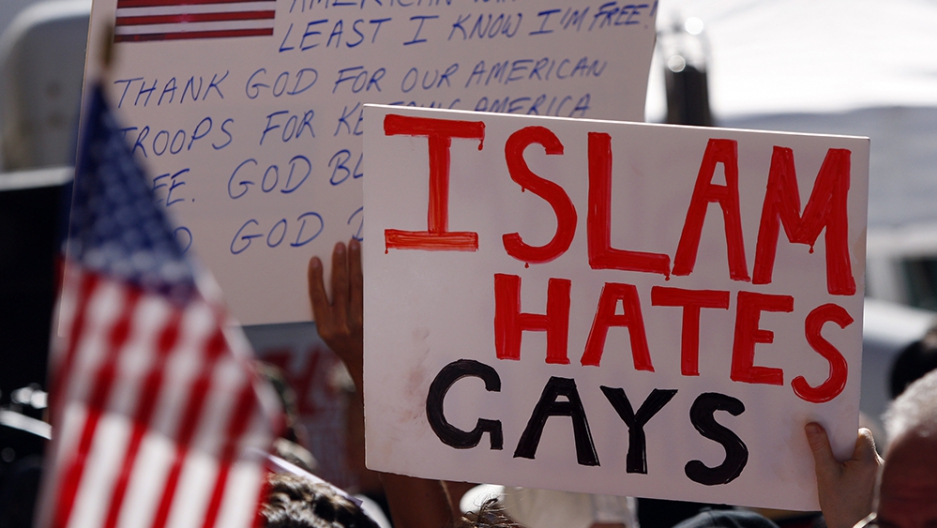 People display signs at a demonstration against the proposed Islamic cultural center and mosque on the ninth anniversary remembrance of the attacks on New York and Washington, in New York, September 11, 2010.

Searches for anti-Muslim phrases on Google have spiked significantly after the Orlando mass shooting, the first such time since the Brussels terrorist attacks in March.

A check on Google Trends, a tool that measures the search interest of Google search engine users on specific words or phrases, revealed that searches for several anti-Muslim phrases multiplied soon after the news of the shooting broke.

We checked five phrases — "kill Muslims," "Muslims are terrorists," "stop Islam," "hate Muslims" and “Muslim ban” and all of them showed much higher search interest.

To understand the chart, here's a little background on how Google Trends work. It does not provide absolute search volume, i.e., how many times a word has been searched by its users. It shows the search interest in numbers relative to the highest point in the chart. The numbers range from 0 to 100.

The phrase “Stop Islam” was trending on the internet after the Brussels attacks.

The phrase “Muslim ban” refers to Republican presumptive presidential nominee Donald Trump's proposal to temporarily ban Muslim migration to the US. He raised the proposal again on Twitter after the Orlando shooting.

What has happened in Orlando is just the beginning. Our leadership is weak and ineffective. I called it and asked for the ban. Must be tough

According to Google Trends, users who searched for the phrases are mostly from the US, UK, Australia and Canada. But, when the data is limited to just users in the US, the same trend is shown.

The search interest for the above phrases except “Muslim ban” last resulted in a spike after several Islamist terrorists bombed the airport and a metro station in Brussels on March 22.

(Currently we can't show the search interest then and now in the same chart, as Google Trends has yet to update its 90-day chart to include the search data on Sunday.)

The highest surge was seen after the Paris attacks on November 13, and another significant bump was recorded after the San Bernardino attack on December 2.

Experts say the heightened Islamophobia reflected by the search interest plays right into the hands of ISIS. Generating hostility between Muslims living in the West and their fellow citizens through terrorist attacks has always been part of ISIS's strategy. The Intercept has reported that ISIS published a statement saying its attack on the office of French satirical magazine Charlie Hebdo in January 2015 was to further polarize the society.