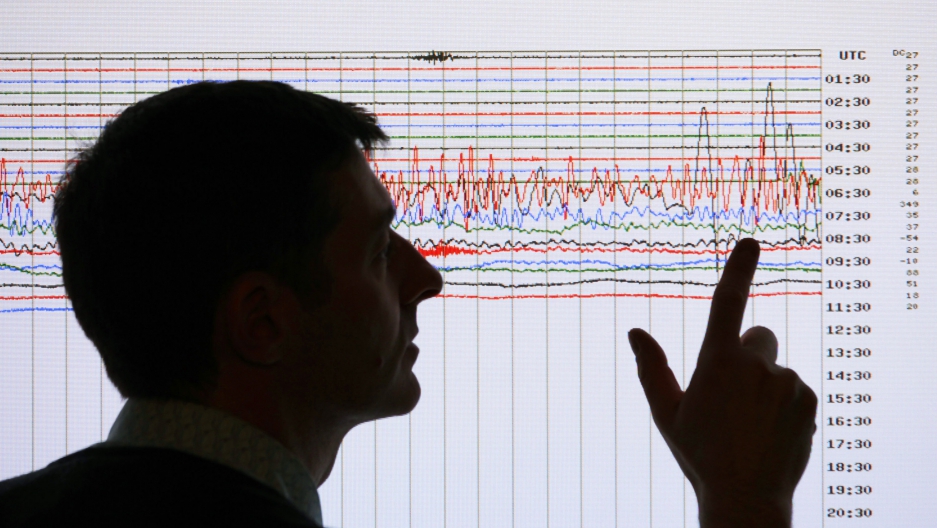 A seismologist poses for the media as he points to a seismographic graph showing the magnitude of the earthquake in Japan, on a monitor at the British Geological Survey office in Edinburgh, Scotland, March 11, 2011.

Developers are creating apps that can tap into the sensors in your smart device to measure different aspects of your environment, such as your number of footsteps or your heartbeat. And now there’s an app to measure your surrounding seismic activity.

Some 170,000 people have downloaded the app to their phones since it came out in February, and the app has already recorded more than 120 earthquakes around the world. At first Allen expected the app would only be able to record earthquakes greater than about magnitude five, but in fact the app has been successful in recording earthquakes as small as magnitude 2.5.

“These kinds of networks that we're developing now using smartphones, they are never going to replace what I think of as the traditional seismic network. The observation-quality instrumentation ... can record earthquakes on the other side of the globe and so that's really important for the research that we're doing. Also for understanding, you know, the damage that happens in big earthquakes,” Allen says. “But our hope is that this new network — this MyShake network with potentially, you know, in the future maybe millions of sensors — we can really understand much more about the earthquake process; how the earthquake ruptures on the full plane, the impact it has on the buildings, how our buildings vibrate in the earthquake just by the virtue of the fact that we have so many more sensors now.”

In the future Allen even hopes the app might help warn people of oncoming earthquakes.

“Our hope is that we can run this fast enough that we can also detect the earthquakes quickly enough and push warnings to people before they feel the shaking in the future,” Allen says. “Of course, we're working on doing that using traditional seismic networks as well, so we think that MyShake can help make those systems perhaps faster and more accurate in places where there are high quality sensors. However, the real value when it comes to early warning is the many other parts of the world that are earthquake prone but have no seismic network whatsoever, but, as it turns out, often have millions of smartphones that we could use.”

One place where the app might be helpful in getting out an early warning signal? Earthquake-prone Nepal.

“We had two significant damaging earthquakes in Nepal last year,” Allen says. “There’s a very small number of traditional sensors [in Nepal], but there are 600,000 smartphones in Katmandu. So if we can harness those phones to rapidly detect the earthquake, we could potentially provide a warning in places like Nepal.”