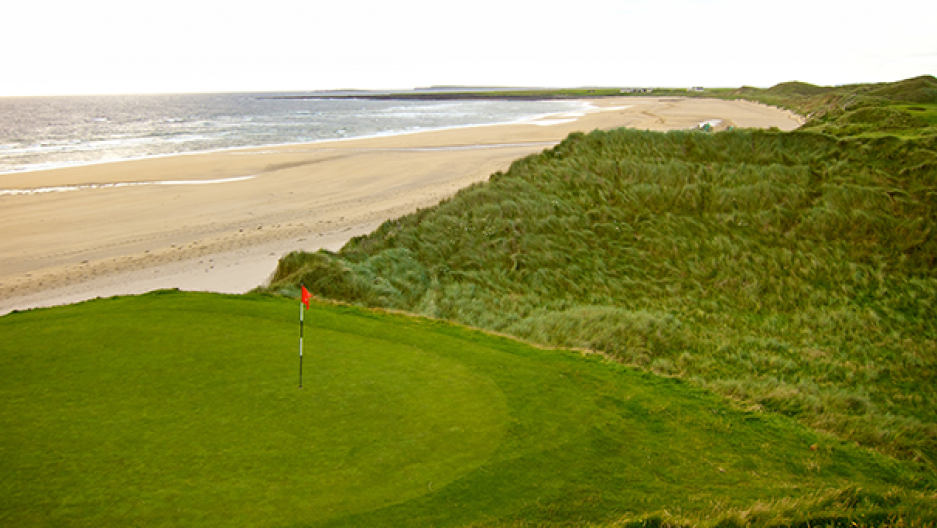 Trump International Golf Links Ireland has told regulators that without erosion mitigation, Doonbeg golf course could lose up to 100 meters of ground in some places before 2050.

During his business career and, more recently, while running for president, Donald Trump has derided the science of climate change. He has even called it a “hoax” created by the Chinese. But that hasn’t stopped him from invoking the dangers of climate change in a bid to protect one of his golf courses from the dangers of sea level rise.

Trump's seaside golf course in County Clare, Ireland — on the western coast, just south of Galway — has suffered from serious erosion. The Trump Organization has filed for permission from the local county planning board to build a seawall that would protect the golf course from future damage.

Politico's Ben Schreckinger, who has been reporting the story, says Trump’s filing explicitly states that global warming and its effects, such as sea level rise and the increased strength of storms, will make the erosion worse over the coming century and is one of the chief reasons they need to build the wall.

Schreckinger says he had been following the story of the wall for months in Irish media. He then began to look deeper into government filings, where he discovered exactly how Trump's firm is arguing the need for a wall.

When Trump bought the golf course, it had already suffered terrible erosion during the winter of 2013-2014, Schreckinger says. It was an unusually stormy winter, with the kind of weather scientists would point to as an example of climate change’s effects. Some parts of the golf course saw 10 meters of erosion over the course of just that winter. One storm, just days before Trump closed on this purchase, took away six to eight meters in one day, Schreckinger says.

Publicly, Trump maintains his skepticism of climate change. He has called it “pseudoscience” and declared, “I'm not a believer in man-made global warming. The weather is changing; it’s always changing.”

Trump has also declared that he would “cancel” the Paris climate agreement, saying it is "bad for US business.” He also said the pact allows "foreign bureaucrats control over how much energy we use,” which is factually untrue. Under the deal, countries set their own emission limits; they are not regulated by any outside group or organization.

Schreckinger notes that Trump’s views on climate change put him out of step with about two-thirds of the US electorate. At the same time, he says, “we haven't really seen many people voting on the basis of climate change as an issue. We've seen advocacy groups try to make it an issue that people are voting on, but so far they've had very little success doing that.”

On the other hand, Schreckinger says, the inconsistency between Trump’s public statements and his actions to protect his private holdings could feed into the narrative, promoted by his then-Republican primary opponents, that Trump is deliberately misleading the American people.

Schreckinger is already unpopular with the Trump campaign. In March, the campaign took away his press credentials and kicked him out of a press conference in Florida. This new story is unlikely to improve the relationship.