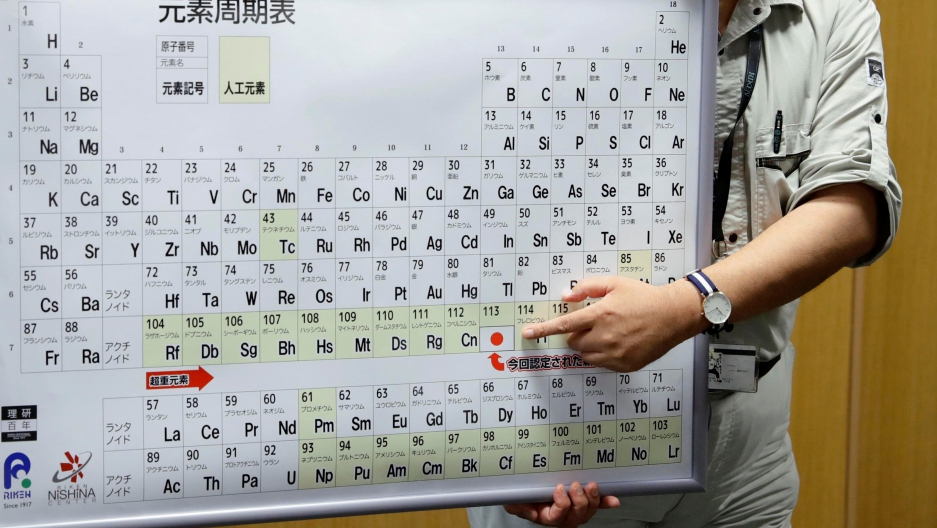 Kyushu University professor Kosuke Morita, head of a team of scientists who discovered element 113, points to the superheavy synthetic element on a periodic table at a news conference at the RIKEN institute's research centre in Wako, Saitama Prefecture, Japan June 9, 2016.

It might be a surprise how much time and deliberation goes into naming elements — five more months will pass before the latest names are set in stone. For chemistry buffs across the globe, these names are more than just a label.

This excitement is especially prevalent in Japan, as nihonium is the first element to be discovered in an Asian country. Eric Scerri, UCLA chemistry professor and expert on the periodic table, believes the Japanese have good reason to be proud.

“I think it’s a very big deal. In fact it occurred to me that this was almost the scientific equivalent to Hillary Clinton becoming the first woman to be nominated for a U.S. presidential election,” Scerri says. “It’s a first.”

With the research led by Kosuke Morita from the RIKEN Nishina Center for Accelerator-Based Science, Asia can be an official contributor to the periodic table. As of now, elements have yet come out of laboratories in Oceania or Africa.

“Science has been a pretty much exclusively Western affair, at least as far as naming of elements has been concerned,” Scerri says.

The national pride can be sensed within the word itself, as nihonium is dubbed after “Nihon,” the Japanese word for Japan. The process for naming elements is long and detailed, as the proposed names must conform to a specific set of guidelines monitored by the International Union of Pure and Applied Chemistry (IUPAC). Elements can be named after minerals, places, elemental properties, scientists, and even mythological characters.

Scerri referred to the element thorium, which was named after the Norse god Thor. This is just one instance of when element naming has extended beyond the realm of science.

For the next five months the status of these names will be open for comment from the general public. Considering the periodic table exists as a universal tool, the globe will have a chance to weigh in on the new additions.

“This is highly symbolic because of the status of the periodic table, this is sort of a sacred chart for chemists and physicists, and in fact all scientists,” Scerri says. “To actually be enshrined on that table is the significant thing.”

With nihonium soon to occupy a spot on the periodic table, Japan is basking in the light of scientific fame.