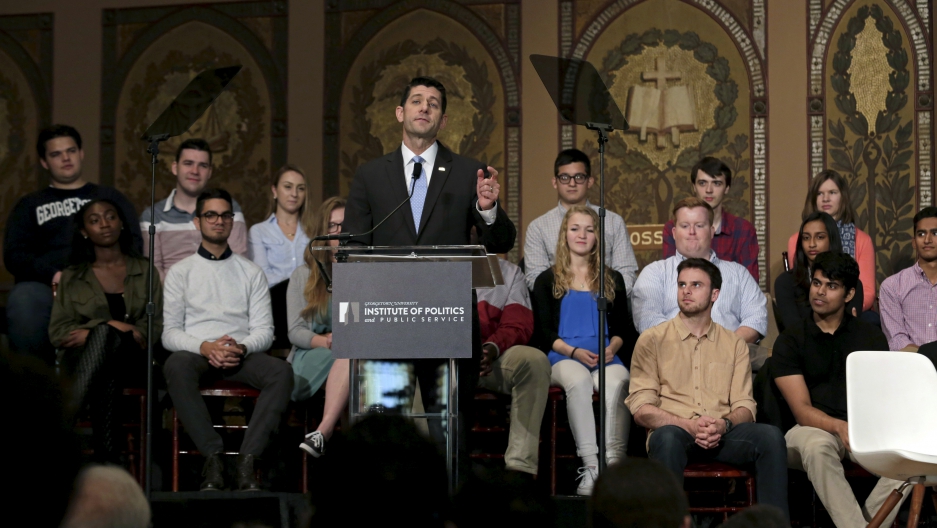 US House Speaker Paul Ryan peaks during a town hall with millennials at the Georgetown Institute of Politics and Public Service in Washington, U.S. April 27, 2016.

Record numbers of young people turned out to vote in the primaries and caucuses this year, and many voted for Sanders. But as demographics shift (according to the Pew Research Center, about half of millennials identify as independents), how does this seemingly unaffiliated generation plan to govern in the future?

Steven Olikara, president and co-founder of The Millennial Action Project, is hoping to bridge the divide in the political world through millennial leadership and entrepreneurial approaches to policy. He says that Sanders’ success among millennials tells a bigger story.

“It shows that millennials are willing to challenge existing institutions,” he says. “In addition to that, millennials are looking for authenticity — polls consistently showed that [voters viewed] Bernie Sanders as the most authentic candidate, and he ranked the highest on the honesty and trustworthy scale. I think millennials gravitated towards that.”

But American bureaucracy does not adapt quickly. Rather, the machinery behind public policy often serves the status quo. How does that model hold up for Uber-loving millennials that rapidly embrace change? Olikara says young people are using government dysfunction to their advantage.

“In 2013, in the wake of the government shutdown, we launched the nation’s first-ever bipartisan youth caucus,” he says. “[It was] the first time in our country that the youngest members of Congress — Democrats and Republicans — came together in a generational unification to focus on the issues that we’re going to inherit in the long term.”

Social media and the sharing economy are changing the way that politics is both debated and funded, Olikara says. Additionally, he argues that discontent is changing the equation.

“When we see a breakdown in our political system, there’s an opportunity for a breakthrough and a new generation of leaders,” he says.

As young leaders rise in the ranks and millennial entrepreneurs turn their attention to politics, they’re also pushing to change the infrastructure of American government, and Olikara says that it’s a concept that doesn’t seem so far fetched.

“I mean, the Founding Fathers were basically millennials,” he says. “James Madison was 29 years old when he was elected to the Continental Congress, and he authored the Constitution when he was 36 years old. Thomas Jefferson was 33 when he wrote the Declaration of Independence. These were young upstarts who created our country. It’s very much in the spirit of our founding fathers that this generation — millennials — have the opportunity to reinvent our democracy.”