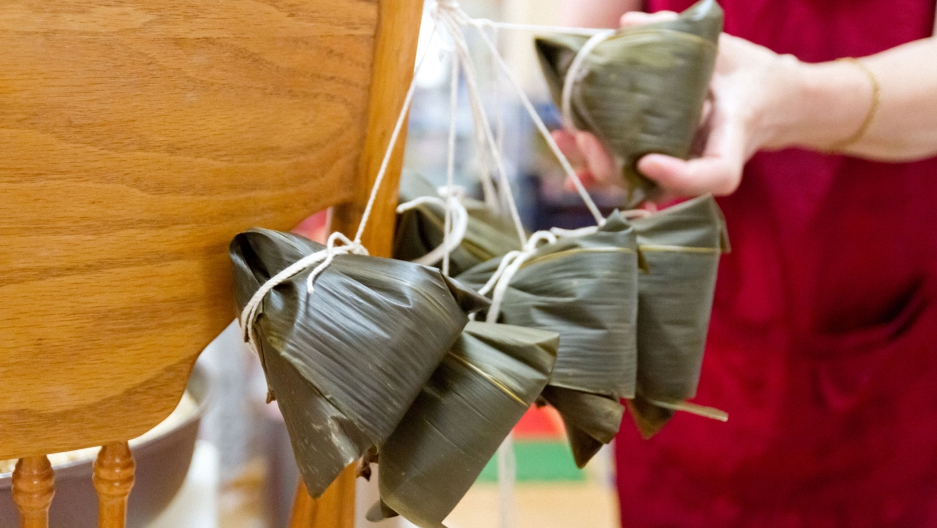 Eva Chou demonstrates the traditional method of tying Taiwanese bah tsang rice dumplings for the Dragon Boat Festival. She’s a bah tsang “aunty,” an expert in making the much-loved savory treat — which many American-born Taiwanese don’t know how to make.

In her San Jose home, 66-year-old Eva Chou folds, stuffs and ties 10 bamboo leaf packets in less than 20 minutes and lowers the bundle of dumplings into a pot of boiling water. She used to own a Chinese restaurant and says that in her heyday, 10 or 15 years ago, she made 2,000 of these savory treats each year.

“I bought a Chinese restaurant when I came to America in the 1990s,” says Chou. “I was 44 years old when my sister taught me how to make bah tsang.”

She’s now retired from the restaurant business and only makes a few dozen dumplings each year, mainly for her family. Her two adult sons, she says, have no interest in learning the tradition.

You can find leaf-wrapped rice dumplings — zhong zi in Mandarin and bah tsang in Taiwanese — at dim sum restaurants or Asian delis most any time, but cooks are especially busy wrapping and steaming this week because of the Chinese Dragon Boat Festival, Duan Wu in Mandarin. Legend has it that the after the heartbroken ancient Chinese poet Qu Yuan threw himself into a river, friends and family threw leaf wrapped packets of rice into the waters to keep hungry fish from devouring his body while search boats raced to find him. The holiday coincides with the summer solstice and falls on June 9 this year.

While the bamboo-leaf wrapped dumplings are popular throughout China and among the Chinese diaspora in Southeast Asia, the triangular shaped packets are elevated to a national icon in Taiwan, where they are a reminder of simpler times during the island’s agricultural past. Bah tsang are the subject of a folk song sung by street vendors and tiny fabric dumplings can be found in gift shops. 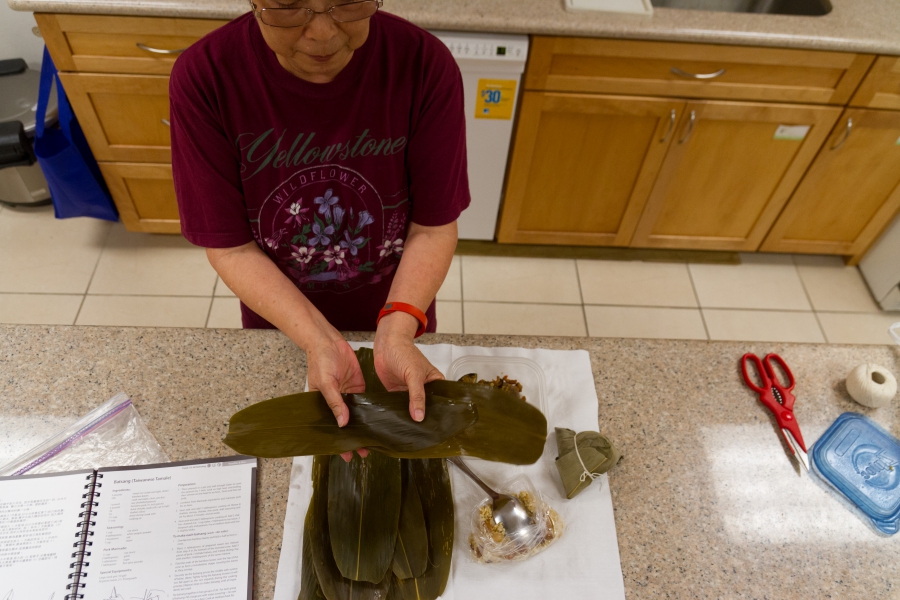 But many Taiwanese Americans who were born here say they have no idea how to make bah tsang. The fillings — sticky rice, braised pork, shitake mushrooms, shallots and sometimes chestnuts, peanuts or boiled eggs — are simple, but the wrapping technique is tricky. The bamboo leaves must be gently overlapped, then twisted to form a cup. The rice and other fillings are carefully packed in and then the leaves are folded and tied shut with string.

“With the rapid pace of life, more and more young people choose to buy from the markets,” says Patricia Cheng, spokesperson for the 99 Ranch Market chain, which carries frozen rice dumplings made in factories in China or Taiwan, as well as freshly made dumplings in the hot deli steam tables during the three weeks leading up to the Duan Wu festival. 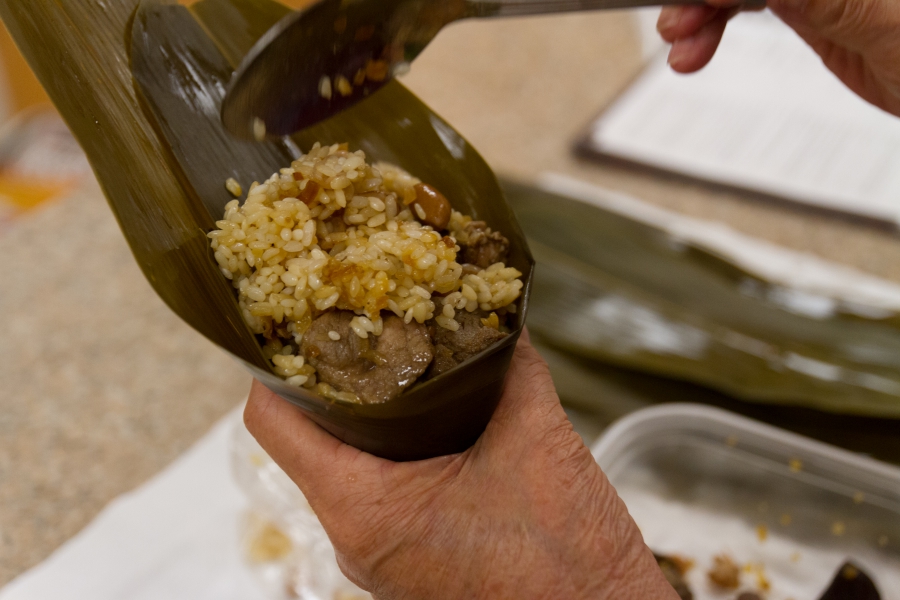 But many Taiwanese Americans rely on the more homemade taste from “aunties” — vendors who sell bah tsang through informal networks. It’s not a coincidence that bah tsang is sometimes translated as “Taiwanese tamales” — they circulate among Taiwanese and Chinese Americans in much the same way as tamales are sold in Latino communities.

Immigrants, usually women in their 50s or 60s with limited English skills, might ask their friends to solicit orders amongst their colleagues at high tech companies, Chinese language schools or other community groups.

“Sometimes an admin would sell them to make extra money,” says Jonathan Lee of the bah tsang economy at the New Jersey office of a Taiwanese-owned company where he used to work. “Each week, they would send out a registration sheet.” Lee says that even in Taiwan, many urban families don’t make their own bah tsang. It’s something more common in the rural communities in the southern part of the island. 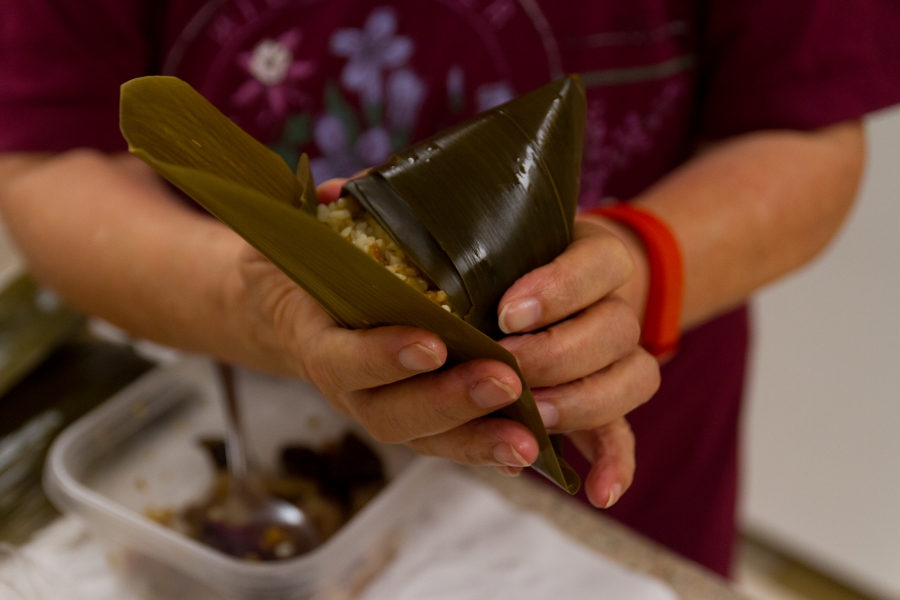 “My daughter doesn’t have time [to make bah tsang],” says Yu, of Milpitas, Calif. “She lives in Wisconsin and her husband is Norwegian so they eat Western style.”

Other home cooks use secret Facebook groups where they post photos of the food with price lists and delivery information. But every known bah tsang vendor I contacted either denied selling them or refused to be interviewed about their business.

“My speculation is that they either are concerned with income tax or health department regulations,” says Pam Tsai, president of East Bay Taiwanese Association, a community group in the San Francisco Bay Area.

In the past, organizations such as hers have hosted bah tsang social events, where older immigrants taught younger American-born members of the community the age-old techniques. But Tsai says interest in the events has dwindled, so the program has been discontinued.

“My daughter doesn’t have time,” says Julie Yu of Milpitas, Calif. “She lives in Wisconsin and her husband is Norwegian so they eat Western style.” 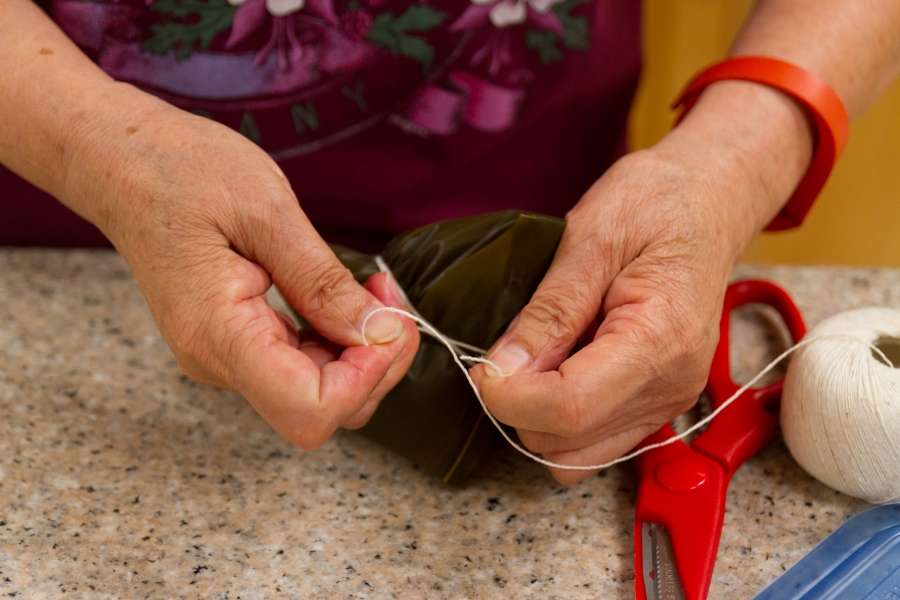 Yu ties a string around a bundle of bah tsang. She’s now retired from the restaurant business and only makes a few dozen dumplings each year, mainly for her family.

Yu, 75, has been in the US since 1979 and wants to preserve the cultural institution of bah tsang, though. She includes detailed instructions for making the dumplings in Taiwanese Homestyle Cooking, which the North American Taiwanese Women’s Association published in 2013. Like a church cookbook, the spiral bound volume includes family recipes from women like Yu along with photos of the finished dishes.

Ho Chie Tsai, 44, founded the website TaiwaneseAmerican.org, which features articles about cultural events and prominent Taiwanese in the US. Even he doesn’t make bah tsang. But it’s not because he doesn’t care for the tradition. One of the most popular gifts for donors to the site is a T-shirt that features a graphic of the iconic bundles above the words “wrap, steam, serve.”

For Tsai, eating a leaf-wrapped rice dumpling helps him understand his parents and the hardships their generation endured after World War II, when the island was under martial law and common people often didn’t have enough food to eat.

“It’s a handful with a little bit of everything,” says Tsai, making a fist. “And it’s just enough.”