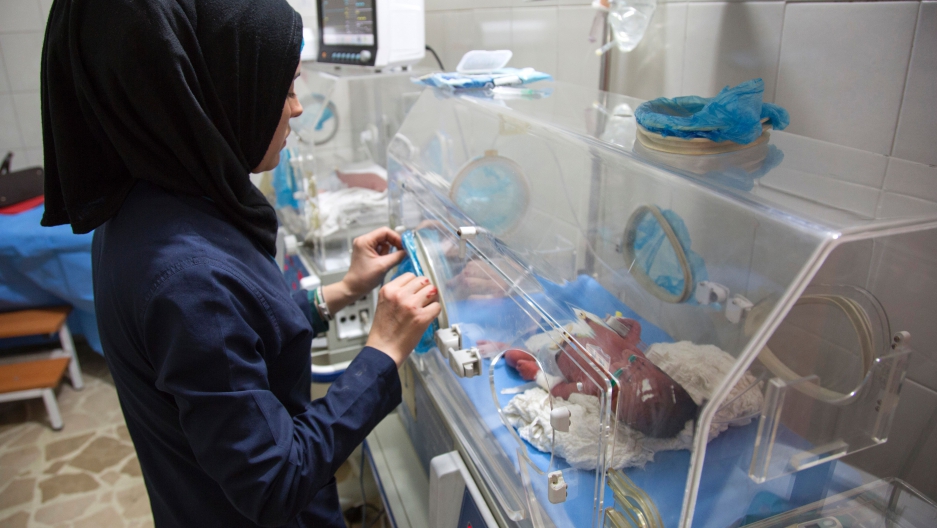 A Syrian nurse stands next to incubators with newborns who were evacuated by medical staff at a children's hospital into the basement following reported government bombardment on June 9, 2016.

Terrified medical staff rushed to rescue nine newborns after heavy bombing near a children's hospital in Syria's divided Aleppo city, according to the leading pediatrician there.

In a statement published by The Syria Campaign advocacy group, Dr. Hatem, the chief of the Al-Hakim children's hospital, described the aftermath of a raid that struck just outside the facility on Wednesday.

"It was a horrible moment. The nurses were trampling each other to rush the babies to the basement, while many of them started to cry," said Dr. Hatem, whose full name was not disclosed.

Government bombardment of rebel-held eastern Aleppo hit within a few hundred yards of three medical facilities on Wednesday, including near Al-Hakim and near the Al-Bayan hospital, leaving at least 15 civilians dead.

At Al-Hakim, nurses were worried the newborns would breathe in the dust and debris in the wake of the raid, Dr. Hatem said.

"As my staff moved the incubators, I went to tell the people in the waiting room to leave the hospital. I ordered them to 'Leave now! There might be a second attack,'" Dr. Hatem said.

"We expected that it would happen one day, and today is that day. There are now only 18 incubators left in eastern Aleppo." 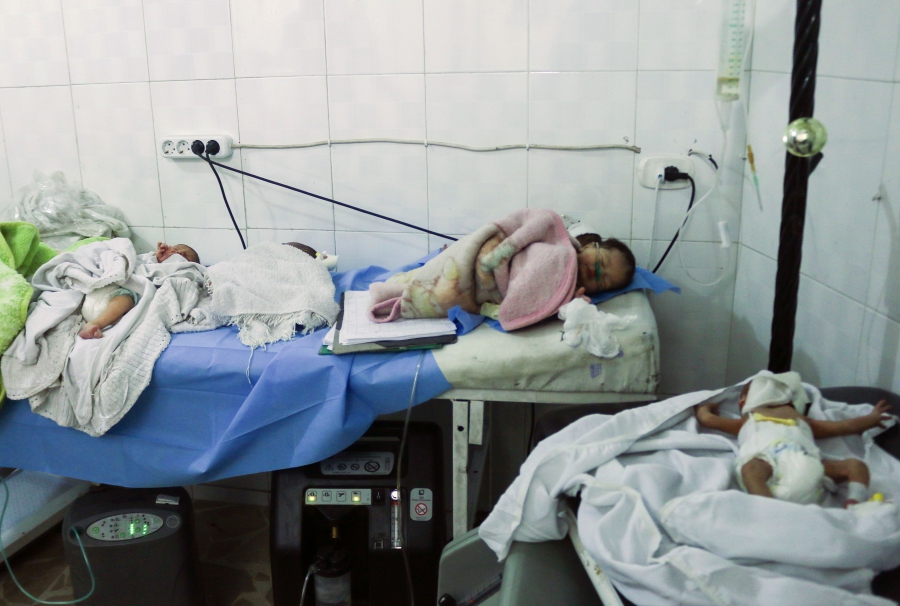 Syrian newborns who have been evacuated by medical staff from a children's hospital in the rebel-held eastern Aleppo following reported government bombardment.

The newborns all survived but the hospital was left inoperable.

Founded in mid-2012, the hospital has been forced to relocate multiple times in fear of government raids, said its funder, the Independent Doctors Association.

Syria's brutal conflict has killed more than 280,000 people and has seen hospitals destroyed across the country.

In April, Dr. Hatem mourned the death of his colleague Mohammad Wassim Maaz, killed in an airstrike at Aleppo's Al-Quds hospital.

Dr. Hatem pledged to repair and reopen the Al-Hakim hospital, which served roughly 3,800 patients each month.

"I want every president to imagine that one of these newborns were his own son or daughter. Whatever they would do for their sons if they were bombed, they must do for these newborns."

Doctors in opposition-controlled parts of Aleppo city have raised alarm over medical conditions there, particularly as the last route out into the rest of the province is under near-daily bombardment.

"Aleppans' options are running out," said Dr. Samah Bassas of the Syria Relief Network, an umbrella organization of 60 humanitarian groups in Syria.

"The bombs we are used to. But if we are to be held under siege, hunger and disease will quickly take hold. Even more death is inevitable," she said.