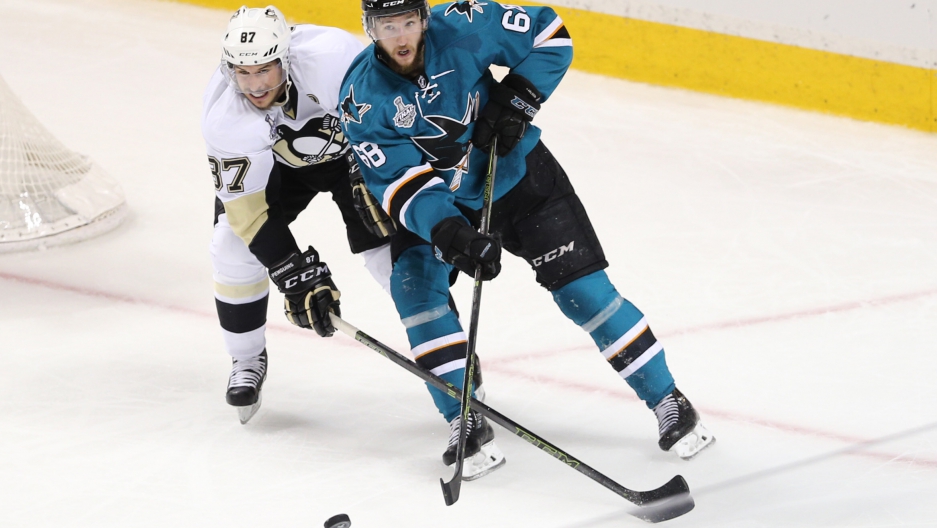 Pittsburgh Penguins center Sidney Crosby (87) tries to knock the puck off the stick of San Jose Sharks right wing Melker Karlsson (68) in the third period in game four of the 2016 Stanley Cup Final at SAP Center at San Jose.

It's Game 5 of the Stanley Cup playoffs, and the Pittsburgh Penguins have a commanding lead over the San Jose Sharks. The Sharks, playing in the first Cup finals in their team's history, are down three games to one. The Penguins have been stellar in this series so far, with star Sidney Crosby itching for his second Stanley Cup victory.

Now, if you've watched any hockey, you'll know how announcers typically call a goal: Yell the name of the player, and let the celebratory horn carry on.

That's not how Harnarayan Singh calls goals. He's the host and play-by-play commentator for Hockey Night in Canada: Punjabi, and he often sounds more like Latin American soccer announcers, chanting the names of the players over and over and melodically drawing out the syllables.

Singh, whose great-grandfather one was one the first Sikhs to immigrate to Canada, says he'd always dreamed of becoming a hockey announcer.

"You know, I was obsessed with the sport, and you know, growing up in a small town in southern Alberta where there wasn't any other visible minorities, hockey was the icebreaker for me amongst my classmates," he recalls.

Hockey Night in Canada: Punjabi is in its ninth year, and Singh says the broadcast has helped spread the sport in the country's large Punjabi community. After English and French, it's the next most common language in Canada.

"People find that they have have more camaraderie amongst their colleagues at work because they're able to participate in those conversations about last night's game," he explains. "We also have amongst the immigrant families, and the grandkids born here have a natural inclination to liking hockey. And because of the broadcasts now in Punjabi, they're able to understand the game and three generations are watching hockey together, it's a tradition now in their family household."

All this has been pretty great for Singh, who attended broadcasting school in Canada to become a hockey announcer.

"It's amazing, I mean it proves that it's not just fun and entertaining, it's bridging the gap between immigrants and their new country, and it's a great way to show how multiculturalism can work," he says.

This year, Singh and his team are enjoying some fame in the US as well, thanks to this viral "Bonino" goal call from Game 1. Singh gives credit to his passionate co-hosts and production team, and their relatively new social media staff.

In fact, he learned from this series that his show already had a lot of fans from the sizable Punjabi community in California's south Bay Area. Unfortunately, those San Jose fans haven't been hearing a lot of Singh's goal calls in their favor.

"You know as a broadcaster, I've been following the sport so long I was happy for [Joe] Thornton and [Patrick] Marleau and the gang to finally make it there, but it's almost as if they've already won their Stanley Cup — beating Los Angeles was such a big deal and making the final for the first time in their 25-year franchise history, it's almost as if that was their cup," he says.

Singh says the Penguins — who won the cup in 2008 — are his favorites to win the series.

"San Jose, they've had the best road record in the league this season, so I think they're going to pull off another victory to stay alive," he says. "But it seems like the Penguins are, you know, obviously the better team in this round so far."

Singh hopes that he could one day see a Punjabi player in the NHL. Minorities of any kind are a rarity in the sport, but Singh says there's already an uptick of young Punjabi kids signing up for hockey.

“The Edmonton Oilers drafted Jujhar Khaira, and he's a Punjabi boy, and the Everett Silvertips in Washington out west, they even had an all-Punjabi line a couple of years back," he explains. "So I think the seeds are being planted, and I think that's going to help grow our show, and it's also going to help grow the popularity of the game within the community once the community sees familiar faces on the ice and in the NHL, so that's the next step for sure.”

This story was from The Takeaway, a radio show that invites you into the national conversation.