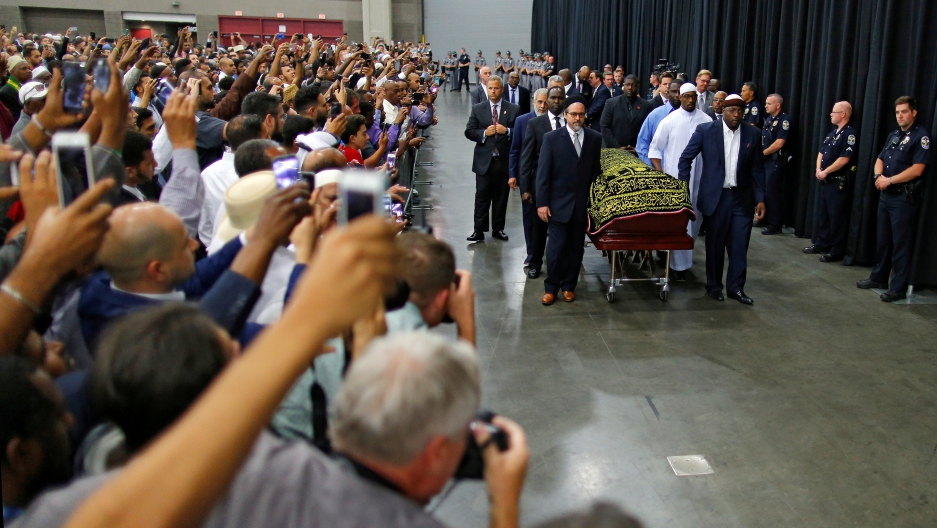 Worshipers and well-wishers take photographs as the casket with the body of the late boxing champion Muhammad Ali is brought for his jenazah, an Islamic funeral prayer, in Louisville, Kentucky, U.S. on June 9, 2016.

The Muslim funeral for Muhammad Ali was held in The Champ’s hometown on Thursday, at the same venue where Cassius Clay won some of his early victories in the boxing ring.

Freedom Hall in Louisville was packed with thousands of people, including Muslims from around the world, who came to pray and pay final respects to the man they called “the people’s champion.”

Muhammad Ali, who died Friday at the age of 74, was a religious man. He converted to Islam in the mid-1960s under the guidance of his mentor Elijah Muhammad, leader of the Nation of Islam.

“Ali did more to normalize Islam in this country than perhaps any other Muslim in the history of the United States,” Sherman Jackson, the Muslim scholar also known as Abdul Hakim Jackson, told those in attendance.

Jackson said that Ali, “put the question of whether a person can be a Muslim and an American to rest. Indeed, he KO’d that question. With his passing, let us hope that that question will now be interred with his precious remains.”

The Islamic prayer service, called a janazeh in Arabic, was planned by Ali himself. People of many faiths were there, with the crowd estimated to be about 16,000 people.

With all the accolades for Ali over the last week, it is easy to forget just how much mainstream white America disliked him at one point. One example came in a 1968 television interview. It was after Ali was stripped of his heavyweight title and banned from professional boxing for refusing to serve in Vietnam.

When Ali introduced himself to the British host, he made it clear that he was not just a professional fighter.

“I am a minister of the religion of Islam also,” Ali said.

Co-host David Susskind wasted no time laying into Ali, his views and his religion.

“I find nothing amusing, or interesting, or tolerable about this man. He’s a disgrace to his country, his race and what he laughingly describes as his profession. He is a convicted felon,” Susskind said. “He’s a simplistic fool and a pawn.”

But Ali was never one to back down. Not in the ring and not from criticism about his beliefs.

In one exchange captured on film, Ali got into it with a group of white college students in the late 1960s and defended his opposition to the war in Vietnam by saying, “You my enemy. My enemy is the white people, not Viet Cong.

Some of the same things that made Ali unpopular with many Americans also helped boost his global reputation, and not just as a boxer.

“I grew up in Iran,” says Omid Safi, an Islamic scholar at Duke University. “And Muhammad Ali was the only Muslim in the Western Hemisphere that I was aware of.”

“To have the heavyweight champion of the world, who is a Muslim, and is a critic of war, racism, colonialism and imperialism, made him just about the coolest human being walking on the face of the planet.”

Safi says Ali’s own story parallels the larger one about Muslims in America. Up until 1970, most Muslims in the US were part of the Nation of Islam, just like Ali.

But by the mid-1970s, Ali had left the Nation of Islam, an African American religious movement, and moved toward mainstream Sunni Islam as it’s practiced around the world.

Ali never stopped speaking up for his beliefs.

After the September 11 attacks, though he suffered from the effects of Parkinson’s Disease, Ali went on television to say that the terrorists responsible for the attacks did not represent true Islam.

More recently, Ali responded to Donald Trump’s proposed ban on Muslims entering the US. He issued a statement describing himself “as someone who has never been accused of political correctness.”

It said, “our political leaders should use their position to bring understanding about the religion of Islam and clarify that these misguided murderers have perverted people’s views on what Islam really is.”

For Thursday’s funeral service, in accordance with Islamic tradition, Ali’s body was washed, anointed and wrapped with simple pieces of fabric. The presiding imam said Ali planned everything, and that he “planned for it to be a teaching moment.”