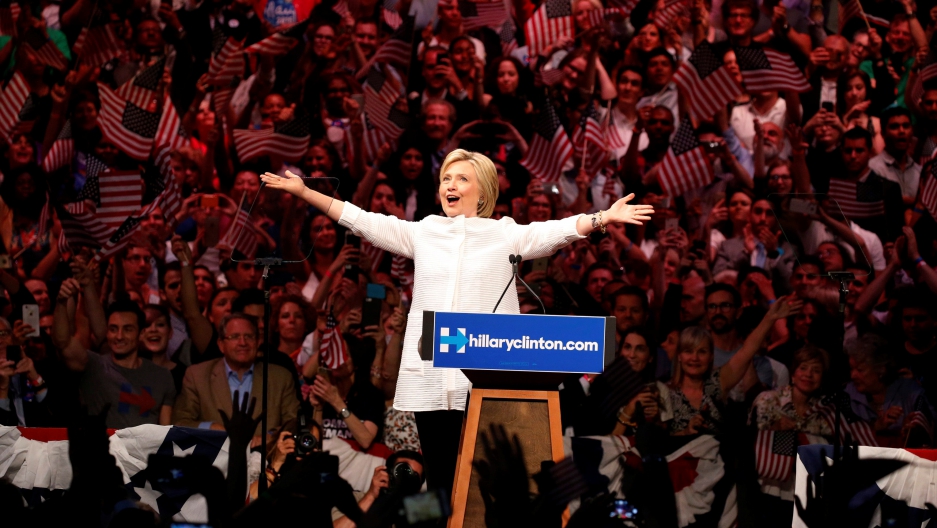 Hillary Clinton arrives to speak during her California primary night rally held in Brooklyn. Clinton declared herself the Democratic Party nominee, saying she had made history as the first woman to lead a major party in a race for the White House.

For the first time in US history, a woman is a major party's presumptive nominee for president.

After primary wins in New Jersey and California on Tuesday night, Hillary Clinton and her supporters at home and abroad are celebrating the historic milestone.

Ian Higham is a Clinton supporter from Pennsylvania living abroad in Stockholm, Sweden. Back in March he told The World most Americans he meets in Sweden are Bernie Sanders-supporting Democrats.

"You don't really meet Republicans living in Scandinavia," he said. "It's pretty rare for them to want to live in a country with such high taxation."

Higham says he's pleased with the primary results, but offers harsh critisism of Sanders, who has not ended his campaign since Clinton's edge over him became clear.

"It is not the most honarable way to go about his campaign," Higham says. "It shows poor leadership not to drop out and allow the party to rally around Hillary."

As Clinton shifts focus toward her contest with presumptive Republican nominee Donald Trump, questions of gender are sure to remain in focus. Higham says Swedes don't view the presidential race in terms of gender, though.

"For [Swedes], it's not even a question that women should have equality," he says. "They maybe take for granted how extensive equality is in Sweden and don't consider the context in the US as much."

However, Sweden, like the United States, has never had a female head of state.

Most of the American Democrats living in Sweden are Sanders supporters. But Higham claims they're nonetheless happy about Clinton's nomination, which comes at a time when Swedes fear the growing power of populist movements in their country.

"[Swedes] are excited that there is a female candidate ... and that she poses a strong challenge to Donald Trump," Higham says.