Conservative politician Boris Johnson's hair is blowing in the wind.

Seen those diptychs doing the rounds on Twitter lately, of Donald Trump and another blond guy, both looking kind of demented, with hair about to take flight?

Or, perhaps you’ve seen snaps of a mural in Bristol, England, featuring Trump locked in a passionate embrace with that same blond guy?

In case you were wondering, that guy is Boris Johnson.

Boris, you know. BoJo. The former mayor of London, who led the British campaign to exit the European Union, known as “Brexit."  (UPDATE: With the Brexit victory on Thursday and the announced resignation of Prime Minister David Cameron, his projectory is seen as upward). 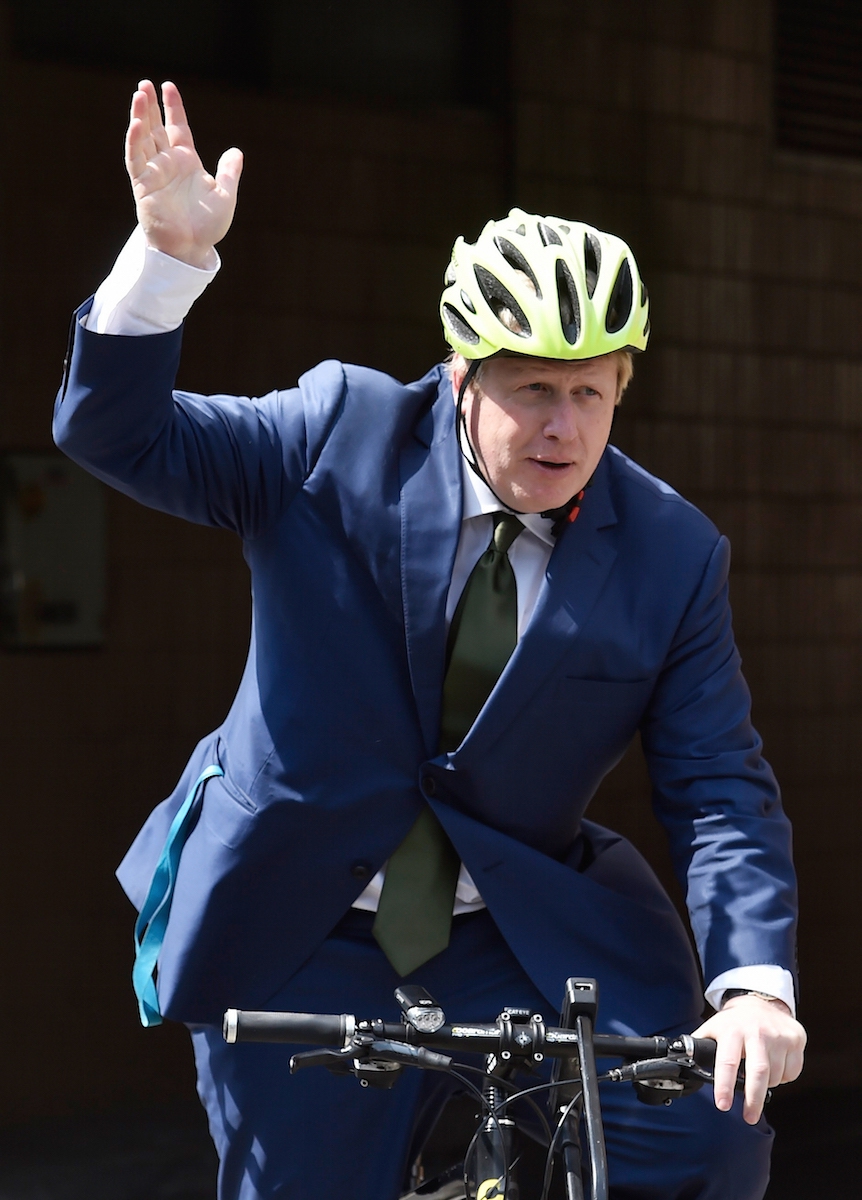 Boris Johnson bikes off after his speech at a Vote Leave rally in London on May 9.
Credit:

The 51-year-old Conservative Party politician is often seen balancing precariously on a bike in peak traffic — like “a haystack on a bicycle,” they say. But, lately, he’s been touring the UK on his “Brexit bus,” preaching the supposed evils of EU membership in what many see as a barefaced bid to become prime minister.

He shares with The Donald his idiosyncratic blondness and a propensity for sounding bonkers.

“He and Trump are highly cartoon-able,” says Quentin Letts, a seasoned parliamentary sketch writer with the Daily Mail. “They grab attention, not only in drawings, but also in words.”

Words like “Hitler,” used when likening the EU’s ambitions to the Führer’s dream of a Nazi European empire. Or, suggestions that US President Barack Obama's “part-Kenyan” heritage had driven him toward anti-British sentiment.

Accused of dog-whistle racism, it looked like BoJo was going down. But, the bumbling Brexiteer remains ever buoyant.

“The image that sticks in people's minds is that he dared to stand up to Obama,” says Andrew Gimson, author of “Boris: The Rise of Boris Johnson.”

Undoubtedly, Johnson has charm. There's still something of the 5-year-old who painted “Boo to grown ups!” on his playroom wall, says Gimson. Add to that, the cast-iron confidence of one educated at Eton College and Oxford University and you have, well ... the makings of a monster?

This is where the BoJo sleight of hand comes in.

In the early ’90s, Sonia Purnell worked with Johnson for The Telegraph in Brussels, observing first-hand how he deployed his buffoonish airs to outsmart rival journalists. “If you're going around with messy hair and a tatty suit on a bike, you can't be that threatening,” she says.

Boris Johnson attending the unveiling of a recreation of the Arch of Triumph in Palmyra, Syria, at Trafalgar Square in London on April 19.

She reckons the hair is deliberately mussed. “When I knew him, his hair hardly moved!” she says. Indeed, photos in “Just Boris,” her biography of Johnson, show a bowl cut so well combed it could have passed for a tin helmet.

As a journalist in Brussels, Johnson never let the facts get in the way of a good story. His souped-up stories of Brussels bureaucrats regulating everything from the curvature of bananas to condom sizes helped unleash the forces of right-wing euroscepticism that would go on to split the British Conservative Party. That led to today's curious scenario of Conservatives battling Conservatives to leave the EU, with Johnson leading the malcontents in an all-out rebellion against their own party leader, Prime Minister David Cameron.

Now gunning for his boss's job, Johnson still has the tabloid touch — hence the hullabaloo over Hitler. “He’s doing a Trump thing. It doesn't matter whether what he says is true, as long as he gets loads of media coverage,” says Purnell.

To the untrained eye, Johnson comes across as the ultimate English "toff" (Britspeak for the very well-to-do), flaunting his aristocratic privilege, while flouting the boring rules binding lesser mortals. But his appetite for high-wire performance may come from a more unsuspected place. From Turkey, to be precise.

It’s where the blond hair originated, when a Circassian slave girl married a Turkish wax merchant, producing a son named Ali Kemal. A journalist and politician (sound familiar?), Johnson's great-grandfather was also a reckless sort, who met a savage end after falling foul of the Ataturk regime.

Strictly speaking, BoJo’s real name should be Boris Kemal. But the family changed the name, vaulting up the social ladder to the pinnacle of British society. Today, with his posh accent and artful blundering, Johnson out-toffs the toffs.

“He’s a pantomime toff, slightly hammed up, slightly exaggerated, slightly ironic,” says Toby Young, onetime contributing editor at Vanity Fair, who also worked with Johnson at The Spectator, a British conservative magazine. “It’s an elaborate disguise, which doesn't pretend to be anything but a disguise.”

So what could he be hiding, or not hiding while pretending to hide?

“There is a vulnerable side to Boris,” Purnell says. In “Just Boris,” she recounts his mother’s mental breakdown, in part attributed to his father’s womanizing. “Those kids were left to their own devices,” she says. “His vulnerability is what makes him seem human.”

But, don't be fooled, she warns. “He was and is the most ruthless person I’ve ever met. Nothing stands in the way of his ambition.”

Then-Mayor Boris Johnson took part in a tug of war with members of the armed services to launch the London Poppy Day, outside City Hall, in London, on Oct. 27.

Being BoJo, he does it all with a cheerful smile, disarming journalists with his buffoonish humor.

In this respect, BoJo and The Donald are similar, both deploying explosive tactics on issues like immigration, emerging with broad smiles from the fallout.

“Conventional politicians manage the media. Boris plays the media like a violin. He embraces the controversy,” says Young. “It's a style of doing politics. Conventional wisdom holds that it's less effective, but it's not always so.

“Trump is similarly unstilted and spontaneous,” he says.

In this era of ratings-led, post-truth politics, Johnson's rise seems assured. Voters, turned off by what Letts, the sketch writer, describes as the “grey carpet” delivery of typical politicians, thrill to the unexpected. But, with all the howlers, could BoJo ever be considered credible?

“The rules are changing fast,” says Letts. “Look at Trump. He wasn't credible, but he's doing it.

“Our margins of credibility are being stretched.”