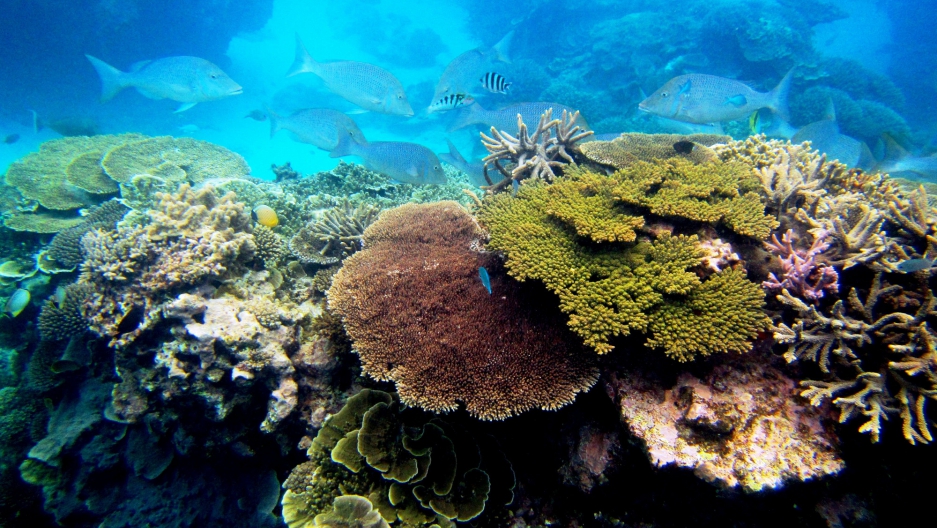 For more than a decade, marine biologist Mary Hagedorn has been cultivating the art of carefully freezing coral sperm through a process known as cryopreservation. Her goal is to bank as many species as possible for use in future research and restoration, and to train other scientists to follow her lead.

“We need to be gathering this genetic diversity and trying to help while there’s still a lot of diversity in place in the ocean,” says Hagedorn, a senior research scientist at the Smithsonian Conservation Biology Institute, who’s based in Kaneohe, Hawaii.

The world’s coral faces an onslaught of threats, both local — such as pollution and sediment buildup — and global, like increasing ocean temperatures and acidity levels stemming from rising greenhouse gas emissions.

Coral bleaching is one particularly noticeable manifestation of coral stress that only stands to intensify with the changing climate. It happens when unusually high or low water temperature causes coral to expel the symbiotic algae that provide them with nutrients.

Case in point: Aerial and underwater surveys taken by Australia’s National Coral Bleaching Taskforce reveal that bleaching has affected 93 percent of the Great Barrier Reef, to at least some degree. Areas hardest hit — in the reef’s northern reaches — have suffered a 50-percent die-off, according to a preliminary release of the findings.

Freezing coral gametes in banks for safekeeping could potentially help researchers and conservationists cope with, and counter, the loss of coral diversity in the wild. The idea is that scientists would be able to draw on these “frozen zoos,” as Hagedorn calls them, for material for use in various types of coral research, such as improving techniques for rearing and restoring coral to reefs.

Because many corals have limited spawning periods, banks also offer greater access to experimental material that would otherwise be obtainable only a few times a year.

Hagedorn had been researching cryopreservation in fish when she became interested in the plight of corals. Developing and fine-tuning a procedure to safely freeze and store their sperm has consumed more than a decade. “It is not a cookbook process,” Hagedorn says. “It took me several years to figure out exactly how to cryopreserve coral sperm, and how to make the freezing process simple and field-friendly so that we could bank under field conditions.” She successfully banked her first sperm about five years ago.

Generally, preparing coral sperm for banking involves gathering coral fragments or colonies on the verge of spawning (many corals are hermaphrodites; each polyp contains ovaries and testes); placing them in individual containers submerged in seawater; and waiting for them to release their egg and sperm together in ethereal bundles, which float upwards like millions of tiny balloons.

Researchers standing at the ready suck up the bundles with pipettes and place them into tubes of seawater. The packages eventually fall apart, with the eggs floating to the surface and the sperm remaining in solution. Then “we create sort of a mini fertility clinic for the corals,” says Hagedorn. 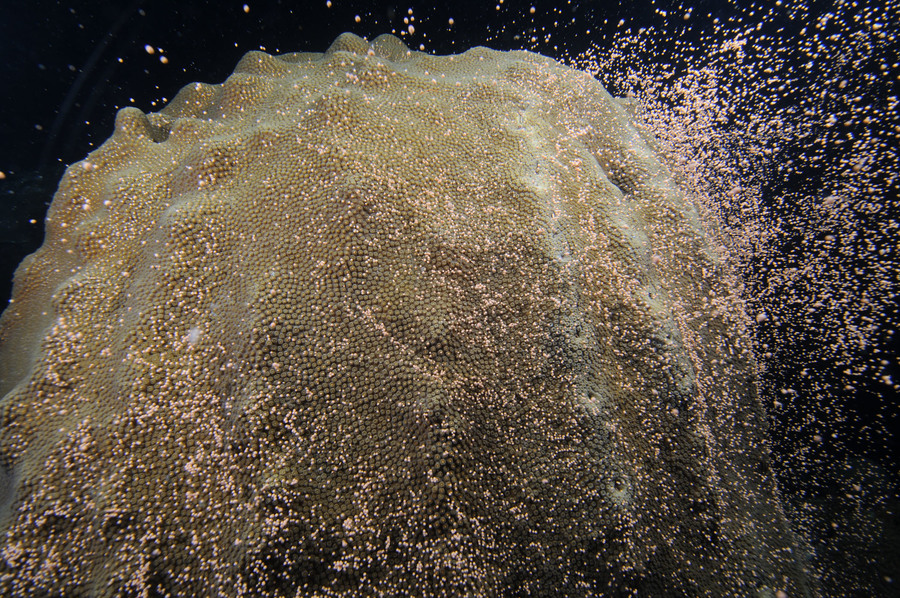 An example of a coral spawning, in this case, the species Orbicella faveolata, or mountainous star coral.

The sperm first undergoes quality control, where researchers inspect samples from each colony under a microscope, scrutinizing sperm density and motility. “It’s pretty tricky work,” says Madeleine van Oppen, a professor of marine biology at the University of Melbourne and one of Hagedorn’s collaborators. “You cannot just collect some sperm and freeze it; you actually need to look at it and make sure it’s healthy enough,” she says, adding that “time is limited, as the sperm remains viable only for several hours after having been released from the colony.”

Researchers place the virile sperm into small vials and apply what’s essentially antifreeze in order to prevent ice crystal formation. Then they plunge those vials into a specially designed apparatus containing liquid nitrogen, which freezes them. After that, most of the vials go into a shipping container that keeps the cool in. “It’s like a Thermos that has special foam in it that holds the temperature for about two weeks,” says Hagedorn.

Those vials are then sent to a bank. Currently, Hagedorn and partners store coral sperm in freezers located at the USDA’s National Animal Germplasm Program — which also houses frozen genetic material from livestock — and Australia’s Taronga Zoo.

(To prove that the freezing process didn’t damage the sperm, the researchers thaw the unshipped vials and conduct another quality control test, which entails fertilizing the fresh coral eggs that they gathered with the formerly frozen sperm to see if they can produce viable larvae capable of settling, or taking root, on a surface, like wild coral larvae do on rocks.)

So far, Hagedorn has banked the sperm of 12 coral species — five from United States and Caribbean waters, and the rest from the Great Barrier Reef. “What that means is, we have billions of sperm cells frozen in our banks,” she says.

Preserving the sperm of 35 colonies of a single species is enough to capture 90 percent of a population’s genetic diversity, according to Hagedorn. Considering that the world has 800 species of coral, banking representative sperm samples of each should be “very doable,” she says — that is, if more research groups join the effort. (So far, Hagedorn’s lab is the only one concertedly honing cryopreservation and banking techniques, she says.)

Deciding which coral to bank in the first place is partly methodical, partly practical. High-priority species include those particularly important to reef building, such as branching corals, which provide lots of nooks and crannies for other organisms to live in. But “it sometimes just comes down to pragmatism,” she says. “What can we get, what is spawning, what will work?”

Hagedorn’s team has been focusing on banking species of the genus Acropora, which include fast-growing, branching corals like elkhorn and staghorn — both designated as critically endangered in the Caribbean by the International Union for Conservation of Nature. They seem to be the most sensitive to bleaching and disease, she says.

One big challenge is getting the timing right. A number of species spawn during a very narrow window, so collecting egg and sperm bundles is a race against the clock. For example, the majority of Great Barrier Reef corals spawn for a few hours, at most, during only two to three nights a year. “It’s actually been an enormous challenge for us to get enough genetic material [from] the Great Barrier Reef,” says Hagedorn.

Some corals’ cycles are, thankfully, more relaxed. “We have a much more extended reproduction period in Hawaii,” says Hagedorn. “It starts in April and goes to September.”

This August, Hagedorn will travel to the Florida Keys, where her team plans to bank staghorn sperm from nurseries maintained by the Coral Restoration Foundation, a nonprofit organization based in Key Largo that rears and restores coral. She’ll also train an international group of researchers in her methods, in the hopes that more teams will adopt them.

Ken Nedimyer, the foundation’s president and founder, is happy to share his corals with Hagedorn’s team — he sees coral banking as a precautionary measure. His nurseries currently house 130 different genetic strains of staghorn coral, about 40 of which are no longer found in the wild. “Every year we have one thing or another happening down here, and we’re losing more genetic material — a whole colony will die, or a population will die, and the genetics of that population is gone forever,” he says. “The last two years have been especially bad due to coral bleaching.”

While Nedimyer’s team focuses on reproducing coral asexually from fragments — which results in genetic clones — they’re also interested in propagating coral sexually. But experimenting with fertilization techniques is difficult when a species only provides fresh gametes annually, he says. With coral banks to draw from, “you would have 12 months out of the year to work with them, and you could do it any time you want.”

There is, however, a key piece of inventory still missing from those banks: eggs.

Corals eggs are much larger than sperm, and figuring out how to freeze them so they don’t develop ice crystals and how to thaw them rapidly without damaging them has been challenging, says Hagedorn. But advances in human egg-freezing over the past several years have inspired her team, and they’ve developed a technology for cryopreserving coral eggs that she says looks promising. If it proves successful, it will “enhance our power tremendously,” she says.

The method might also convince more research groups to start banking coral. “Once she nails [egg cryopreservation], I think that we will get an exponential uptake of the methods,” says van Oppen.

But perfecting coral banking is only part of Hagedorn’s overarching plan for preserving reef biodiversity. She and her team have also been freezing the algae that live in coral, for instance, as well as the stem cells of coral reef fishes. “We’re trying to go after the whole reef,” she says. It’s always better to have more in savings.