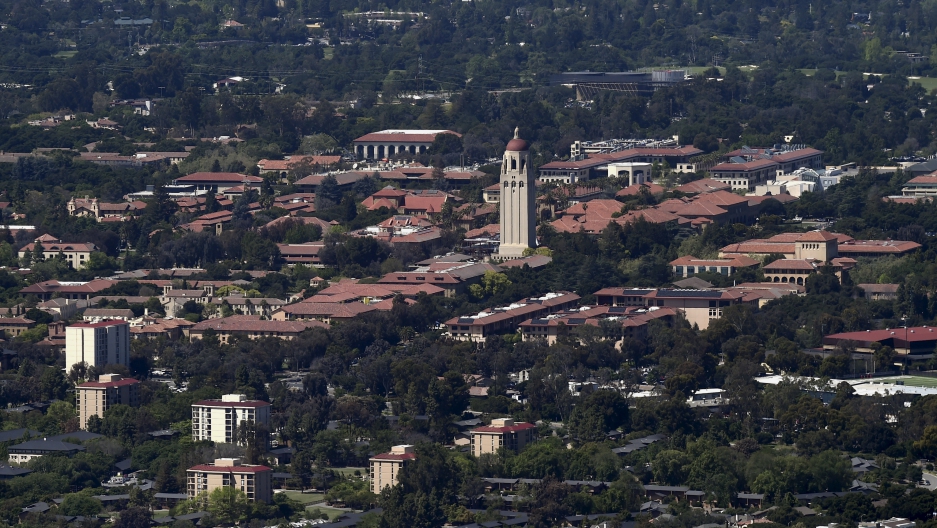 Stanford University's campus is seen in an aerial photo in Stanford, California, United States on April 6, 2016.

He was once a champion swimmer at one of America’s most prestigious universities, but now Brock Allen Turner is known the world over as a convicted rapist.

Back in March, a jury found the 20-year-old guilty on three felony counts for raping an unconscious woman at Stanford University in early 2015. Two fellow students called the police after they saw Turner thrusting on top of the comatosed woman behind a dumpster. The crime he was convicted of carried a maximum sentence of 14 years in prison, and the prosecution asked for six.

But Turner will serve just six months in jail. The light ruling was handed down earlier this week by Judge Aaron Persky of the Santa Clara County Superior Court.

“Obviously, the prison sentence would have a severe impact on him,” Persky said in court. “The defendant is youthful and has no significant record of prior criminal offenses.”

Sofie Karasek is director of education for End Rape on Campus, an advocacy group she helped found in 2013. She is also a survivor of sexual assault herself, and she says she was infuriated — but not surprised — when she heard about Turner’s short sentence, and the comments made by his father.

“I think it speaks to a broader cultural sense that values the lives of men over the lives of women,” she says.

In addition to Turner, Karasek argues hat Stanford University has some culpability in this matter.

“It’s a civil rights issue — the right to be safe on your campus and to be free from a hostile environment, that’s something you’re supposed to have under Title IX, the federal gender equity law,” she says. “That’s what student activists have been really trying to draw attention to over the last couple of years.”

Online, the reaction to Judge Persky's ruling has been fierce. Many people believe Turner’s sentence is too lenient, and as of Tuesday afternoon, more than 330,000 signed a Change.org petition calling for Persky's removal. Many are hoping that someone will challenge the sitting judge in his upcoming election — he is currently running unopposed.

The defendant's father, Dan A. Turner, wrote a letter seeking mercy from the court, saying that the full prison term would be “a steep price to pay for 20 minutes of action.”

The victim also wrote a letter that has since gone viral — it powerfully details her entire ordeal, from the rape through the trial.

“Your damage was concrete; stripped of titles, degrees, enrollment,” she wrote in her address to Turner. “My damage was internal, unseen, I carry it with me. You took away my worth, my privacy, my energy, my time, my safety, my intimacy, my confidence, my own voice, until today.”

When it comes to the sentence, many believe bias played a role — Judge Presky attended the same alma mater as Turner.

“The judge in this case is actually a former captain of the Stanford lacrosse team,” Karasek says. “I think it would be silly to think that didn’t have some sort of impact on how he saw the perpetrator and whether he thought would be a threat to society.”

Though prosecutors argued that Turner is a “continued threat to the community," Judge Persky said that he believes “he will not be a danger to others.”

“That was something that actually really angered me,” says Karasek. “Both because it’s completely crazy to have that type of mentality when we’re trying to get justice for people, but also because I had a similar experience — my perpetrator was basically told, ‘Just don’t do it again.’ That really is invalidating.”

Some are speculating that the defendant’s class and race factored into his sentencing. If Turner was black instead of white, many believe that his sentence would be harsher.

“The demonization of black men in our criminal justice system is very widespread,” says Karasek. “There’s lots of research that shows that people who are black get longer sentences.”

Lynn Hecht Schafran, vice president at Legal Momentum and director for the National Judicial Education Program, has been studying and educating judges on how to approach sexual assault cases for decades. She says there is a tension between judicial discretion and the temptation to install mandatory minimum sentences.

“There is a lot of discretion, but more and more, we have moved to sentencing guidelines across the country because there has been so much difference between what one judge and another gives for the same offense,” says Hecht Schafran. “Usually the statues will say, ‘This crime deserves this level of punishment’ — let’s say between two and six years — and there’s discretion within that framework for the judge to decide what to impose.”

It’s unclear if Judge Persky’s ruling will be taken up as an “illegal sentence,” but Hecht Schafran says that he may be formally censured.

“A few years ago, a judge in California made horrendous remarks in a rape case condemning, basically, the victim for failing to resist in a case where her life was at risk,” says Hecht Schafran. “The California Commission on Judicial Discipline publicly admonished him.”

Though judicial discretion appears to be an issue in this case, Hecht Schafran says that American rape culture also played a role. She teaches a course for judges called “Understanding Sexual Violence,” and has seen the “boys will be boys” attitude that some jurists have toward rape and sexual assault.

“In US law, there is an assumption that one is innocent until proven guilty,” she says. “That works fine in most cases, but in a situation of a sexual assault where the defense is consent … At the beginning of the case, the assumption is that the alleged victim consented. And although, allegedly, let’s say, the fiction is that the defendant is on trial, in point of fact it’s the victim that’s on trial.”

Though she doesn’t believe in undermining defendant rights, Hecht Schafran says the justice system needs to be more equitable, especially when it comes to sexual assault cases.

“People really need to think very carefully about our attitudes towards victims — whether they are men or women,” she says.