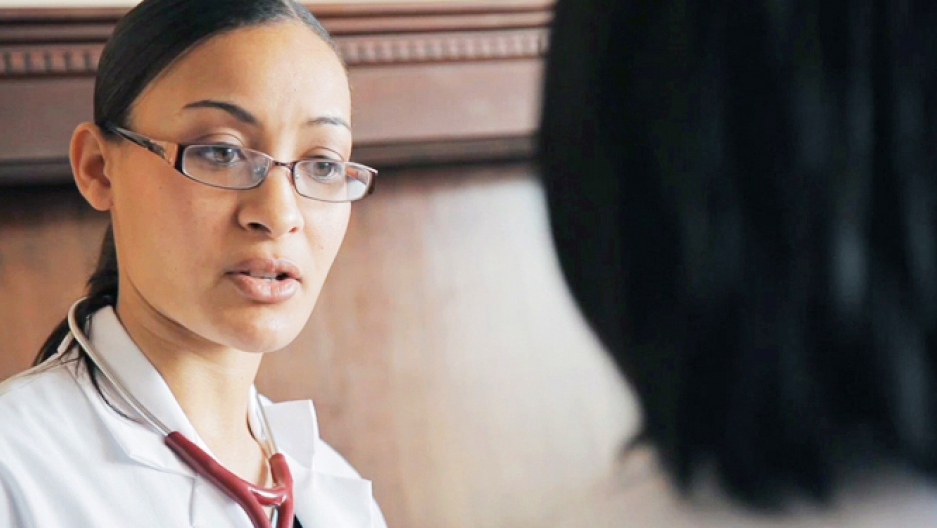 In February 2010, off-duty police officer Joseph C. Coffey was driving by a pond when he noticed a car partially submerged in it. He got out of his car and entered the water. He couldn’t open the front door, so he climbed through the back. There was a woman inside. As Coffey prepared to get her out, he began to sense that this wasn’t an accident.

The woman wasn’t panicking. Instead, she was crying. She started talking about her personal problems.

Coffey had been trained for this. In Warwick, Rhode Island, where he oversees frontline patrol officers, he had developed the department’s crisis intervention team and co-authored a manual on Mental Health First Aid for the National Council for Behavioral Health for use in law enforcement trainings. The Warwick Police Department has taught MHFA at its academy since 2008. So far, more than 11,000 officers have been trained.

That night in the pond, Coffey knew to listen more than he talked. He knew he had to work quickly, to keep the woman from harming herself further. And he knew to remind her that he was there to help her rather than to demand anything of her.

“[Reassuring the victim] is not always the first thing that a police officer may do, coming upon a scene,” he says. “I used my first name. I made her feel that her crisis was real to her … I offered her a blanket when I was able to reach her. [By comforting her], I was able to delay her from her intentions.”

That year, Coffey received an award for preventing a suicide.

One in every four Americans experiences mental illness — a burden that carries heavy social, financial and emotional costs. According to the World Health Organization, depression is the No. 1 cause of disability in the world. “More people are suffering and miss more time from work from depression compared to any other medical problem,” explains Bryan Gibb, Director of Public Education for the National Council for Behavioral Health. Untreated depression, he adds, is also the No. 1 cause of suicide — and at more than 40,000 US suicides a year, “that’s 40,000 people who die from mental illness.”

And when that behavior is misunderstood, police interactions can lead to tragedy. Recent years have seen increased media attention to the problem. In 2014, Ezell Ford, who had been diagnosed with depression, bipolar disorder and schizophrenia, was shot and killed by an officer in Los Angeles. That same year in Albuquerque, New Mexico, James Boyd, a mentally ill homeless man, was shot and killed by police. Such incidents underscore the need for better law enforcement training in recognizing and dealing with mental illness.

“If an officer can recognize what they’re seeing may be a manifestation of mental illness, they can take a more appropriate action — which may not be arrest,” Coffey says.

New York City is partnering with the National Council for Behavioral Health to make such trainings accessible to entire communities. ThriveNYC, a public initiative launched in November 2015 and led by the Department of Health and Mental Hygiene, will provide $850 million in funding for mental health programs over the next four years. A key investment will be providing mental health first aid training to 250,000 people, beginning with first responders like police officers and firefighters.

Because of the pervasiveness of mental illness (insured New Yorkers spend $17 billion a year on treating anxiety, depression, and addiction), proponents of the plan believe first aid for mental illness should be taken as seriously as for physical illnesses and injuries. The goal is to make mental health first aid as ubiquitous as regular first aid, such as CPR. Experienced bystanders can help prevent deaths, assess harmful situations, and seek appropriate medical treatment. The American Heart Association and The Red Cross train more than 20 million Americans each year for CPR. 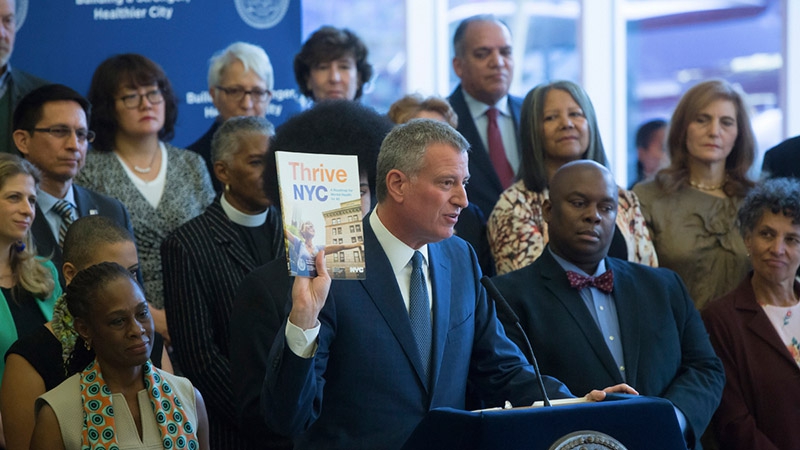 The initiative is being driven largely by the leadership of Chirlane McCray, who is married to New York City Mayor Bill de Blasio. McCray was inspired by her own experiences with mental illness, both within her family and with a high school friend who took her own life. McCray says her parents suffered from depression that affected the whole family, but it was only “talked about in whispers and shadows.” A few years ago, her 18-year-old daughter, Chiara, told her parents she had been diagnosed with anxiety, addiction and depression. McCray remembers not knowing where to turn for support.

“It was hard to figure out who I could trust and know what path to direct her to,” she says. “When Bill became mayor and I became First Lady, I decided this was going to be my focus because there was no question in my mind that [mental illness has] touched every single family in New York City.”

She hopes that the work of ThriveNYC will eventually make getting help for issues like anxiety as commonplace as getting a flu shot.

“So many people are suffering,” she says. “It shouldn’t be something that people are reluctant to talk about or to seek treatment for. Mental health first aid training demystifies mental illness and substance abuse disorders so people know how to respond to someone in crisis.”

Every time Gibb gives a talk about mental health first aid, he asks his audience members if they or someone they love have been impacted by mental illness or substance abuse.

“Everyone raises their hand,” he says.

The National Council of Behavioral Health has trained about 500,000 people nationwide in mental health first aid. In the next five years, the council expects to train 5 million people, continuing to focus on both city employees and community members, including in New York.

In a typical eight-hour class, participants learn key steps for crisis intervention: to assess risk of suicide or harm; to listen non-judgmentally; to give reassurance and information; to encourage appropriate professional help; and to encourage self-help and other support strategies. They also learn about key psychiatric disorders among adults — depression or mood disorders, anxiety disorders, psychosis, and substance use disorders. Sessions can be tailored for the concerns of specific groups like veterans, youth, and the elderly.

In his experience, the best part about teaching MHFA has been exploring what people already know intuitively, but also debunking misconceptions they may hold that contribute to stigma.

Sometimes, people respond to those with mental illness “based on fear and ignorance,” says Gibb, and the training is a way of setting best practices.

Trainees watch videos of two different people approaching a person who’s experiencing psychosis. One person approaches the person in a helpful way, designed to de-escalate the situation. The other approaches in a way that is sarcastic and critical. The two approaches create markedly different reactions. Participants then role-play similar situations to try the techniques themselves.

Response to the trainings has been overwhelmingly positive. Gibb says people leave with communication and intervention skills that are useful even in daily interactions with parents or children.

In his more than 20 years as a firefighter and paramedic, Dr. Richard N. Bradley has seen how the large number of people trained in CPR has created safer communities. The hope is that mental health first aid training can do the same. Bradley, who is a member of the American Red Cross Scientific Advisory Council and a professor of Emergency Medicine at The University of Texas Health Science Center at Houston, says intervention from CPR-trained bystanders increases the likelihood of someone surviving an incident like cardiac arrest — the most common out-of-hospital emergency in the US.

According to the American Heart Association, effective bystander intervention can double or triple a patient’s chance of survival. Of the more than 380,000 cardiac arrests that happen outside of hospitals each year, 32 percent receive care from a bystander.

“We all go through our lives accomplishing a lot of little things, but saving a life is one of the most important things you can do,” Bradley says.

“Churches are very trusted cultural institutions in many, if not all, Black communities,” he says. “Regardless of race, more people in the US are more likely to see a clergy person for an emotional problem compared to a psychiatrist, psychologist, or social worker.”

Hankerson says the African-American community receives lower rates of mental health treatment, largely due to a lack of trust in traditional mental health services. “The issues in the media — from Freddie Gray to Eric Garner to Trayvon Martin—perpetuate mistrust that African Americans have toward institutions that are supposed to protect us,” he says.

Hankerson hopes to address some of these structural issues by connecting mental health workers and faith-based organizations, in collaboration with ThriveNYC. For example, one of the churches he works with, First Corinthians Baptist church in Harlem, uses part of its budget to fund an onsite mental health professional who provides counseling to congregants for free.

“So many folks say, ‘I’m too blessed to be stressed,’ or, ‘If you have enough faith, you shouldn’t have to see a psychiatrist,’ or, ‘If you pray strong enough then you can overcome depression,’ and think having depression may be a sign of weakness,” he says. “The notion that depression is a weakness or indicates a lack of faith in churches have been two issues that we’ve had to address.”

“Now we have psychiatrists and psychologists located in primary care clinics to treat people with depression and anxiety and substance use,” he says. “People are able to come to the primary care doctor and not have the stigma of having to go to a mental health clinic.”

Mental illness is commonly associated with shame, which prevents people from seeking treatment. MHFA interpersonal skills, like sustaining eye contact, listening without judgment, and maintaining open body language, helps break some of this down.

When Gibb considers the cultural evolution he sees taking shape around mental health, he recalls a similar momentum around breast cancer.

“When I was younger, people talked about cancer in hushed tones. There was stigma around cancer. Now we wear pink on Mother’s Day, have breast cancer walks, raise money, and hold up the survivors and those who fight breast cancer as heroes.”

Someday, he says, “we will talk about mental illness the same way we talk about breast cancer.”