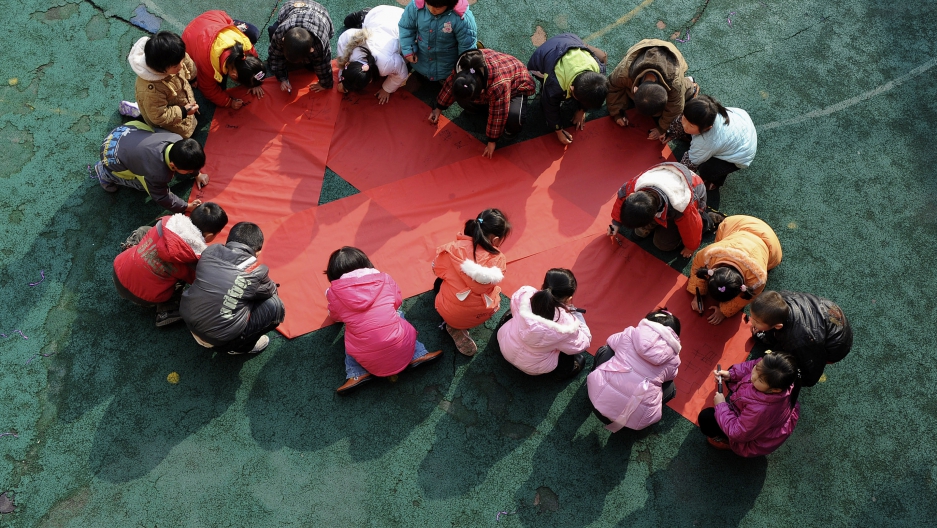 Children sign their names on a red ribbon during an HIV and AIDS awareness rally at a kindergarten in Hefei, Anhui province, Nov. 30, 2009. China's national prevalence of HIV remains among the lowest in the world — but transmission of the virus is soaring among gay men.

When it comes to public health, China’s leaders have done at least one thing very well: They’ve beaten back AIDS.

Indeed, China’s is one of the most impressive turnarounds in the history of HIV and AIDS policy. After facing the threat of an “AIDS typhoon” in the 1990s, China’s adult prevalence of HIV is now less than 0.1 percent, one of the lowest rates on the planet. But this success story is teetering on the edge of defeat, and it all comes down to a growing crisis in the nation’s gay community.

Last November, China Daily noted skyrocketing rates of HIV and AIDS among gay men. In spite of that, Premier Li Keqiang made no mention of the group when he chaired a State Council meeting in April at which AIDS was a main topic.

And that signals a big part of the problem.

“The government's negligence and the societal stigma imposed on the gay community has made the group a more vulnerable target for HIV in China,” Beijing Today observed in March.

As a group, men who have sex with men are experiencing the worst spike in new infections of HIV, the virus that causes AIDS, with male homosexual sex constituting 80 percent of new cases in China. Yet Beijing has never really managed to address the spread of the virus in this population.

HIV first hit China in 1989, the year of the Tiananmen Square massacre. More than a decade later, aggressive policies to combat HIV managed to reverse a looming crisis. By 2011, nationwide prevalence was negligible. Among drug users, HIV infection rates were cut in half from 2003 to 2013, while infection among female prostitutes remained below 1 percent.

It was a tremendous accomplishment in a country of more than a billion people, but there was one thing wrong. HIV rates among men who have sex with men exploded during the same period, rising five-fold.

However, gay men aren’t alone in being slow to adopt condoms, which are still seen as something only women buy as part of their reproductive responsibilities. While the industry is growing rapidly in China, with high use found among female prostitutes, overall sales remain low.

A survey conducted in 2014 showed only 38 percent of sexually active college students, in fact, use condoms. Within that group, gay men are the most affected by HIV. According to a report by the South China Morning Post last November, among students recorded as HIV-positive in the first 10 months of 2015, roughly 82 percent became infected through gay sex. 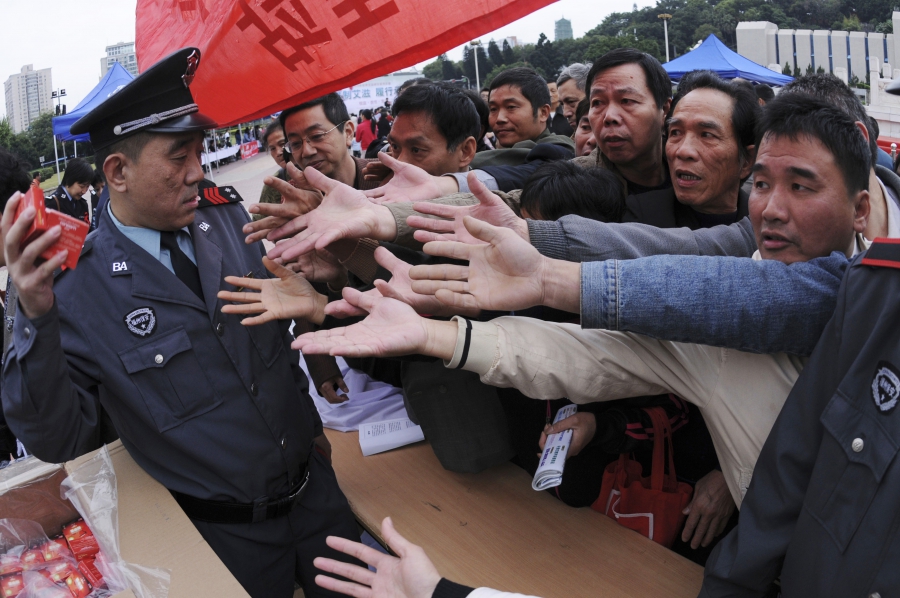 People flock to get free condoms during an HIV and AIDS awareness campaign on World AIDS Day in Fuzhou, Fujian province, Dec. 1, 2010.
Credit:

Efforts like these help. But it appears raising awareness isn’t enough if the stigma surrounding homosexuality is still strong enough to prevent gay men from seeking medical care.

While gay men in China have become more comfortable living openly, they continue to face heavy discrimination. Homosexuality was only legalized in the country in 1997, and being gay was classified as a mental disorder until 2001. Attitudes have changed significantly since then: Shanghai held its first gay pride parade in 2009, and by 2014, Global Times reports, only 2 percent of those surveyed opposed same-sex marriage. But there are still a number of civil rights that are denied to gay men in China.

Encouraging the public to embrace a more compassionate attitude toward gay men and those living with HIV and AIDS is no easy proposition for Beijing. This is, after all, the same government that yanked Fan Popo’s documentary last year about mothers who love their gay children, decided in March that it won't allow depictions of gay men on television, and in April ruled against same-sex marriage.

Continued success in HIV prevention will require humanizing not just the disease, but the people it affects, says Tommy Hung, a former AIDS researcher at the Yunnan Hospital of Infectious Diseases. He thinks the fact that HIV is growing among college students could shift perspectives.

“The shift from being a disease of the uneducated poor or the gluttonously wealthy to a disease of college students and the middle class has humanized it a little,” Hung says. “It creates fear, but it also creates more empathy.”

HIV was first recorded in China with the confirmation of 146 cases in the southwestern province of Yunnan, on the Burmese border, nearly three decades ago. At the time, the country now known as Myanmar was the world’s top heroin supplier — today it’s the second — and Yunnan, one of China’s poorest regions, suffered an epidemic of addiction among the local Dai and Jingpo people. Over the next several years, HIV spread across the rest of Yunnan, and by the early 2000s, it was found in most of China.

But the typhoon never came. The government did, at first, handle the problem in the worst imaginable way, covering up its own failures and limiting speech. In late 2003, The New York Times noted that the village of Xionqiao, like many others in central China’s Henan province, was “experiencing an AIDS epidemic caused by government-induced blood trading in the 1990s.” Three months later, The Guardian reported that charity groups were being barred from Henan, journalists who reported on the epidemic there had been fired, and health officials investigating the crisis had been sued. In Xionqiao itself, HIV-positive villagers were routinely being beaten for trying to raise awareness about the issue.

At the same time, China was reeling from the fallout of the SARS epidemic, which began in November 2002. It wasn’t until April of the following year that Beijing finally stopped denying the problem. But by then, the damage was done: SARS had gone global, with thousands of cases worldwide. The ordeal left China’s economy badly bruised, too — Hong Kong restaurant and retail sales dropped by as much as 50 percent.

By the end of 2003, Beijing officials had learned a valuable lesson that would change how they approached public health emergencies.

“The crisis exposed all the defects in the political system,” said Hu Angang, professor of economics at Tsinghua University’s school of public policy and management. “It turned out to be the best teacher for the government on how not to repeat those mistakes.”

Public awareness campaigns and measures to provide free antiretroviral (ARV) medicine marked a major turning point. By 2011, nationwide prevalence of HIV had plunged to roughly one-twentieth of one percent.

If Beijing doesn’t want to lose these hard-won gains, it’s going to have to foster a culture of safe gay sex. This will mean confronting the stigmas surrounding homosexuality and HIV — or at the very least, not censoring those who do.