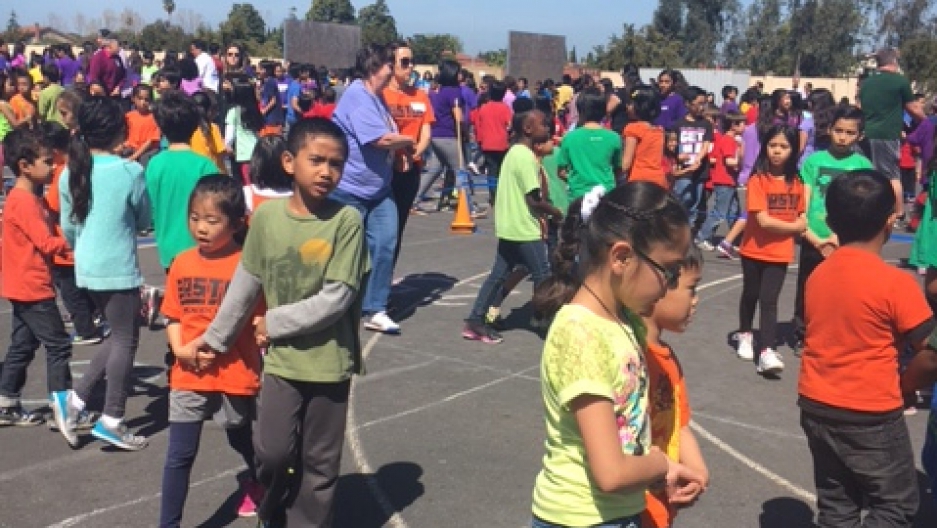 All of Delaine Eastin Elementary School’s 863 students, plus 18 teachers and staff, gathered on a school tarmac on a recent sunny morning, formed into squares of eight dancers each.

Ivan DeSouza, also known as Mr. D, is the music teacher at the school, about 30 miles from San Francisco. He teamed up with the physical education coaches to train the kids to try to break the world record for the largest square dance. DeSouza is the square dance caller and stood above the students on a 15-foot crane in a cowboy hat, calling out instructions through a microphone.

“If your square is not complete, missing people, please stand up so we can see the square that needs people,” he said.

Right now, the largest square dance record is 800 dancers on the floor at once. If these students, after months of practice, complete the full square dance with more people, they will beat the record — by a lot. They will also enter the Guinness Book of World Records.

Parent Kukie Srivastava said she had never heard of square dancing before. She is from India, but is not a minority here. In fact, Eastin’s school population is 60 percent Asian American, with many of the students first generation.

Another parent, Ipshita Mohanty, said it’s a new tradition for her family and she likes the chance to participate in the dance and learn something new.

“I think this square dancing unifies everyone," said Shamsa Rafay, president of the school's Parent Teacher Organization and Pakistani American. “Eight kids in a circle, holding hands, they don’t care who’s by them! We love it!”

The kids seem to love it, too. They practiced hard leading up to this morning, when they expect to break the world record. But it hasn't been easy.

“Everybody was confused to do some things at once,” said Brandon Trieu, a fourth grader.

His classmate, Saanvi Garg had a more festive attitude. “Everybody in my square was fist bumping and happy and patting each other on the back,” she said. “We were all proud and happy.”

So, why square dancing? Principal Carla Victor said it teaches important social skills, like unity and acceptance. Also, in a year of loud national discussions about immigration and anti-immigrant sentiment, Victor said her school sets an example. "When we can come together on a common ground and do something collectively, it just shows what America really is and should be," she says.

And what better to unify folks than good old square dancing?

DeSouza looked onto the squares of hundreds of kids from his crane, fixed his shades and cowboy hat and took the microphone. "Let’s show 'em why we’re here,” he said. “When you hear the bullhorn, that is when we start.”

Student Hannah Calub was nervous but excited. “The fun part about it is when we do join hands, circle left and double grand allemande,” she said.

The bullhorn blows and they were off. Mr DeSouza started calling, “Join hands, circle left! Just go round and round.”

The boys and girls swung their partners, promenading right and left for a good five minutes. Television crews and journalists buzzed about trying to get good shots.

Looking on proudly was Delaine Eastin herself, California’s first female state superintendent of schools. "Our families came here 400 years ago but they came from somewhere else," Eastin said, beaming. "The US is a country of immigrants. This group of children, who represent hundreds of destinations other than the US of America in their ancestry, will be the finest Americans."

The kids repeated the dance, just to be sure they got it right. After it all wound down, DeSouza got down from the riser and prepared to submit the video of the performance to Guinness, and wait for news.