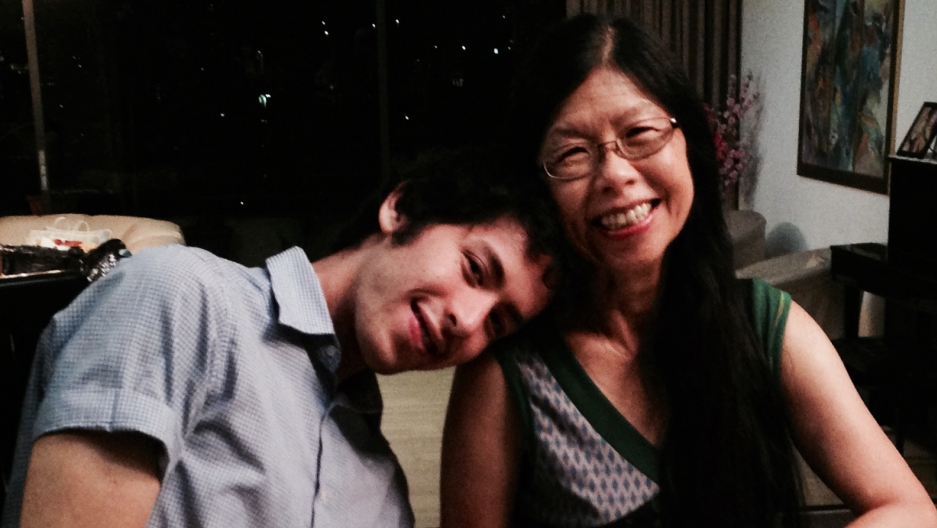 Daniel Gross, left, is pictured with his mother in Singapore.

When I was a kid, I didn’t think of my mom as an immigrant. She helped teach me to speak — which meant it took me years even to realize she has an accent.

So it never really occurred to me that my mother, whose name is Desiree, didn’t participate in the peculiar ritual that is voting in America.

Right now, with California caught up in a flurry of primary-election preparation, the campaign is inescapable. “How can one avoid it? It’s a bit of a circus,” she told me. “It’s like entertainment, like a reality show. Except it’s not a show, it’s the real thing.”

My mom grew up in Singapore, and she studied in England before immigrating to the United States. Today she’s a permanent resident, which means it would be easy enough for her to become a citizen and vote. But she’s never cast a ballot in her life.

“I’ve lived on three continents, so I’ve more or less foregone the opportunity to vote,” she told me.

There are a few reasons for this — starting with a common Singaporean attitude toward voting. “I left my birth country too young to be able to vote, and I grew up in a system that was essentially one party,” she said. “Voting wasn’t a big deal, because you knew who was going to win. It was a benign system.”

But my mom's first encounters with American politics didn't do much to persuade her to vote, either. Decades ago, she came to an odd realization in the cereal aisle of an American supermarket. “I grew up with two choices, corn flakes and rice crispies,” she said. “I know it sounds trivial” — but as a new immigrant, even mundane choices symbolized possibility.

The problem was, she had far more choice as a consumer than she did as a citizen. She couldn't understand why there were dozens of cereal brands and only two political parties. “Neither party represents all my views,” she said.

What's more, she said, American politics seemed skewed by money and marketing. “As the current election shows, the office of the president of America can be bought. If you come from poverty, that position is out of your range.”

Many immigrants see voting as one of the most important steps toward being an American. “It is symbolic of belonging,” my mom told me. But for her, an immigrant who became a US resident by marriage, voting never had that significance. Her work as a doctor, for example, seems much more meaningful.

“The point of voting is to make a difference. But I feel like I make a much bigger difference by what I do every single day. How can I help my neighbor, my friend? What can I teach that will make my students be better health care providers?”

“I know this sounds very stubborn — almost escapist,” she went on. “But the chance to vote is not something that I wake up and look forward to.”

When I cast my own vote this November, I'll have my mom in mind. And I can add skepticism of US politics to the long list of things she taught me.