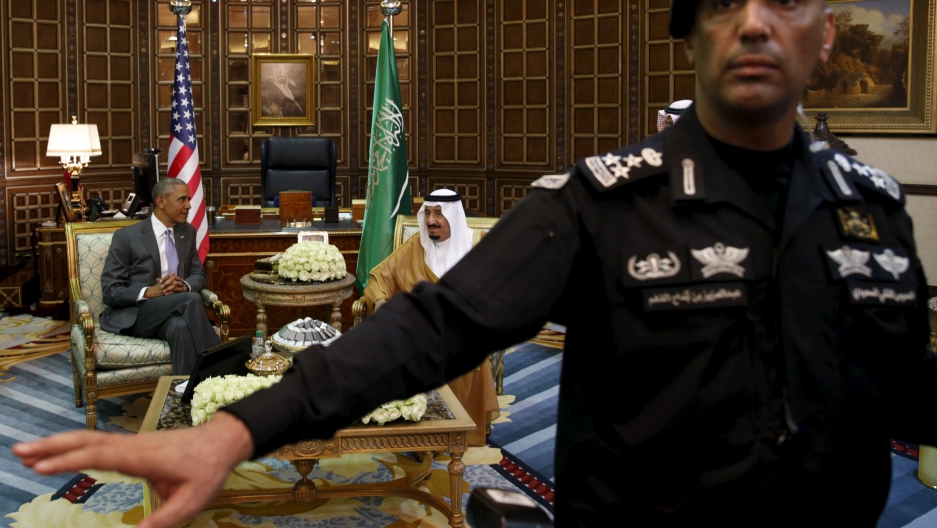 A guard ushers away photographers as President Barack Obama meets with Saudi King Salman in Riyadh, Saudi Arabia on April 20.

Saudi Arabia has bought tens of billions of dollars in US weapons over the past decade. But last month, the White House held one controversial weapon back.

The State Department, which brokers deals between US arms makers and foreign buyers, quietly put a hold on deliveries of a hi-tech cluster bomb, the CBU-105 Sensor Fuzed Weapon. “It’s the first concrete step the United States has taken to demonstrate its unease with the Saudi bombing campaign that human rights activists say has killed and injured hundreds of Yemeni civilians, many of them children,” wrote John Hudson in Foreign Policy.

Hudson believes it was not supposed to be public information. "This all started with the congressional tip that I got from a source of mine, and I was later able to confirm that with the Obama administration," he says. "They cited reports that cluster bombs were being used in civilian areas, which is prohibited by US law."

Yemenis are terrorized by a weapon made in America, sold to the Saudis

The CBU-105, which we examine in depth elsewhere on PRI.org, is a sophisticated air-to-ground weapon. When a fighter jet drops one over a target, the bomb releases 40 guided submunitions, each one capable of finding and destroying an armored truck or a tank. The Saudi-led coalition has used this weapon in its campaign to push back rebels who seized control over much of Yemen.

In the spring of 2015, a couple of months into the war, Yemenis were circulating reports of cluster bombs found in places where there were no military vehicles — civilian areas — and humanitarian organizations were taking note.

The dangers posed to non-combatants are well-established. People continue to be injured by cluster submunitions left behind in conflicts as far back as the Vietnam War.

More than 3,000 people have died so far in the Yemen war, but no deaths have been attributed to the CBU-105. However, that does not mean the bomb is performing as advertised.

"Though we have not documented any deaths," says Belkis Wille of Human Rights Watch, "there have been civilians wounded by the CBUs, and we believe that we have only documented a fragment of the incidents that have taken place in the country, so there could well have been deaths."

"Human Rights Watch ... has investigated at least five attacks in Yemen involving CBU-105s," Hudson wrote in his article. "In December, the group documented an attack on the Yemeni port of Hodaida that injured a woman and two children in their homes ... And two other civilians were wounded in a CBU-105 attack near Al-Amar village, according to local residents and medical staff interviewed by Human Rights Watch."

The CBU-105s were not only injuring civilians. They were failing to meet a reliability standard, set by the United States, that had been a condition for transferring them to Saudi Arabia. Too many of the bombs' unexploded submunitions were being found on the ground in Yemen.

“Under US law and policy, the United States may only transfer cluster munitions that meet our stringent requirements for unexploded ordnance rates, which may not exceed 1 percent,” notes a State Department official. “In addition,” he adds, “recipients of such transfers must commit that munitions will only be used against clearly defined military targets and will not be used where civilians are known to be present or in areas normally inhabited by civilians.”

Saudi Arabia has repeatedly denied using cluster munitions in civilian areas. And so far, it has not responded directly to Hudson's report. "Saudi Arabia hasn't been releasing a bevy of statements about it, but it has said it's going to conduct an investigation into civilian casualties, and the United States touts this as an important aspect of their engagement with Saudi Arabia."

Human rights organizations have praised the White House for holding back a weapon that, though not banned by the United States, is illegal in more than 100 other countries.

“The US putting a pause on transferring horrible cluster bombs to Saudi Arabia is a step in the right direction,” says Paul Kawika Martin of the grassroots organization Peace Action. “The US should permanently stop transferring or using civilian-killing cluster munitions,” he adds, “and sign The Convention on Cluster Munitions.”

Wille of Human Rights Watch adds, "We think this is a very important step, not only for this conflict, but broadly for getting clusters universally banned."

People inside Yemen have discussed the White House move on social media, and agree that it's an important step. But some say they are less concerned with eliminating one kind of bomb than with stopping the war altogether.

Hudson says it is not surprising that the Obama administration would single out the CBU-105. "This was probably the most glaring and maybe the most embarrassing use of weapons," he says. "Cluster bombs are very controversial ... and my guess — and it's a pretty well-informed guess because administration officials specifically cited [the Human Rights Watch and Amnesty] reports — is that it became too much of a diplomatic and political embarrassment for the administration to support and sustain."

"Without cluster bombs, the Saudi coalition is still going to be able to execute this war perfectly fine," Hudson adds. "They have a large arsenal. They have a number of weapons at their disposal."

And just last week, following the White House block on deliveries of Textron's cluster bomb, the Department of Defense awarded another US company, Boeing, a contract to produce over $3.2 billion worth of GPS guidance kits to turn conventional bombs into "smart bombs." A Pentagon source confirms that some of these will be headed for Saudi Arabia.

While preparing this article we contacted representatives of the US Air Force, which expedited the sale of the CBU-105s and Textron Systems, which manufactures them. Neither would comment on how many CBU-105s are affected by the White House hold, who owns any undelivered weapons, or what will become of them.