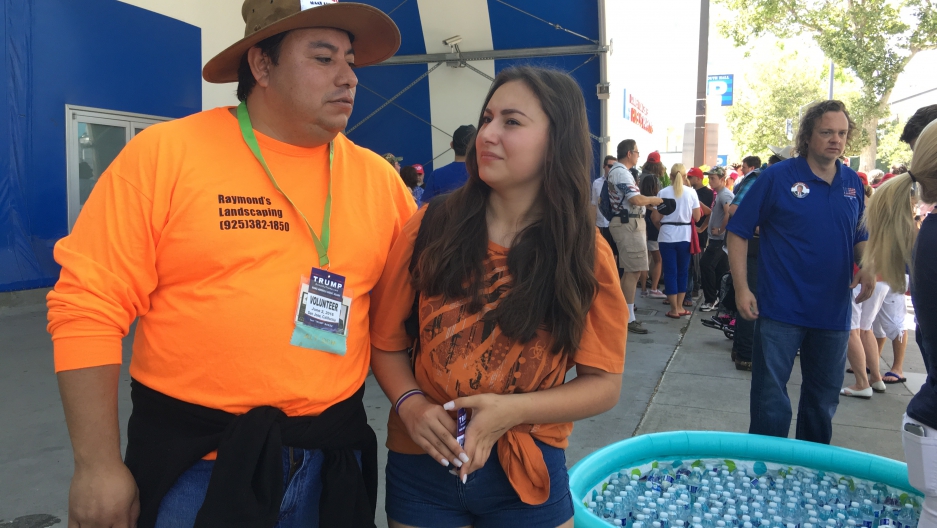 Marco Gutierrez and his daughter, Emilia, 14, attended a Donald Trump rally last week in San Jose, California. They're split on politics — Gutierrez is pro-Trump, his daughter is pro-Bernie Sanders — but they respect their differences. "We didn't really have much to talk about before this," says Emilia.

California's presidential primary vote has sparked sharp debate in the home of Marco Gutierrez and his 14-year-old daughter, Emilia.

You could call theirs a house divided.

And don't get them started about how best to handle the millions of those living without documentation in the US.

"We just have to legalize ourselves," says Marco Gutierrez, who migrated from Mexico in the 1980s and went several years, including time back in Mexico, before gaining legal status in the US. He agrees with Trump, the presumptive Republican presidential nominee, who wants to send millions of unauthorized immigrants back to their country of origin, permitting them to return to the US only after their papers are squared away. "The process of legalization is going to be hard work, but they need to do it," he said at a Trump rally in San Jose on Thursday.

But Emilia, his daughter, calls that reasoning "complete bull."

"[Immigrants] have been here very long. They've already made a life here," she says. "They don't have a life back in Mexico. You really want to send them back?"

"They're already being deported," her father says, adding that the Obama administration has deported immigrants in the US without proper paperwork at record numbers. "Obama has been deporting all of these people; he just hasn't said it like Donald Trump is saying."

His daughter rejected the idea that some people are "illegal."

"The thing is nobody, not one person, is illegal," she says. "If you want to think about it like that, then the whites are illegal. Mexico was here first. They moved to California first. What is up with that? And there's so much racial prejudice against everybody. Donald Trump, I don't see him helping at all with that."

But Emilia says the discussions have brought the family closer.

"We didn't really have much to talk about before," she notes.

Her father agrees, but adds that their conversations are "divisive, very divisive." ­­­

Nguyen Quach, a tech engineer who came to the United States as a young boy from Vietnam, also attended the rally. He wanted to see Trump unfiltered.

"A lot of the news I get is from the media," he says. "It's really hard for me to filter which is right and wrong. So going to the rally and hearing from him directly is another source of information."

He says he'll wait until the presidential debates this fall to choose a candidate. He also says that, however he votes, he will not be ashamed or secretive about his decision. In Vietnam, he says, "You can't say anything you want. It's one party, and if you say something that that party doesn't like, you're going to get arrested." 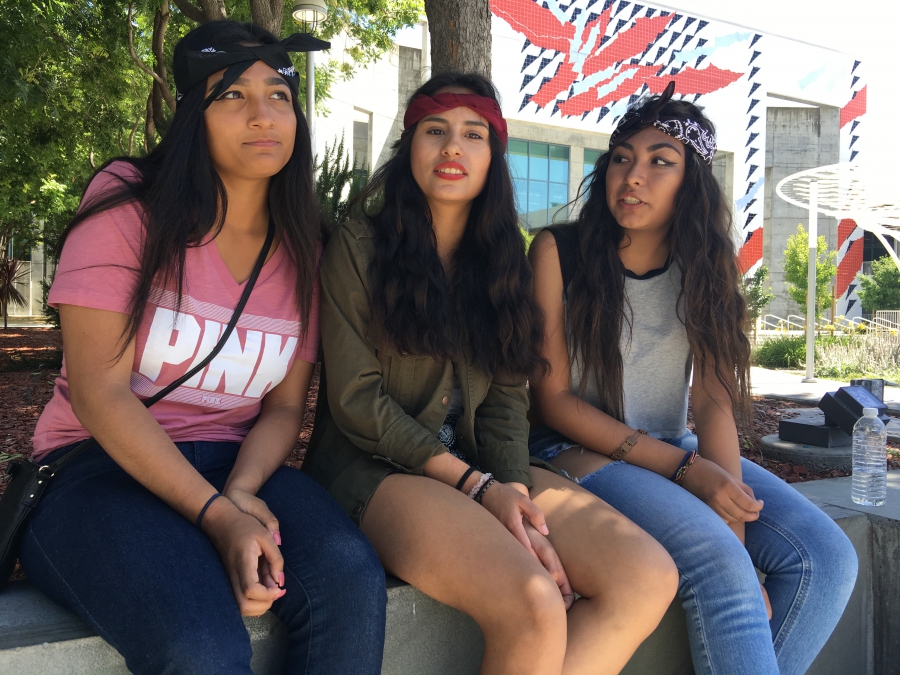 "My parents haven’t voted previously because I just think they don’t think it affects them. But I think now I’m going to convince him to vote," says Lily Guerrero, 16, right, who protested at a recent Donald Trump rally in downtown San Jose, California. She went with her two high school classmates, Natalie Hernandez, 17, far left, and Mariam Espinosa, 16, center.

"My parents, they haven't voted previously because I just think they don't think it affects them. But I think now I'm going to convince them to vote," says Lily Guerrero. Her two friends nodded along, hopeful that they will convince their parents to vote in November.

Guerrero also rejected Trump's characterization of Mexican immigrants as "rapists" and "killers." She says her parents are hard-working.

"Every job that I've seen a Latino person do has been hard work," she says. "My mom works at a restaurant seven days a week, and I just don't see how anyone can ever say that she's lazy or doesn't work hard for the things she has."

The teens also said that while walking to the Trump rally, a small group of people wearing pro-Trump T-shirts called them "gang members" because they wore bandanas in their hair. That suprised them, especially given San Jose's diversity.

"I think it's because we're brown, and we're Hispanic," says Natalie Hernandez, sitting with Guerrero. She says that if she were white and wearing a bandana, it would simply be seen as a fashion statement.

Away from the rallies, many immigrants and others from immigrant families are watching the presidential race closely. That includes Mukul Agarwal, an entrepreneur from India who co-founded BootUp, a large co-working space in Silicon Valley for tech start-ups. He remains undecided, but says he will vote for a candidate who is pro-entrepreneur and advocates for visas, a source of stress for many high-skilled workers in California who want to create new businesses, but feel hamstrung by their inability to secure legal status in the US.

"Every company, from all over the world, they're coming to the Valley because they want to grow, and this is the landing spot," Agarwal says. "So we want people who can create good policies that are good for companies. It's a really big deal for all of us because we are not just about Silicon Valley. We're dealing with the entire world."