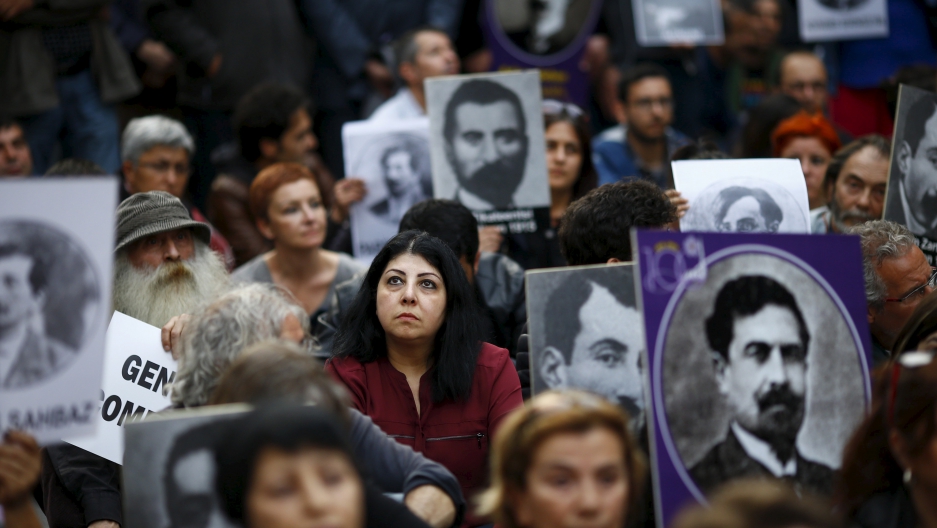 Activists hold portraits of victims during a silent demonstration on April 24 to commemorate the mass killings of Armenians by Ottoman Turks in Istanbul, Turkey.
Credit:

Germany's parliament was practically unanimous: The killings of over 1.5 million Armenians by Ottoman Turks in 1915 constituted genocide.

The German Bundestag's overwhelming vote last week in favor of this resolution, with just one vote against and one abstention, brought both gratitude and anger. Armenian communities, many of them descendants of genocide survivors who are dispersed across the world, are grateful. Turkey, however, was incensed and recalled its ambassador to Germany. Many Turks see the vote as not just a threat to longstanding German-Turkish relations, but to Turkish national identity.

These opposing emotional reactions over the "g-word" and its politics are nothing new. Turkey and its government have long denied the genocide took place, calling the use of the term a gross distortion of the truth. Instead they've chosen to interpret the killings as a consequence of war, and not a systematic attempt to wipe out most of the Armenian population of the Ottoman Empire. Turkey's most conciliatory step has come in the form of condolences offered in 2014 to descendants of genocide survivors by Recep Tayyip Erdogan, who was then prime minister (he is now Turkey's president).

Germany joins a growing list of countries — including Argentina, Canada, France and Russia — that recognize the Armenian genocide as such. The European Union's biggest nation broke away from holdouts like the United States that use different terminology, without the g-word. Germany's move adds pressure on Turkey and its policies of denial. It’s a monumental decision made all the more significant by the often unknown role Germany played in the mass extermination of Armenians, 30 years before the Holocaust.

An ally of the Ottomans, Germany had military officials across the empire who bore witness to the deportation and killings of the Armenian population, along with Assyrian and Greek minorities. Their role had both direct and indirect implications as many stayed silent, fought alongside Ottomans or provided weapons for the crimes that took place. Some sources also say the German role in the Armenian genocide became a model for the Holocaust.

But perhaps more revolutionary than the decision itself was the person who championed it: the co-leader of Germany’s Green Party, Cem Özdemir.

Considering his Turkish background, Özdemir’s pioneering involvement is noteworthy — an important, rare voice in Armenian-Turkish reconciliation. Many, including Armenians, praised what they saw as Özdemir’s moral courage in standing up to denial, even as he received threats and was called a traitor by Turkish politicians.

His support, and that of a small but strong group of Turkish activists, offers the Armenians some hope that Turks will one day do the same. For that to happen, a fundamental change has to come from within Turkey, from both officials and ordinary citizens challenging their past and the residue it has left behind.

The stakes seem high for Turkey, with its deepening descent into authoritarianism and nationalism, eroding press freedom, and long, fraught relationship with another minority group, the Kurds. To move forward as a democracy Turkey needs to revisit the blind spot in its history that became the crux through which its other problems are intrinsically connected, the event on which a modern Turkey grew: the Armenian genocide.

Armenians and Turks share a burden, one that changed the fate of millions in such explicit ways. More than 100 years on, Armenians have never forgotten this part of their history. But now more than ever, it is the Turks who must do the remembering.

Liana Aghajanian is an Armenian American journalist who edits Ianyan Magazine, an independent online publication about Armenia and its international diaspora. She tweets here: @LianaAgh.