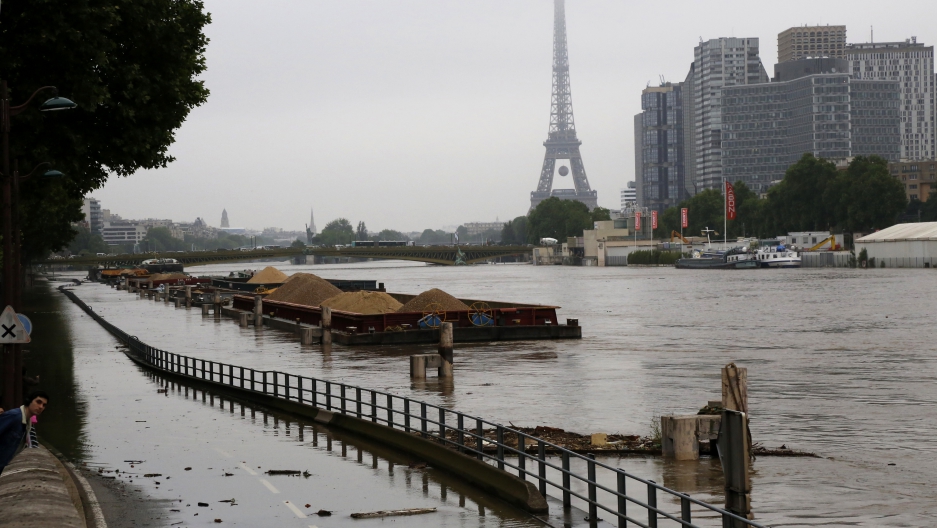 Barges are moored together near the Eiffel Tower as high waters cover the banks of the Seine River in Paris, France, after days of almost non-stop rain caused flooding in the country, June 2, 2016.

Here in Auxerre, it's been raining non-stop for days, and the weather has been nothing if not extreme. You go to sleep with torrential rain, and you wake up with its sound, knowing it hasn’t stopped all night. It’s kind of doomsday-like. Meteorologists say in 150 years of recorded history, nothing has come close to this level of precipitation.

In the past month here, a couple of hail storms — some of the hail golf-ball sized — destroyed crops and budding grapes in vineyards. Around the villages of Irancy and of Chablis, one of the most celebrated wine-producing village in France, some wine-makers say they simply won’t be able to produce wine at all in 2016. The last hail storm was so brutal that roads were blanketed with icy pellets, and villagers say whatever accumulated in the ditches didn’t melt for a couple of days.

Many roads are closed, one major highway is shut down, the flooded town of Nemours, south of Paris, was evacuated. West of Burgundy, in the Loire Valley, the château of Chambord is now sitting on a temporary lake that formed when one month’s worth of rain fell down in three days.

In Paris, the banks of the river Seine are submerged, reaching 20 feet above normal, a commuter train line is closed and the Louvre Museum is shutting down to allow workers to move stored artworks out of its basements. On Friday, the Louvre and the Orsay said they were moving more artworks, including the Mona Lisa.

We may not be reaching critical levels of the great flood of 1910 yet, but it’s still raining now, and it’s going to rain for at least another day.

This is happening on a background of national strikes that have been impairing the country for weeks.

There’s been serious arm wrestling between the government and labor unions, mostly the CGT, one of the largest unions in France and possibly the most prone to protest too. It has to do with the labor reform law that would give employers more leeway with their staff, when it comes to hire and fire employees, extend working hours, or even reduce pay. That is completely unacceptable to the CGT. In spite of changes to the law since the protests began, there have been demonstrations across France, some of them fiery and violent.

So transportation has been spotty, the national railway network SNCF is on its third day of strike this week; it was also on strike last week. I looked online Thursday to see if I could find a train to Paris, but the SNCF website responded dryly: “we are unable to obtain any results for your search.” So I could no longer escape this small, rainy town.

There have also been strikes in the energy industry, at nuclear plants and in oil refineries, which sparked fears of gas shortage. Last week, the threat of a nation-wide gasoline shortage sent drivers racing to gas stations in a panic, causing long lines.

I contributed to the mayhem by getting in line myself, at one of the few stations that remained open. It gave me a chance to talk to customers about how they were coping with ongoing strikes. Some people said workers are right to protest this labor reform law. In fact 70 percent of French people are against this reform, though they don’t all support the strike — far from it.

Some of the people I talked to said they felt they were being taken “hostage” by unions and that striking is not an effective means of putting pressure on the government because it only affects workers who are having a hard time getting to and from work. So the frustration and exasperation is palpable.

Strikes are part of the cultural landscape here. It is perfectly acceptable to voice your discontent — loudly. Part of the so-called “joie de vivre” is also the freedom to complain, and many people use this freedom abundantly. Since March 31, we have seen the occupation of place de la République — a large square in central Paris — by a youth group protesting just about everything, including the work law reform.

French society makes it easy to mobilize and organize massive protests, and its protest culture relies on the fact that the government is likely to make concessions. In fact, in light of all the current strikes, the government may be doing just that. The head of the CGT union, Philippe Martinez, said Prime Minister Manuel Valls called him over the weekend, which would signal that the government is open to negotiation and discussion.

One big concern now is the start of the Euro 2016 soccer championship next week. This is a potentially disastrous and embarrassing situation for France. Imagine transportation strikes during this month-long tournament.  Martinez said the union does not want to prevent anyone from attending soccer games. But some 2.5 million soccer fans are expected in stadiums, 7 million in fan zones across the country; one of those zones is set at the foot of the Eiffel tower.

The French government has been under pressure to put great safety and security measures in place for this event in the aftermath of the November attacks. It says security measures for the soccer tournament are unprecedented: 10,000 security guards were hired, there will be video-surveillance, bag searches, bomb squads on stand-by, and so on. But this week, the US State Department added to the pressure, issuing a travel alert for Europe, stating that stadiums and fan zones create "potential targets for terrorists."

One more thing: Since the attacks, tourism has been down in France and Paris especially, so businesses are concerned strikes may cause cancelations or major frustrations among visitors who could get stuck on their way to the games.

It’s hard to tell if the government and unions will find an acceptable compromise before the beginning of Euro 2016.

But at least the weatherman says it’s going to stop raining.