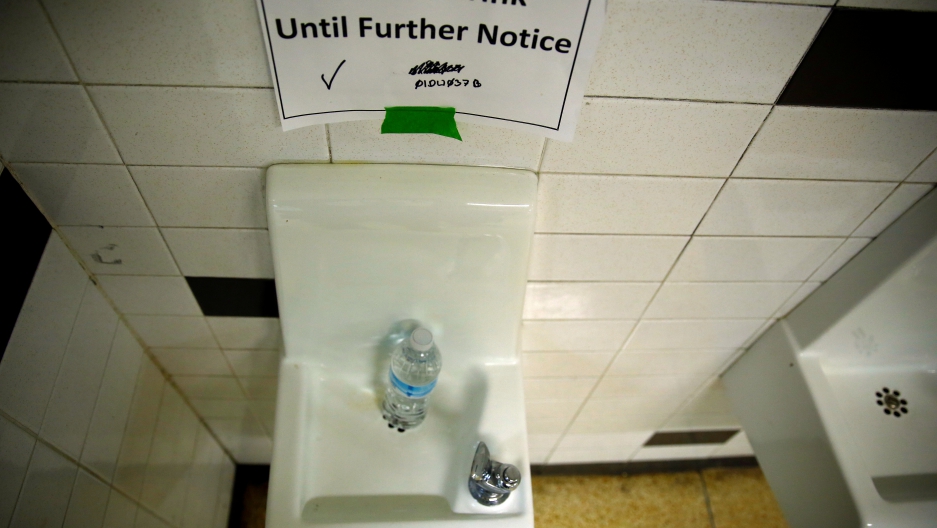 A sign is seen next to a water dispenser at a high school in Flint, a city struggling with the effects of lead-poisoned drinking water, in Michigan May 4, 2016.

For more than two years, the residents of Flint, Michigan, complained about the taste and smell of their tap water, of skin rashes, and hair loss with little response from officials. Now, much of the world knows of the lead-tainted water that coursed through Flint's pipes, and of the thousands of community members who have elevated levels of lead in their blood.

As the city and state continues to replace the pipes, officials and scientists are now saying that residents can drink the water if it's filtered, and that people can begin washing their hands and showering with unfiltered water.

But some residents say the chemicals the government is using to treat the water are creating new issues. Melissa Mays, a Flint resident and founder of Water You Fighting For, says she has experienced this firsthand.

“I [showered] yesterday and I’m sorry that I did,” she says. “It’s just hard to breathe, my hair color has changed, it burns your nose, your throat, your eyes. We received a shower filter from the plumbers, and it helps a little bit. But it’s still way different.”

And Mays is not alone. LuLu Brezzell is a Flint native and mother of Amariayanna "Mari" Copeny, an 8-year-old elementary school student who is known as "Little Miss Flint." Mari wrote a letter to President Barack Obama in March, which helped spur his visit to the city. Brezzell has been heating bottled water so her three young children can take baths. She says she’ll never trust the government again.

“We need our entire infrastructure fixed, and until that’s done, nothing’s going to fix the water,” Brezzell says. “Here in our home, our water is tinted blue, and it smells like bleach most days. If you’re exposed to it for more than a couple minutes you tend to start getting a headache. We have rashes that resemble chemical burns if we’re in the water for more than a couple minutes. We have to do dishes with gloves on because it messes up your hands and arms. It’s not good at all.”

According to Brezzell, officials have said that adolescents, teens and adults are allowed to shower or bathe in the water without a filter, if their immune system isn’t compromised in some way. But Mays says the water is still not safe.

“We’ve had [actor] Mark Ruffalo’s group, Water Defense, in, testing homes, and we’ve been finding across the board high phosphoric in the water, which is what they’re putting in,” Mays says. “They’re putting in phosphoric acid to try to recoat the pipes, but it’s not working — you can’t recoat holes. So instead, all the chlorine and all of the additional chemicals they’re adding are causing all these byproducts to make our bathrooms like gas chambers.”

Even though many Flint residents have begun showering for five minutes or less with lukewarm water, Mays says people are suffering.

“You just feel awful when you take a shower,” she says. “My kids have lost so much hair. It’s ridiculous for them to say it’s safe when the state themselves are not testing it with hot water. So I’m asking, ‘How can you say it’s safe to shower when you’re not even testing the hot water? You cannot say that something’s safe if you have not tested it,’ and they just don’t listen to us.”

Brezzell says she doesn’t believe the city or state can fix this issue alone.

“The only way that I think that our entire infrastructure will get fixed in a reasonable amount of time is if they bring in the Army Corps of Engineers, move everybody out, and get everything done at once,” she says.

Some wonder why people like Mays and Brezzell don’t just leave Flint. Though she rents her home, Brezzell says that, as a lifelong resident of Flint, she’s invested time and money into the city, adding that she won’t let the water run her out of town. For Mays, things are a little more difficult.

“We own our home, and at this point in time I don’t think that anyone’s going to come in and purchase my poison water house,” she says. “I’ll never get what I owe out of the house. Everybody said, ‘Just give it up; file bankruptcy.’ Well, my son’s hopefully going to college in the next year or so and I wouldn’t be able to co-sign for his student loans or help him out in any shape or form. We would lose everything. So here we sit, but here we fight.”