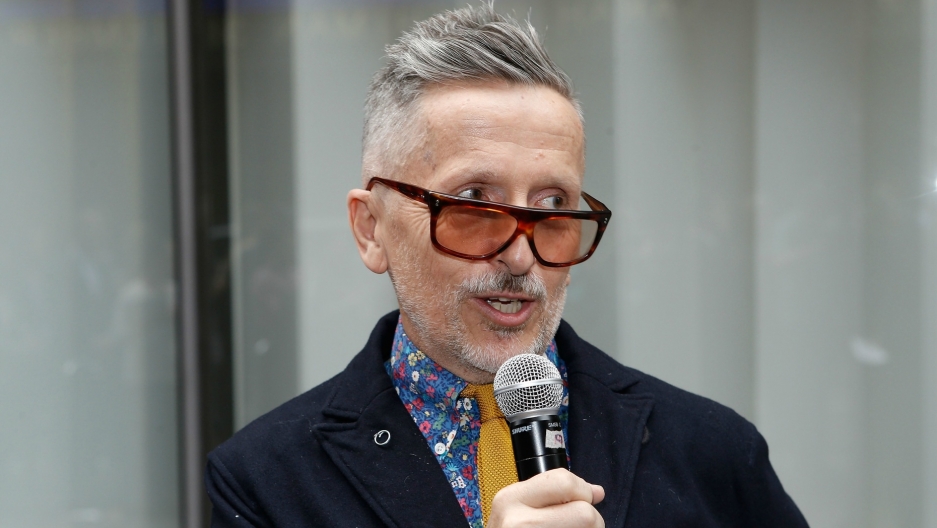 Simon Doonanstarted out designing window displays atBarneys, a posh department store for the fashion-forward. Now, he's the chain's creative ambassador-at-large. In his fourth book,"Eccentric Glamour," Doonan argues that oddballs have more fun. During a visit to one of the company's Manhattan stores, Doonan takes Kurt on a spin through menswear to try on some new, more adventurous looks.

Kurt Andersen: Can we look around the store a little bit and see if there's any stuff that might be "eccentrically glamorous" that I might find?

Simon Doonan: Well we have seven floors of menswear here, so I can't believe there isn't going to be something which meets that criteria.

This is a jacket which is made of ---

It's leather which has been perforated and woven into this stretchy, very interesting configuration. And there's an enormous amount of handwork in a garment like this.

Are you trying to shock me by showing me this price tag?

The price tag for this white leather blouson is $5,650. You're getting something rather exquisite. But not for you! If you showed up in this, I think people would say "Kurt's gone nelly," Kurt's gone mad," "What's happened to Kurt."

Have you always considered yourself an eccentric?

I think so, yes. And it's a function of growing up in a house full of eccentrics, you know. I grew up with mentally ill relatives and very self-invented parents. My mother was extremely glamorous in a sort of post-war kind of way. Every day was a fashion opportunity for her. So she used to spend a lot of time getting ready in the morning. You know, the French manicure, the upswept Lana Turner-slash-Betty Davis hair. And on this one occasion we were going to visit our relatives who lived outside of Belfast, and she took a long time getting ready and I remember thinking, "Oh my god, she's really going to wow us all today."

But the person who emerged from her bedroom was basically unrecognizable, because she had de-glamorized herself. And my sister and I were sort of very disturbed by this because we'd never actually seen her fingernails before, 'cause they'd always had this vermillion nail polish. And, you know, when I look back on that incident, and I think of her sitting by the fireside in this little cottage in the Mourne Mountains. And there's my mother, dying for a cigarette, looking completely unrecognizable, and I think they would have really loved to see the real Betty. Not this muted, styled-down version of herself.

On the other hand, it shows --- to me --- a kindness on her part, to try and go on the down-low so as not to freak out the peasants.

I think it came from a very considerate place. She was thinking, you know, "I don't want to rattle their cage. They already think I'm fast 'cause I moved to the big city." But at the end of the day, everyone loves a trip to the circus. Everybody loves a feather boa, or a tiara, or a bit of extra glamor, and if everybody gets more dressed up, the world is a more optimistic, exuberant place.