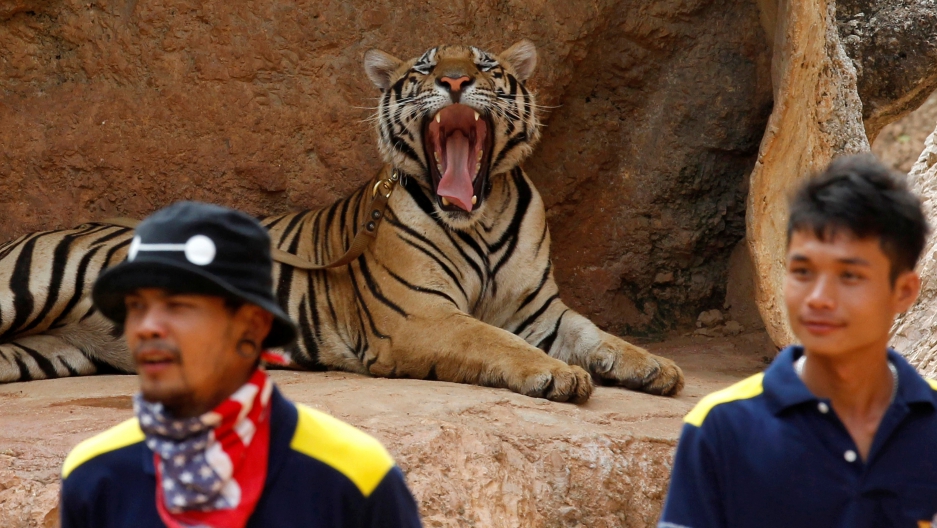 A tiger yawns before officials start moving them from Thailand's controversial Tiger Temple, a popular tourist destination run by Buddhist monks. It has come under fire in recent years over the welfare of its big cats in Kanchanaburi province, west of Bangkok.
Credit: Chaiwat Subprasom/Reuters
Share

What could be more enticing to a visitor to Thailand: A tiger sanctuary run by Buddhist monks a few hours from the hustle and bustle of Bangkok.

But now the operators of the infamous Wat Pha Luang Ta Bua temple, known as the Tiger Temple and long suspected of wildlife trafficking and animal abuse, are facing justice.

"International and local NGOs have been calling out this Tiger Temple for citations of animal abuse, of illegal trafficking, illegal selling for years," says Adam Ramsey, a reporter based in Bangkok. "So it's actually more of a question of, why did it take so long?" 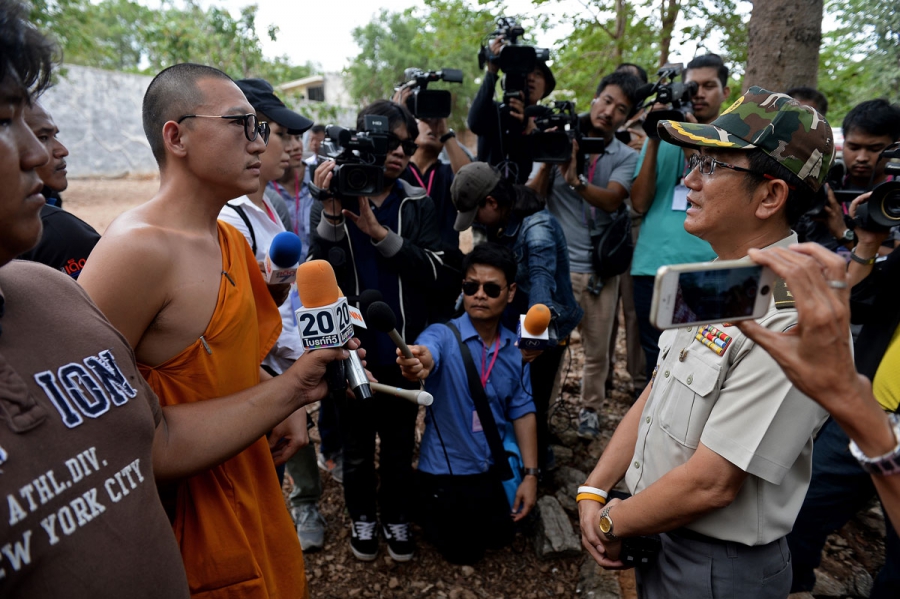 The temple has been a favorite tourist stop in Thailand, charging admission for visitors to take photos and cuddle with the animals.

On May 30 Thai officials and staff from the Wildlife Friends Foundation Thailand and other NGOs arrived at the temple to start removing its collection of adult tigers, thought to number 137. The monks refused them entry. The next day the group returned with a court order that allowed them to force their way in. Ramsey was there for the raid. "They had their tranquilizer guns. They knew where and which tigers they were going to try and get, which would be the easiest to place into the cages, sedate and relocate." 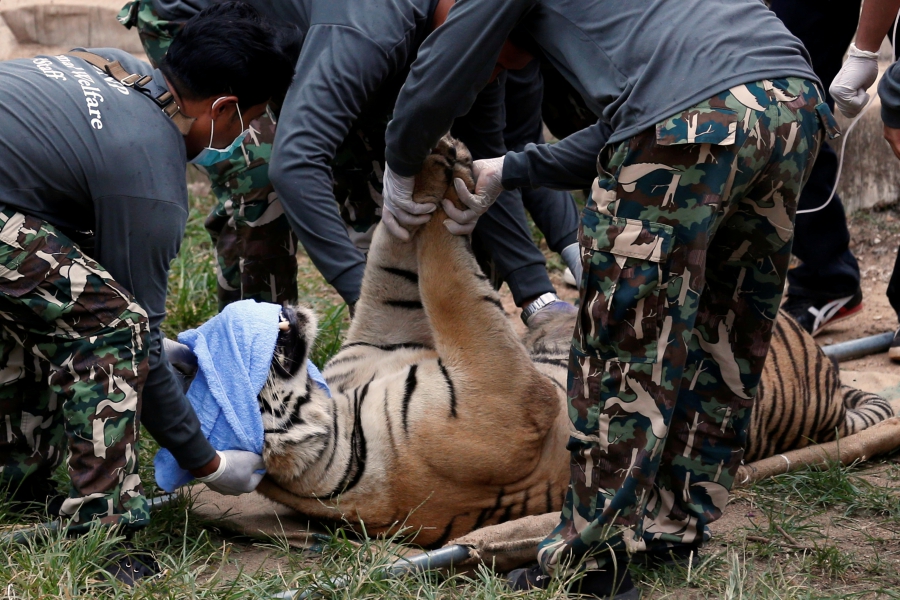 A sedated tiger is stretchered as officials start moving tigers from Thailand's controversial Tiger Temple, a popular tourist destination which has come under fire in recent years over the welfare of its big cats in Kanchanaburi province, west of Bangkok, Thailand.

There was confusion in the early hours of the raid, however, which Ramsey said was supposed to start at 9 a.m. but didn't begin in earnest until five hours later. During the delay, visitors continued to show up for photo ops with the big cats. "Tourists were still coming in and seeing the tigers, sitting down and taking selfies so that didn't help with the confusion," he says. By the end of that first day, Thai officials managed to get the system up and running so they could safely and easily tranquilize the tigers, place them in cages and then drive them to a research center where they'll be held.

Thai wildlife officials set aside a week to transport the live adult tigers to a new location. On the second day they came upon a disturbing discovery: 40 tiger cub corpses and numerous body parts from other animals preserved in a freezer. 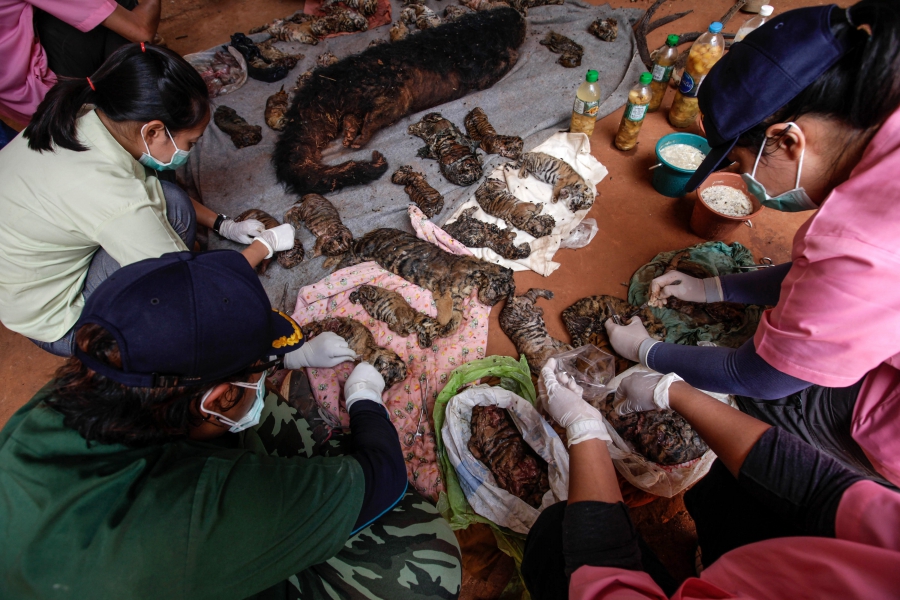 When Ramsey inquired, the mostly volunteer local and international staff at the temple said the frozen baby tigers were a result of a 2010 policy change.

"The veterinarian in charge used to cremate any tiger cubs that died because a lot of tiger cubs die, even in captivity. I think it's about one in three," says Ramsey. "But when the Tiger Temple started being accused of trafficking in tiger cubs the veterinarian changed the policy. They now freeze them, in part to prove that they're not selling tiger cubs on the black market. So it was meant to act as proof that, no, these tigers died naturally and we still have their bodies just in case you thought that we sold them off."

But three days into the operation, that explanation seemed to fall apart. On Thursday, Thai police stopped a truck as it was leaving the Tiger Temple. Inside they found two complete tiger skins, about 700 amulets made from tiger parts and 10 tiger teeth. The two men in the truck were arrested and charged with possession of illegal wildlife. A monk was also detained.

Animal rights activists, environmentalists and wildlife conservationists have long criticized the temple for not properly caring for the animals, and accused them of trafficking in tigers and tiger parts. An adult tiger skin can fetch anywhere from $6,000 to $10,000.

Ramsey does not believe the mostly volunteer staff at the temple are involved with the animal abuse and trafficking. He believes those actually caring for the animals are devoted to them and that the illegal activity is going on behind the scenes.  The truth is that on the ground the monks have very little if anything to do with the tigers day to day. That falls to a number of local and foreign volunteers and staff. These are people who are really out of the loop in terms of what is happening, who's making decisions."

The Tiger Temple's origin story is a bit murky. Buddhist monks founded it in 1994 as a forest sanctuary in Kanchanaburi Province a few hours west of Bangkok. The story goes that villagers brought the monks seven or eight tiger cubs in 2001. "They gave them to the monks because they felt the monks could look after them at least in the short term," says Ramsey. "Thailand's DNP [Department of National Parks, Wildlife and Plant Conservation] knew this was happening and allowed them to hold onto them for a bit."

The tigers stuck around, and multiplied, mostly through a captive breeding program, which the temple was eventually forced to stop. By the beginning of 2016, there were nearly 150 tigers. "Tiger cubs used to be the main attraction. It's what the tourists really want to see. They want to hold a tiger and feed a tiger cub," Ramsey says. 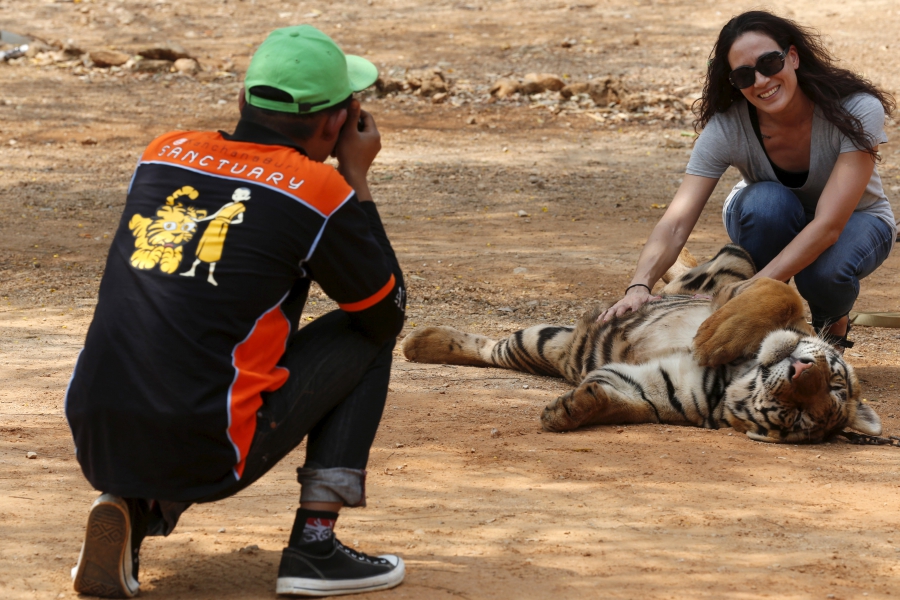 A tourist poses for picture at the Tiger Temple in Kanchanaburi province, west of Bangkok, Thailand, February 25, 2016.  The Tiger Temple is now closed after Thai wildlife officials raided it on May 30th and removed the remaining tigers in residence. The operators of the temple are charged with wildlife trafficking and animal abuse.