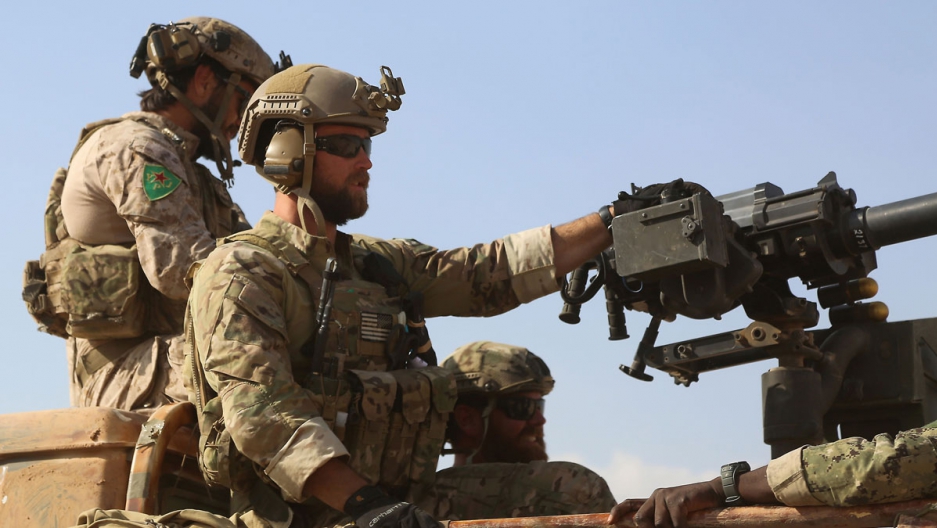 Armed men in uniform identified by Syrian Democratic forces as US Special Operations Forces ride in the back of a pickup in Fatisah in northern Syria on May 25.

When does a military adviser cease to be an adviser, and become a combatant? Does fighting on the front line constitute advice, or something entirely different?

These are the questions being asked of the United States after new pictures showed US special forces troops traveling with Kurdish forces on the front line against the Islamic State in Syria.

For some, it’s an issue of semantics. When Barack Obama announced in April that he would send some 250 special forces troops to Syria to support anti-ISIS fighters, State Department spokesman John Kirby explained the distinction to bemused reporters thusly:

“When we talk about boots on the ground ... we are talking about conventional, large-scale ground troops that are designed to actually engage in, plan, coordinate, integrate and engage in combat operations on the ground as units," Kirby said. “We're not doing that. We've never done that in Iraq or in Syria, and we're not going to do it now.”

US officials insist the country's special forces are present in Syria and Iraq to “advise and assist.” That description encompasses activities like training local forces to take on ISIS, offering advice on specific operations and assisting in the process of calling in airstrikes from the US-led coalition against the militant group's positions.

Responding specifically to the images of US special forces near the front line in Syria last week, the Pentagon again denied US troops were fighting on the front line.

"Our forces in Iraq and Syria, their instructions, their mission, is clear that they are not at that leading edge," said Pentagon press secretary Peter Cook. "They're able to defend themselves, but they have to be in a position to be able to provide the kind of advice and assistance needed to help these forces, these local forces, succeed."

But these explanations make less sense when considering the numerous reports of US special forces integrating and engaging in combat operations in Syria and Iraq.

Take the example of last week. Delil Souleiman, the photographer who took the pictures of the US soldiers in the village of Fatisah — 30 miles from the de-facto ISIS capital of Raqqa, and just over 1 mile from the current front line — recalled the following description of their activities:

“On the way, we pass another group of US soldiers who are hauling an anti-tank system to the top of a building. ‘The Americans shoot surface to surface missiles from the top of this building on the explosives-rigged cars’ that the IS often uses to attack the SDF forces, tells us Hawkar Kobane, an SDF [Kurdish-led Syrian Democratic Forces] commander.”

It is a familiar story elsewhere. In Iraq, Kurdish peshmerga fighters, another US ally in the fight against ISIS, recounted to the Guardian a number of instances when special forces troops were engaged in offensive operations.

“On 20 April US forces played a role in an operation to retake Dawus al Aloka village south-west of Kirkuk, in which they fired about 47 mortars at Isis positions; They were also involved in two attempts to retake the villages of Wastana and Saddam settlement southwest of Kirkuk on 11 June and 26 August; On 11 September special forces troops participated in the successful operation to retake Wastana,” the Guardian reported.

The same article spoke of US snipers deployed near Kirkuk, in northern Iraq.

“A senior peshmerga commander, who did not wish to be named, said: ‘In February, for the first time, four American snipers came to south Kirkuk because we had lost several peshmerga to the Isis snipers.’

The same was true last year. Peshmerga commanders have spoken freely about the presence of US forces on the front line.

"Since the first days [of the Islamic State offensive], the Americans have been with us," Jamal Mohamad Omar, a peshmerga commander operating in the Sinjar region close to the Syrian border, told GlobalPost in April 2015. "There are teams in the front lines, and we have a common operation room. We coordinate about the position of the enemy and strike the enemy. So we have a very good relationship."

The US has lost two soldiers in the fight against ISIS. Master Sgt. Joshua Wheeler, 39, was killed during a raid to free ISIS hostages in October 2015. Navy Seal Charlie Keating IV, 31, was part of a rapid response team sent to rescue US military advisers who came under attack during an attempt by ISIS to take the town of Telskof in northern Iraq.

With preparations being made with US allies on the ground in Syria and Iraq to attack the two major cities under ISIS control — Raqqa, Syria and Mosul, Iraq — it is likely that the involvement of US forces will only increase.