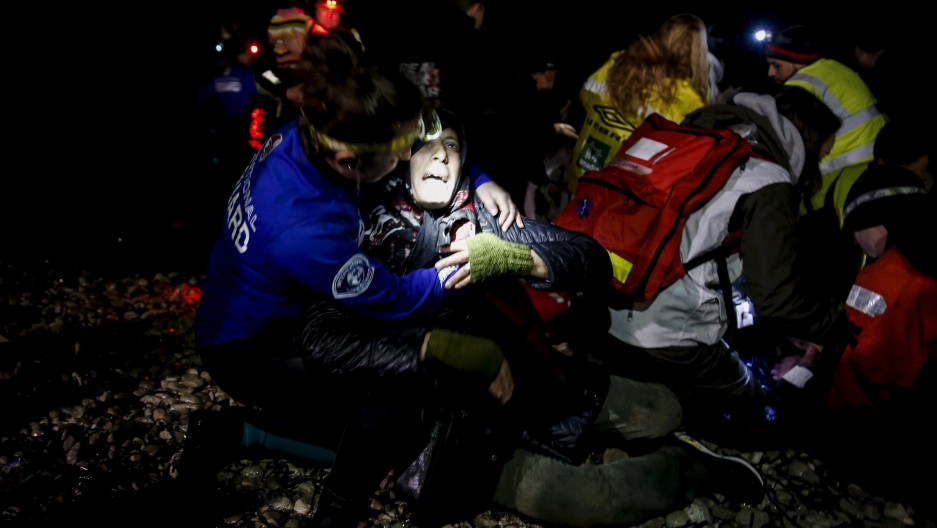 Rescuers try to revive an unconscious refugee who arrived on a dinghy on the Greek island of Lesbos. Two unconscious arrivals were taken to a hospital and were later pronounced dead.

Migrants boarding the legions of flimsy ships crossing the Mediterranean are not all making the journey by choice.

Some are targeted by smugglers, who increasingly take migrants hostage to extort money from their relatives, then coerce the reluctant travelers onto unsafe vessels to get rid of them after they've been paid, according to Joel Millman with the International Organization for Migration (IOM).

Millman says the smugglers who operate out of weak states like Libya are more like organized crime rings than "fee for transport" businesses.

"They seem to have taken a new tact which is to grab people, hold them hostage, try to find family members — usually in sub-Saharan Africa or perhaps someone who's made it to Europe or North America already — and then extort money from them, then get them down to the coast and force them into boats," Millman says.

Millman doesn't deny that there's an enormous demand for seats on smugglers' boats. So far this year about 200,000 migrants have tried to enter Europe by sea.

Some migrants have traveled to countries like Libya hoping to make the journey to Europe later on. However, street gangs in places like Tripoli are increasingly preying on the vulnerable arrivals.

"There's no banks to put their money or to send their money home, so they usually have cash on them," Millman says. "They used to just be beaten and robbed. Now they're beaten, robbed and then held in a place where their families can be directed by cell phone to send money to accounts that pay for their liberation."

So far this year, more than 2,400 of those who tried to cross the Mediterranean perished on the way.

The international community has tried to crack down on migrant smuggling, but Millman says they have "a hard time finding a partner, someone they can work with to try to stop these abuses."

"A lot of people believe that things like building a wall or tightening restrictions or raising barriers for migrants is a way to stop the criminal activity. But actually it's a feeder [for criminal enterprises]," Milliman says. "What we call for is legal, safe and secure migration — and we mean secure migration for everyone including the countries that are taking people in. Otherwise you just have people being fed to criminals who will treat them ruthlessly, exploit them terribly and grow their business basically in defiance of all these efforts to stop them."