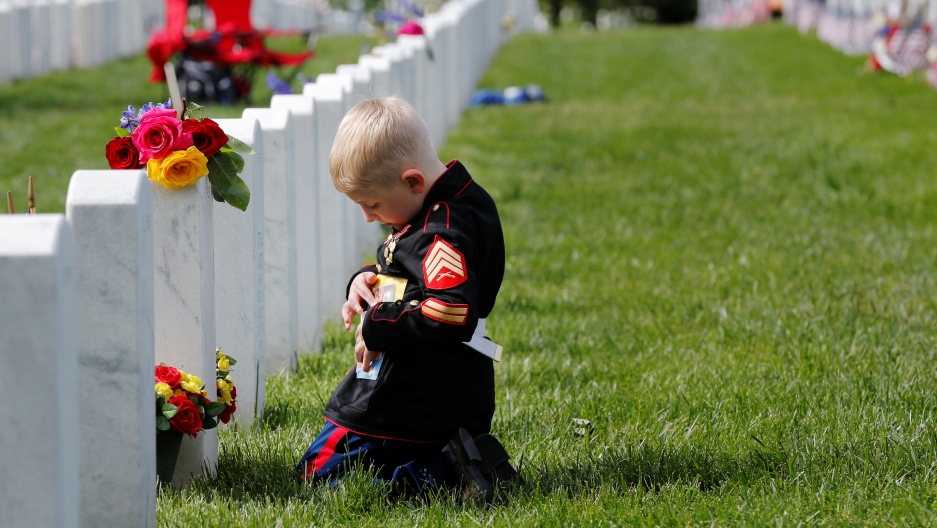 Christian Jacobs touches a photograph of his US Marine father, Christopher Jacobs, while visiting his grave on Memorial Day at Arlington National Cemetery in Washington on Monday.

It so annoyed one US Marine who fought in Vietnam that he complained about it to a fellow veteran. This is a day for remembering the names and faces of those Americans who fought and died, he said.

“Happy doesn’t seem the right word,” the Marine told retired Lt. Col John Nagl, an Army veteran of the war in Iraq who has lost friends in both Iraq and Afghanistan.

“Memorial Day is a time when Americans celebrate liberty. They celebrate those who fell for their liberty, and certainly the friends I’ve lost [in Iraq and Afghanistan], I can’t think of any better way to celebrate them than to throw a burger on the grill next to the pool, be with friends and tell some stories about them. And remember them,” Nagl says.

“That’s what I would want them to do [on this Memorial Day] if the bullet had found me instead of … them.”

Nagl is the current head of the The Haverford School in Pennsylvania and the author of “Knife Fights: A Memoir of Modern War in Theory and Practice.”

“I think ‘Happy Memorial Day’ is an entirely appropriate thing to say,” he says. “I just do hope that we all do remember that on this weekend, as we enjoy time with friends and family, that we remember those that don’t have that chance."

Many veterans are quick to point out that Memorial Day, in contrast to Veterans Day in November, is not really about them. It’s about the 1.2 million Americans who’ve died in US wars going back nearly 250 years.

Nonetheless, this is a holiday when civilians go out of their way to say to veterans, “Thank you for your service.”

It turns out, this seemingly simple expression of gratitude makes some vets feel awkward, embarrassed or worse.

“Thank you for your service is always dumb,” writes one Army veteran who served in the Iraq War, and who is also a friend of PRI’s The World, in response to a Facebook post about the expression.

Tim O’Brien is an Army vet whose experience in Vietnam informed his novel, “The Things They Carried.” When people come up to thank him for serving in the military, “I react with anger,” O’Brien says.

“However kindhearted that ‘thank you’ is, it’s made without much interest in what they’re thanking you for, which is killing people. And, even if one doesn’t personally do it, you’re part of something where that’s the whole purpose or function of it all.”

Only about 7 percent of the American public has served in the military. That means the overwhelming majority of the country has no first-hand experience with the armed forces or with the horrors of war.

“I feel there’s kind of a hypocrisy in it, a ‘thank you’ without much interest in what a person goes through in fighting a war,” O’Brien says. People mostly do not want to know, he contends, “what’s witnessed, what’s done, and how it hurts your soul years and years and decades later.”

Phil Klay is a veteran of the Iraq War and author of “Redployment,” a series of short stories about the wars in Iraq and Afghanistan. Klay says “thank you for your service” can be a heartfelt expression of gratitude. But he says it can also be frustrating when it comes from someone who doesn’t appear to be very engaged with how America’s wars have played out.

“There are consequences [in war] that we all as a country need to think about,” he adds. “You can’t paper over that with a phrase.”

One reason Americans have become so eager to thank military vets has to do with the poor treatment some received when they got home from Vietnam, says Andrew Bacevich, who served as a first lieutenant with the US Army in Vietnam's Central Highlands from the summer of 1970 to the summer of 1971. He's also the author of "America’s War for the Greater Middle East: A Military History."

“There is a widespread conviction, deepened by the events subsequent to 9/11, that the American people should never again fall short in expressing their appreciation for the wartime service of veterans,” Bacevich says.

But with some of these public displays of appreciation for American vets, Bacevich says, there is also something missing: learning.

For many Americans, Memorial Day is a time to set aside politics and show respect for the country’s fallen warriors along with all veterans. But Bacevich says that’s a mistake.

“War is about politics. It is saturated with politics,” he says. “To pretend otherwise is a grotesque error and quite frankly results in dishonoring the memory of those who have served and who have sacrificed.”