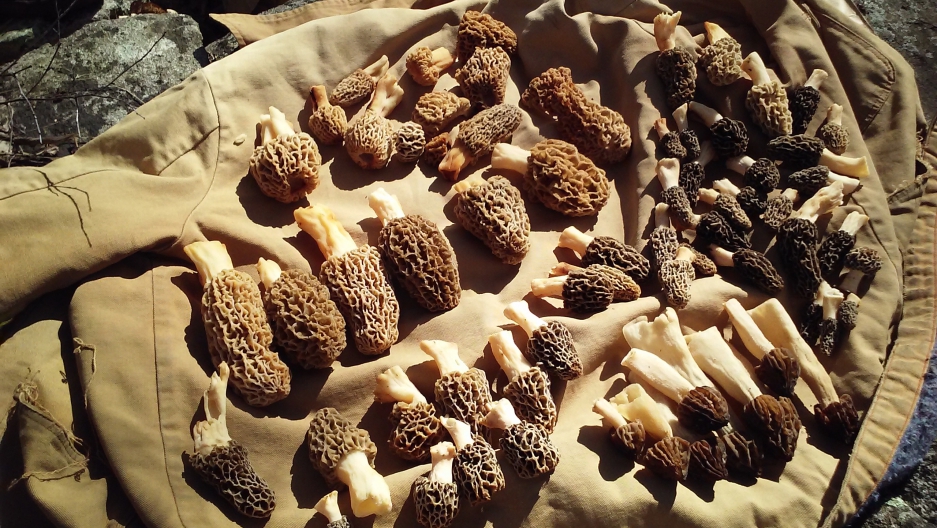 A collection of morel mushrooms.

It’s spring and morel mushroom season is in full swing. If you’ve never dared to eat wild mushrooms before, you’re missing out on all these delicious flavors.

Mycologist and author Gary Lincoff has a few tips for finding some easy-to-identify edible mushrooms this spring and summer, wherever you may live.

“What we recommend everywhere is that people join mushroom clubs,” Lincoff says. “There are clubs in every state of the United States. And there are regular walks and they're usually posted on web sites. So there's all kinds of ways for people to connect with people who are going out looking for mushrooms. And it's better to go in a group than go by yourself … until you really are familiar with the whole lifecycle of each of these mushrooms, doing it with a group is safer than doing it by yourself.”

Veteran mushroom foragers say it takes a while to find your first mushroom, but once you do, you start seeing them everywhere.

“That’s how it works,” Lincoff says. “You have to find the first one … Once you see one, you simply stop and you get down. Literally you start poking around and looking, staring at the ground and you see others.”

3. Know what you’re looking for

Lincoff says it’s better to go mushroom hunting with a particular sort of mushroom in mind that you’re trying to identify.

“It's better to know the mushroom you're looking for than just picking mushrooms and hoping you can identify them,” Lincoff says. “Learn them one at a time.”

4. Stay away from gilled mushrooms

“The common mushroom sold in the market, which is called the white button mushrooms, portabello…those have gills. They have these knife blades on underneath the cap. Those are edible. [However] the group of those kinds of mushrooms include many that are really poisonous, even deadly,” Lincoff says. “So non-gilled mushrooms are much safer for the beginner. So things like the morel or the chicken mushroom, for example … is just way safer than trying to say, ‘I think I know what this is. I'm pretty sure. I'm going to feed it to my family.’ That would be a really big mistake.”

5. Start by looking for certain kinds of trees first, then fanning out and searching for mushrooms near by

The edible part of mushrooms that we gather are just the flowering part of a much larger fungus that’s underground or in a tree. So, many seasoned morel hunters begin their search by looking for elm trees or apple trees, and then scanning the roots of those trees, which morel mushrooms are associated with.

“The [mushroom] is the fruiting body of what is usually not visible,” Lincoff says. “It's in a tree or it's underground. Or it's in mulch, for example … Technically the vegetative part can spread out for 100 yards, perhaps. But the actual mushroom is going to be relatively small.”