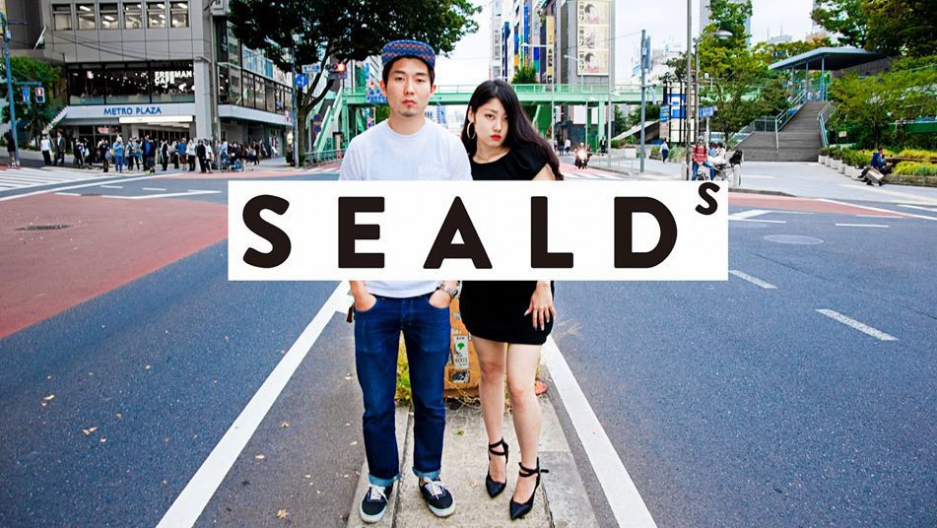 An eye-catching poster from the student group SEALDs, featuring founding member, Wakako Fukuda (right).  SEALDs (Students Emergency Action for Liberal Democracy) has changed the image of protesters in Japan, and made it okay to speak out.

When Aki Okuda was 14 years old, he ran away from home. But this is not one of those kid-runs-away-and-is-brought-back-and-everything-goes-on stories.

Okuda ran away and stayed away.

“I wanted to go to the farthest place possible from Fukuoka,” he says. “I ended up on Yaeyama islands, the southernmost islands in Japan.”

He’d been bullied in junior high and had just stopped going. His home life was also kind of unusual. His father was a Christian priest and his parents took in the homeless. By the time he got to junior high, he says, “the whole ‘let’s help people’ thing at home was so completely different from the atmosphere at school. [It’s like] I didn't know who I was supposed to be.”

And with all those people at home, it was hard to find space to be alone. He laughs and says, “You know, I was an adolescent.” 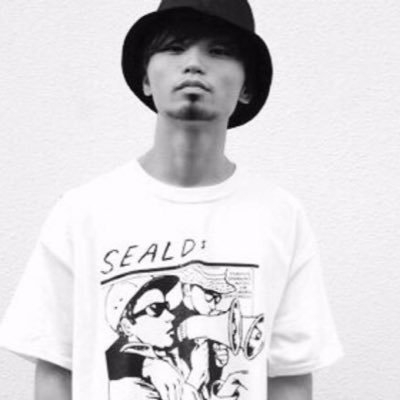 Okuda later went to an unusual boarding school in the countryside, where students got to vote on the rules. Then, just as he was about to start at a good college in Tokyo, the earthquake, tsunami and nuclear meltdown hit Japan’s northeast. It was 2011.

He says the triple disaster was a turning point.

For starters, there was the lack of believable information from the government about what was going on. Then Prime Minister Shinzo Abe’s right-wing government announced it was restarting nuclear reactors. Then it announced a new “State Secrets” law clamping down on journalists, a key reason Japan has fallen in the 2016 World Press Freedom Index from one of the top countries down to 72nd place.

“It felt like the government had gone too far,” Okuda says. “Things were just so out of balance, I felt I had to do something to stop it.”

Normally in Japan, most people don’t talk about politics — not with friends or family. And although in the US, there’s an image of college students as politically active or socially engaged, in Japan, it’s the opposite. College is known as your last chance to party. Being into politics? Not so cool.

“It’s really hard to speak out in Japanese society, and there was this idea that people don't think about politics," Okuda says. "That young people are apathetic.” 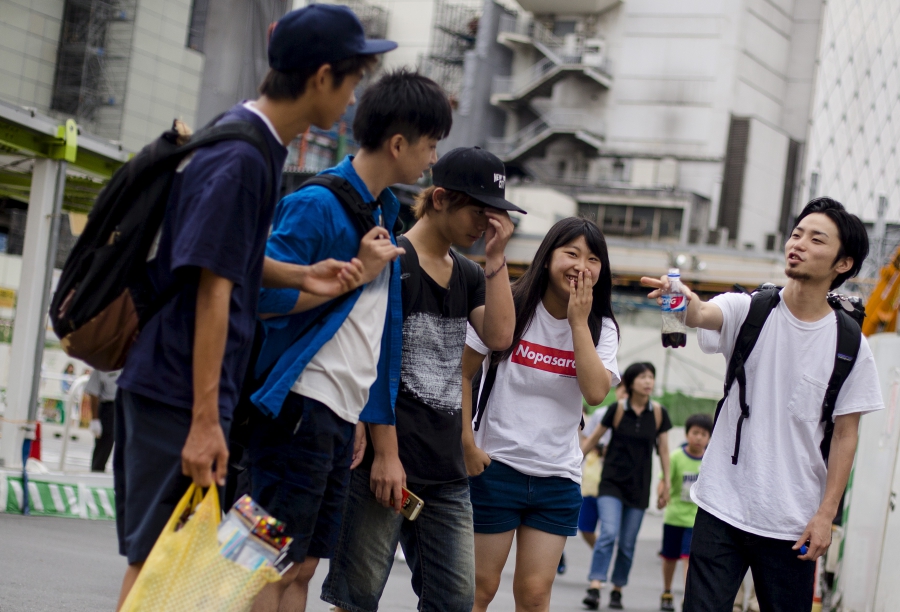 But Okuda says even though people may not be speaking up, there are people who are thinking about politics, including his group — SEALDs — Students Emergency Action for a Liberal Democracy.

Okuda at 23 is now the frontman of what’s become one of the largest activist movements ever in Japan.

Most Japanese view Article 9 — the part of the constitution that renounces war and a regular military — with pride, as central to who they are. And so most opposed Abe’s security bill.

But in Japan, protests have a big image problem. In the 1960s and 70s, there were large student demonstrations that turned violent. People died. And the image of protesters as violent extremists has stuck.

So Okuda and SEALDs knew they needed to change the culture and make it seem like any regular person could and should join. 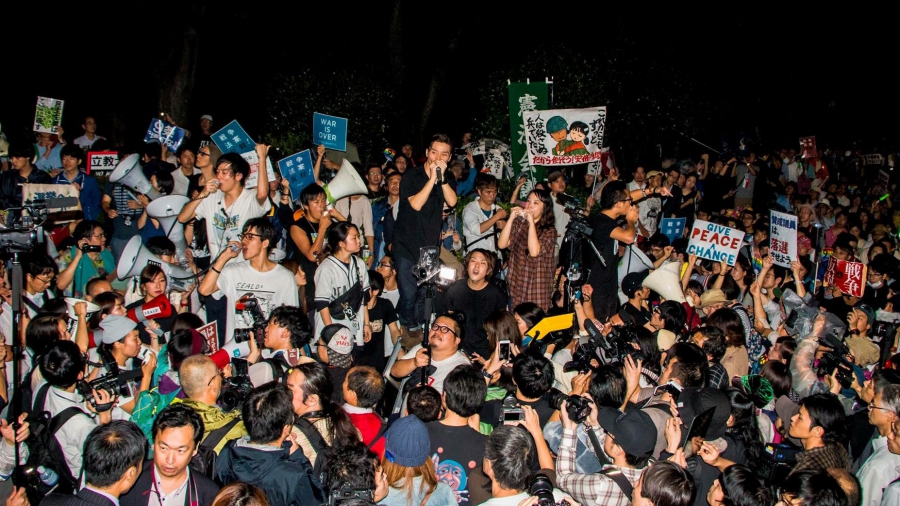 Aki Okuda, leading a chant at a SEALDs protest. It's become one of the biggest activist movements in Japan ever.

SEALDs members would give impassioned speeches.  Prominent academics and politicians started to as well. And SEALDs would lead these endless, call-and-response chants, in informal Japanese calling for the downfall of Prime Minister Abe, the end of war and the protection of their constitution and children.

SEALDs groups popped up all over Japan. And then groups inspired by SEALDs.

David Slater is a cultural anthropologist who has been studying SEALDs since it first appeared on the scene.  He says older generations in Japan have been shocked — and inspired.

“They go wow, those are the people who are now suffering because my own generation didn't do anything during the 1980s and 90s and now they’re having the courage to speak up, even at personal risk,” Slater says.

Okuda was invited to speak in the Diet, Japan’s parliament. But in the end, after an actual physical fight, Abe rammed the military bill through.

SEALDs turned their attention to the 2016 election, focusing on voting out the ruling political power. Recently, they helped bring opposition parties together. There’s actually a new political party in Japan. And they’ve been doing big get-out-the-vote campaigns.

But in all of this, there’s criticism of SEALDs that they’re not serious enough, that they’re focused on style over substance. 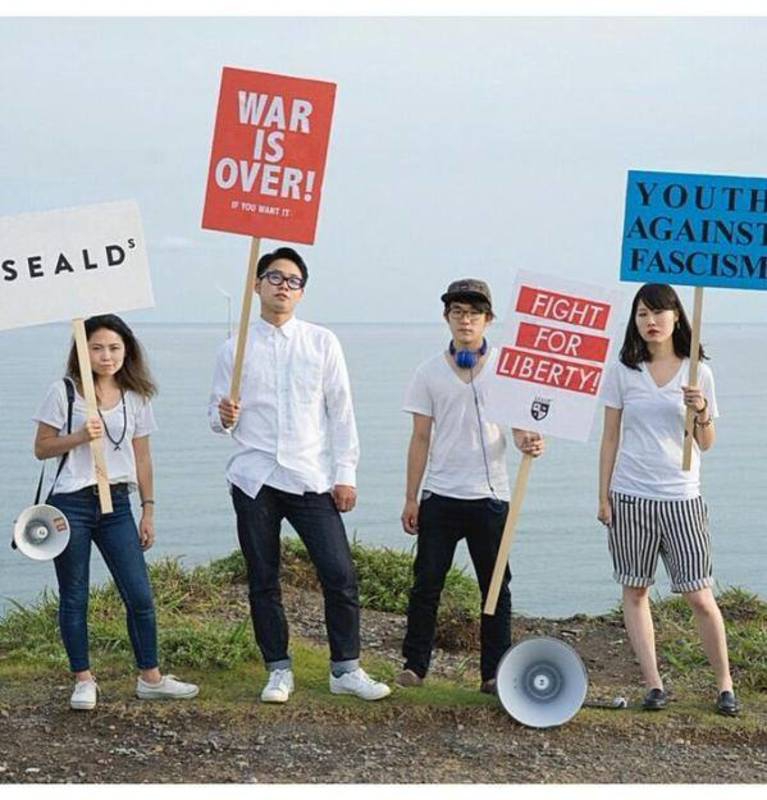 Some critics say that SEALDs is all style over substance. Aki Okuda says that just means they've succeeded in changing the image of protestors.

When Okuda hears that, though, he laughs: “That was our strategy,” he says, to change the image of protests and protesters. “So the fact that people say that means it worked. “

He says SEALDS’ larger goal has always been to create a culture in Japan where it’s OK for anyone to just say their opinion and talk about politics openly, with co-workers, friends and family, in public — to create a new normal.

Slater says the influence of SEALDs, like any large social movement, will only be fully understood years down the road. But people are already being more open about politics. He says his students are more aware of the issues and of their potential for participation.

And SEALDs — and Okuda, especially — have basically become rock stars in Japan. Okuda does multiple interviews daily and speaks at events. There’s a new documentary out. He’s also working on two books, one by himself, one with other members of SEALDs. Okuda has 28,900 followers on Twitter.

SEALDs members have also been on the covers of Japanese fashion and culture magazines. Earlier this year, Okuda and one of the many prominent women of SEALDs appeared in Rolling Stone. And for this upcoming election, SEALDs has partnered with a cool fashion brand; their "Don’t Trash Your Vote" line is about to pop up in one of Tokyo’s most popular department stores.

Despite all of that, Okuda says SEALDs plans to disband after the election in July. Okuda, who’s now in grad school, says they were always a group of individuals and each will figure out what they want to do next.

Whatever happens, it’s clear that something in Japan is changing. And a group thought of as the most disconnected is leading the way.