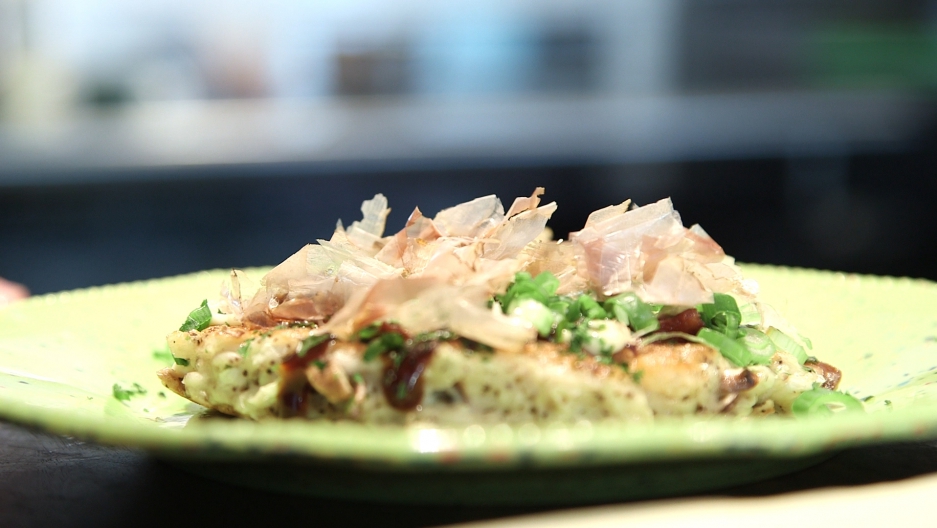 Editor's note: A previous version of this article was criticized for its tone and substance, including its lack of representation of Japanese or Japanese American voices. We agree that the story missed the mark in describing this common food as "funny" and in assuming the audience who read it would only have experience with Western pancakes. We have made adjustments to the framing in the text, though the piece still lacks an essential Japanese voice. (See the original text.) Our policies call for us to unpublish a story only in the most specific circumstances, as a matter of public record and transparency with our audience.

I was in Japan 14 years ago when a friend from Hiroshima wanted to introduce me to a beloved local food. It’s called okonomiyaki, informally referred to as the Japanese pancake. But it’s unlike what I had previously thought of as a pancake.

It wasn’t for me, I thought.

The dish has cabbage, egg, fish flakes, scallions, sometimes pork. In Hiroshima they use noodles as a base. Then it’s topped with a type of Worcestershire sauce and Japanese mayonnaise.

Merry White, an expert on Japanese culture with Boston University, had a similar experience to mine.

“I didn’t like it the first time I had it,” says White. “It’s a very goopy dish, it doesn’t look pretty. The Japanese have an expression: me de taberu, we eat with our eyes. And I don’t eat with my eyes, I close my eyes when I eat okonomiyaki because it’s kind of a mess.”

“What it has on top are bits of shaved bonito, dried bonito flakes, fish flakes, which are dancing because of the heat of the egg mixture that has been cooked. So you’ve got this visual thing going on,” says White.

Okonomiyaki means “as you like it,” and Japanese people make it with many different ingredients. White says she tried it with uncooked oysters on top. She described it as “slimy,” which, she adds, can be considered a favorable characteristic in Japanese food. But okonomiyaki was a tough sell for a Westerner like me.

The dish is centuries old, but became popular in Japan after a devastating earthquake in 1923, then again after World War II.

“Food was short,” says White. “Cabbages were brought in, because cabbage is a very cheap, easily grown, extender of food. People had to be very flexible about what they ate. If they could get eggs, they could have okonomiyaki. Anything went with it.”

It's most well known today in Hiroshima and Osaka, both places offer up their own competing styles.

I gave okonomiyaki a second try in Japan and bought some from a street vendor in Tokyo; it’s often a street food in Japan. And something clicked. Not only did I like it, I became somewhat obsessed with it. I craved it. I sought it out. (Merry White had a similar transformation, by the way.)

But I had only seen it once in the United States, at a hole-in-the wall in San Francisco. I'm sure it's available other places, as well. Recently, I was out to dinner in Boston, near Fenway Park, at a hip, new restaurant called Hojoko. And there it was.

“And you’ll notice with okonomiyaki, it’s essentially vegetables that are held together by pancake batter,” said Hart Lowry, Hojoko’s executive chef, talking as he cooked up some okonomiyaki. He adds mountain yam and bacon to his okonomiyaki, to make it unique, and more palatable for Americans.

“It’s a place where people go to have fun with their friends and relax and get weird,” says Lowry. “The music is loud, the food is loud, the drinks are loud. In most restaurants, alcohol supports the meal. We’re kind of the reverse of that.”

In Japan, okonomiyaki is a drinking food, too. Lowry says in Boston, it’s also a fun way to push people out of their comfort zones with Japanese cuisine. I asked why the dish isn't on the menu of every Japanese restaurant in the US.

“Yeah, I don’t know why it’s not popular, it should be,” says Lowry.

Merry White believes it hasn’t caught on everywhere because it’s an informal food.

“You go into a Japanese restaurant and say ‘okonomiyaki,’ they’re going to look weird at you," says White.

But today could be a big chance for the dish to catch on and go international.

“Perhaps if President Obama were to taste okonomiyaki in Hiroshima, it might become a trend food,” says White. “I think it could be a wonderful street food here.”

There are perhaps 2,000 places serving okonomiyaki in Hiroshima. So far, there are no reports of the president trying any.