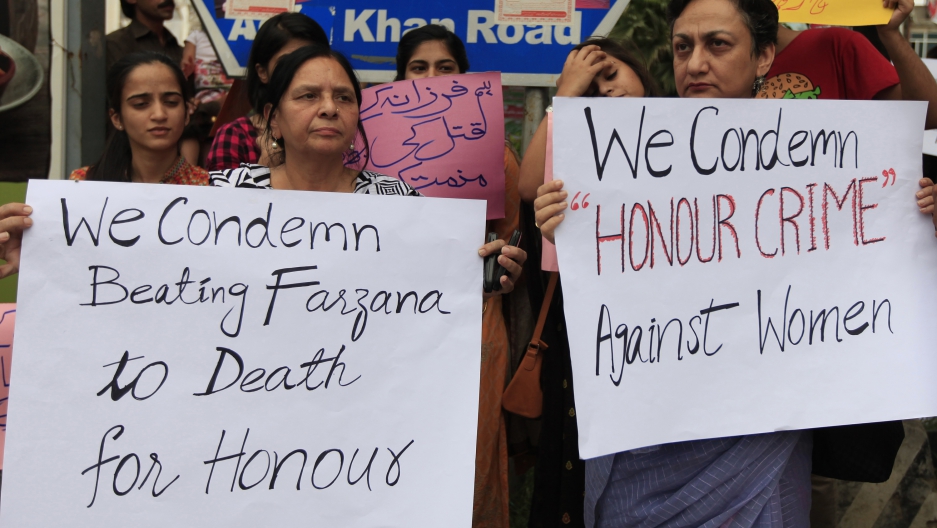 Members of civil society and the Human Rights Commission of Pakistan hold placards during a protest in Islamabad May 29, 2014 against the killing of Farzana Iqbal, 25, by family members on Tuesday in Lahore.

Pakistani media and activists poured scorn Friday on a suggestion from an Islamic religious body that men should be allowed to "lightly beat" their wives, made in their draft of a women's protection bill.

The Council of Islamic Ideology released a draft of the bill on Thursday, their response to progressive legislation giving women greater rights and protection in the province of Punjab.

Local media quoted the draft as saying: "A husband should be allowed to lightly beat his wife if she defies his commands and refuses to dress up as per his desires; turns down demand of intercourse without any religious excuse or does not take bath after intercourse or menstrual periods."

The proposal was met with a wave of mockery in the media and online Friday.

The country's biggest and most influential newspaper, the English-language daily Dawn, published a satirical article with a list of things people could beat other than their wives -- including eggs, the bottom of ketchup bottles, and the Michael Jackson hit Beat It.

The article was a rare example of the media mocking those claiming to speak in the name of religion in conservative Muslim Pakistan.

The draft was also slammed by the Human Rights Commission of Pakistan, which condemned its recommendations as "ridiculous" and called for the council of "zealots" to be disbanded.

"It is difficult to comprehend why anyone in his right mind would think that any further encouragement or justification is needed to invite violence upon women in Pakistan," the HRCP stated. 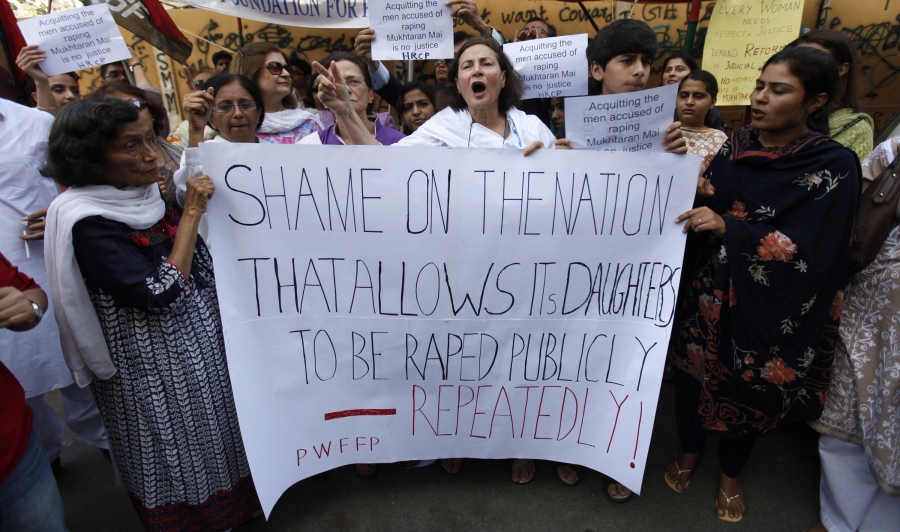 Activists hold a banner during a protest rally against a court decision involving Mukhtaran Mai, a victim of a village council-sanctioned gang-rape, in Karachi, Pakistan April 23, 2011.

Online in Pakistan, the bill was met with derision.

"This body should be dissolved, preferably in acid," wrote one Twitter user, as others expressed bafflement and anger.

Women in conservative Pakistan have fought for their rights for decades, in a country where so-called honor killings and acid attacks remain commonplace.

But the Punjab Protection of Women Against Violence Bill redefines "violence" to include "any offence committed against a woman" including things like domestic or emotional abuse, stalking or cybercrimes.

The bill, which was passed in February, also provides for a universal toll free help line for the women, and establishes district protection centers and residential shelters under a phased program.

It also allows courts to order a GPS tracker installed to monitor a defendant's movements.

The CII, formed in 1962 to advise parliament on the compatibility of laws with Sharia, has previously spoken out against the bill.

The council's recommendations are non-binding, and it has drawn widespread criticism in the past for other rulings — including in 2013, when it suggested making DNA inadmissible evidence in rape cases, instead calling for the revival of an Islamic law that makes it mandatory for a survivor to provide four witnesses to back their claims.

CII chairman Maulana Muhammad Khan Sherani emphasized to AFP that the bill is still being drafted.

"Islam does not allow violence against women," he said.

"There may be a dispute between husband and wife but that is something separate from torturing wives."