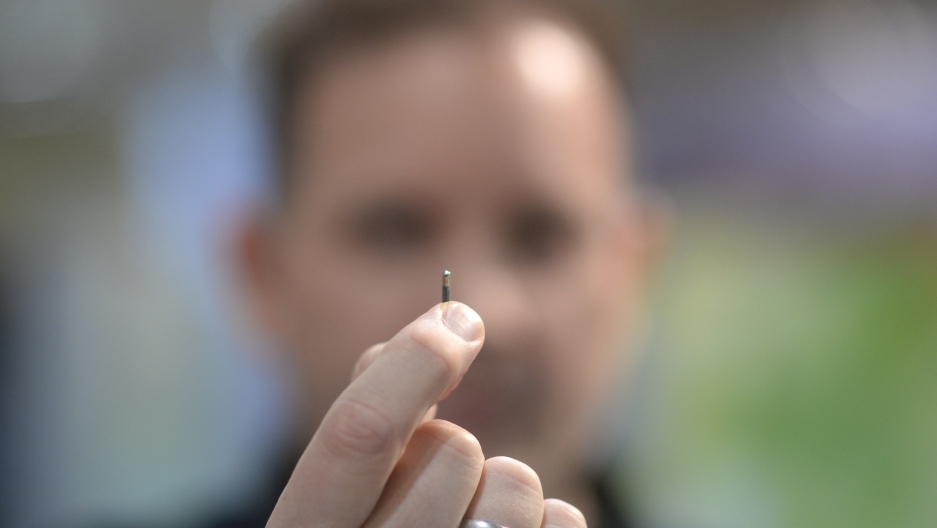 A Digiwell employee shows an RFID chip, which can be engrafted in a person's hand and used as a form of ID. It is not, however, a GPS tracker.
Credit:

In Indonesia, mass indignation followed the horrific gang rape, in April, of a 14-year-old girl walking home from school.

And so did a bold proposal: Why not implant microchips inside all convicted child rapists? That way, police would forever know their whereabouts — even after the offender was released from prison.

Pushed by Indonesia’s justice ministry and its National Commission for Child Protection, the concept imagines traceable chips implanted on offenders’ legs near the ankle. As one official proclaimed, the implants would allow authorities to “track their every footstep.”

This plan — still under consideration — is seemingly designed to soothe outrage and shore up the government’s tough-on-crime bonafides.

One major setback? It doesn’t make much sense. Technology-wise, this chips-for-pedophiles scheme is considered somewhere between wildly impractical and downright impossible.

“This is an absolutely ridiculous idea,” says Amal Graafstra, a Seattle-based “biohacker” and expert in subcutaneous microchips.

Graafstra is a self-described “double RFID implantee”: two radio-frequency identification chips, one in each hand, allow him to log on to his computer and even start his motorcycle with a wave of the palms. He sells self-implantation kits online so that others can be liberated from passwords and keys.

These radio-frequency chips, the size of a rice grain, are the most sophisticated implantable devices on the market. But they should not be confused with GPS trackers. The RFID transmission radius, Graafstra says, is limited to feet — or a mere one to two centimeters to get a “good read.”

“The plan to use these devices as ‘tracking devices’ is based on Hollywood movies and not actual facts,” he says. “It’s a completely pointless endeavor which damages the real-world use cases for human-implanted RFID transponders.”

These RFID implants are also easily thwarted by covering the chip with a metallic, mesh fabric that is easily purchased online. Never mind the fact that anyone with a pocket knife and some courage could dig the device out of their own flesh.

What the Indonesian plan seems to envision is a microchip tracked by GPS. Yet no such device has hit the market. And for good reason: it would likely require burying a much larger device — containing a battery and antenna — inside a person’s body.

For the layperson, assuming that GPS trackers can be planted inside humans is somewhat forgivable. After all, don’t scientists tag and track endangered wildlife from afar, from polar bears to migrating birds?

Indeed they do. But polar bears can be fitted with bulky collars. And some of the tiniest GPS trackers available — which can be attached to small birds — look like this: 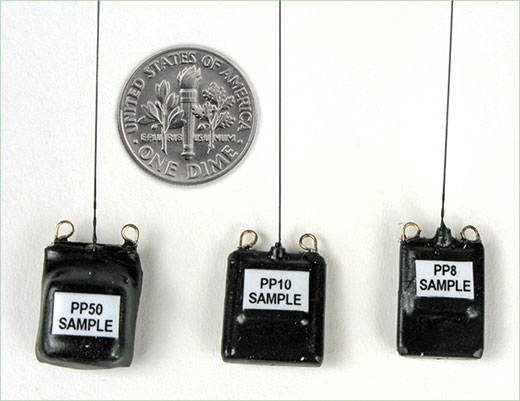 The PinPoint GPS tag weighs about one gram.

The complications keep piling up. This miniature GPS-enabled geo-locator is not planted underneath a bird’s skin, which can block the outgoing signal. It’s simply fitted to its body.

Devices this small, which weigh roughly one gram, have also seen limited field testing. In its most prominent usage yet, the tracker (called the Lotek Wireless PinPoint GPS tag) was attached to Ovenbirds —20-gram creatures that can roam from Maryland to Cuba.

But as researchers lamented in the journal Scientific Reports: “The fact that they need to be retrieved remains a disadvantage.” In other words: To know the exact whereabouts of implanted animals, you still have to download data from the physical chips.

Indonesia has raised the idea of microchipping its citizens before. In 2008, lawmakers introduced a plan to insert chips in people with HIV and AIDS living in Papua, the nation’s most poverty-stricken province.

That plan was also promoted with counterfactual rhetoric.

One of its biggest proponents, a doctor and lawmaker named John Manansang, boasted to TIME that HIV and AIDS sufferers would be tracked like “birds and animals” and that a chip would “send off a signal when infected blood comes into contact with non-infected blood so it would monitor the spread.”

The plan never came to fruition. Nor did it do much to soothe those who fear implanted microchips will be used by Orwellian states to subjugate citizens — with society’s unwanted serving as the preliminary guinea pigs.

Though Indonesian officials’ current proposal to microchip criminals appears unfeasible, similar concepts have swirled around parliaments as far away as the United Kingdom.

Ministers there have considered chipping criminals with RFID devices — an idea that is entirely possible, as biohackers like Graafstra know all too well. In the US, RFID devices are used to track inmates within prisons but take the form of anklets, not implants.

In fact, if they are so inclined, Indonesian officials could always opt to track rapists using a device already worn by some 200,000 Americans who’ve run afoul of the law: the clunky, plastic ankle monitor.