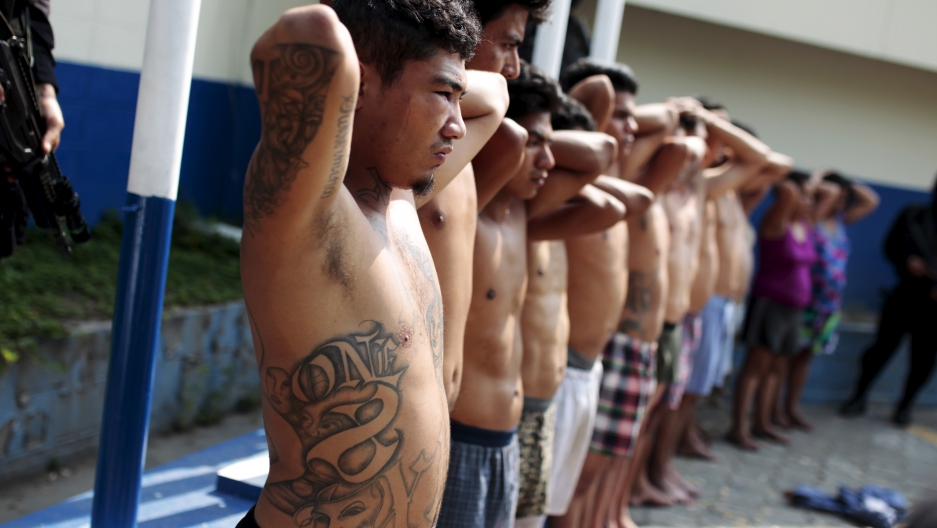 13 suspected members of the 18th Street Gang are presented to the media after being arrested by the police in Soyapango, El Salvador in March.

Teens hoping to escape the pressure of gang recruitment in El Salvador by fleeing to the US might breathe a sigh of relief when they cross the border.

Their solace is often short-lived. If they haven't checked their Facebook privacy settings — and even sometimes if they have — the gang extortions and threats soon pop up again.

"When [immigrant teens] come to the United States, there's always a way to be found, unfortunately, unless someone can be in a situation that's similar to a witness protection program," says Salvadoran American Susan Cruz, who helps young immigrants in conflict with the law. "They start cross-referencing by cell phone numbers. You can look up someone's Facebook profile with their cell phone number alone."

More: Óscar Martínez on why El Salvador is a 'good place to kill'

Social media and the prevalence of cell phones have allowed gang networks to communicate in "real time." And immigrants often chose to stay in touch with family members back in El Salvador, making their online footprint easy to follow.

"I had a situation with a young man who stayed in communication with his younger sister, and through her friends at school [the gangs] found him here in the United States, and they attempted to extort him again," Cruz says.

But Central American gangs prioritize finding victims who flee abroad. Cruz tells the story of one 12-year-old girl who lived in El Salvador with her grandmother after her family had fled to the US. She was pressured to become the girlfriend of a gang member. When she refused, she received threats on slips of paper slid under her grandmother's door. She made her way to the US and is now fighting for asylum in court.

"The gang members have gone to the grandmother's house asking about the girl. They've also indicated [that] for the grandmother to be OK, someone is going to have to pay for her safety," Cruz says. "Even if the kids leave [El Salvador] they have survivor's guilt when other relatives are left behind and are still facing threats of violence."

The recent unraveling of a truce between El Salvador's two main gangs has led to a new spike in the country's murder rate. That's likely to send even more youth across the border seeking safety.

This month, the country was further destablized when El Salvador's attorney general began arresting 21 individuals who helped broker the truce in 2012. The decision was "political," says Adam Blackwell, a former official with the Organization of American States who worked with the committee that tried to guarantee the truce.

"These folks working with me, most of them fairly low- to mid-level bureaucrats, I can assure you [they] didn't break any laws in front of me or with me," Blackwell says. "We were just trying, in a situation with high moral hazard, to bring peace."

Hopes for a new gang truce are dim, and refugee advocates are bracing for continued violence. Cruz says the appeal of gangs is likely to continue, because amid chaos, they offer their members a sense of belonging and protection. Cruz should know, she was a gang member in her youth.

"Gangs take the place of family, and gangs fill society's voids," Cruz laments. "Until [governments] provide those opportunities to those kids who need them, and they treat them like family, and they give them the hope and sense of safety and belonging those kids need, the gangs are going to continue filling those voids."