In Bilgoraj, Poland they're putting finishing touches on this replica of the Wolpa Synagogue.

Courtesy of the Bilgoraj XXI Foundation

A small town in Poland is building a wooden synagogue — more than 70 years after the Nazis burned all the country's wooden Jewish temples to the ground.

Thing is, there aren’t any Jews left in the town of Bilgoraj. Even the retired businessman who came up with the idea, 62-year-old Tadeusz Kuźmiński, isn’t Jewish.

But he had a vision, and a dose of historical nostalgia.

“One day he woke up in the night and he got the idea of rebuilding a wooden town in Bilgoraj — with a synagogue in the center of the market,” said Kinga Staroniewska, the coordinator of the Bilgoraj XXI Foundation that’s carrying out the project. She spoke on behalf of Kuźmiński, head of the foundation, because he does not speak English.

A replica of a pre-World War II icon, the temple is the latest monument being erected in Poland at a time when it's witnessing a small Jewish revival. 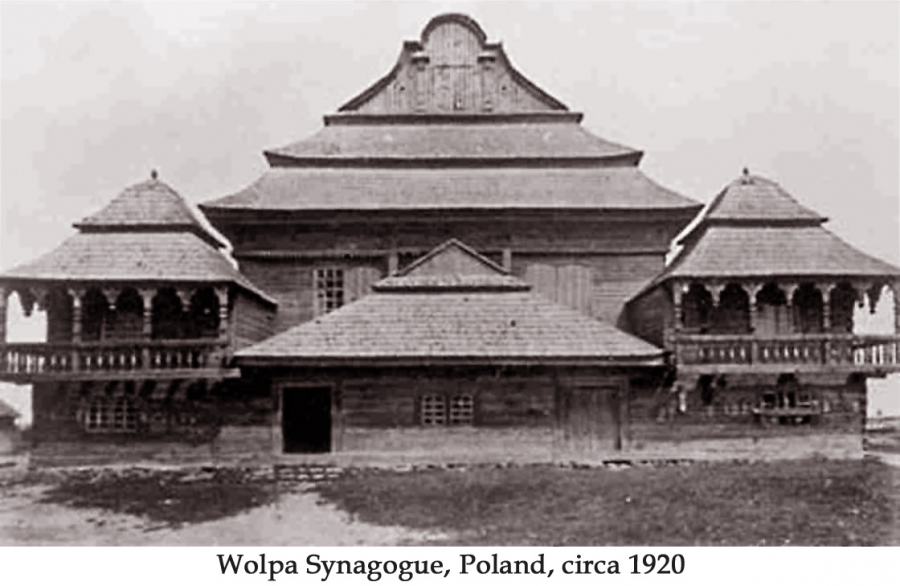 An old postcard showing the temple that used to stand in Wolpa, a town in what's now Belarus.

Using prewar photos and measurements, the temple is based on the 18th century Wolpa Synagogue, Staroniewska said. That architectural masterwork stood in what used to be Poland and now is western Belarus. It was known as the most beautiful synagogue in Eastern Europe before the Germans destroyed it.

The replica is not meant for religious practice, however. The foundation coordinator explained that the purpose is to give people a chance to visit a historical house of worship.

“[Kuźmiński] is retired and he wants to do something more than just sitting in a chair,” Staroniewska said. “The main reason is to leave something for the next generations, to show how Bilgoraj looked before World War II, when Jews, Muslims, Russians and Poles were all mixed together and liked each other.”

That last sentiment may sound a bit romanticized. There was some relative coexistence among those cultures before the war. There were also moments through history of sheer brutality.

Poland’s Jewish population dates back centuries and is believed to have once been the largest in the world. Little Bilgoraj used to have a thriving community.

Before World War II, about 5,000 Jews lived in Bilgoraj — more than 60 percent of the population — but only the 500 families that fled to the Soviet Union before the Nazi occupation survived. They did not return to Bilgoraj after the war. The Nazis killed all the Jews who remained, and destroyed the Jewish school, the Jewish hospital and the synagogue. They used the stones from the Jewish cemeteries to pave the streets, Staroniewska said.

Prior to the war, there were about 200 wooden synagogues in Poland, Lithuania, Belarus, Ukraine and Latvia, some dating back to the 17th century, according to Ewa Małkowska-Bieniek, an art historian at the POLIN Museum of the History of Polish Jews. The interior of the structures were richly decorated with paintings that often depicted perhaps unexpected items, like zodiac signs, elephants, lions and unicorns. Only about five modest wooden synagogues in Lithuania survived the war.

Attempting to further reflect Bilgoraj's multicultural history, Kuźmiński is also planning to build a mosque near the synagogue, in honor of the Tatar Muslims who used to live in his town.

About 2,000 of Poland's residents identify as having Tatar roots, according to the 2011 census.

Bilgoraj’s Tatar community wasn’t killed off by the Nazis, said Staroniewska, but many members converted to Catholicism. The town's mosque was destroyed in the 19th century and the foundation plans to rebuild it based on a painting that survived.

Imitation temples and mosques aren’t the only things popping up. Kuźmiński also built wooden homes like the ones people lived in before the war. They look quite different from the Soviet-era apartment blocks that currently dot the town, Staroniewska said.

One of the wooden houses is a replica of the home of Isaac Bashevis Singer, the late Polish Jewish author who won the Nobel Prize in Literature in 1978. About 100 years ago, Singer lived in Bilgoraj when he was a teenager in the home of his grandfather, who was a rabbi. Also based on a prewar photograph, the house opened to the public on April 23 as what Staroniewska described as the first museum dedicated to Singer in the world.

The Bilgoraj XXI Foundation is now raising money to paint murals on the reconstructed synagogue’s ceiling. Staroniewska estimates that will cost about half a million dollars and take several years.

Prayer houses with nobody praying in them? That might sound strange, but some people in Poland say Kuźmiński’s project is a good one.

“This is our history and it has to be remembered whether there are Jews in Bilgoraj or not,” wrote Warsaw resident Marcin Kotas in a Facebook message. “Without keeping the past in memory, we won’t be able to make the future free of past horrors. History likes to repeat itself unless you work to change it.”

“I think it’s a great idea because he felt some connection to it,” he said about the Polish businessman’s project. “I guess because he feels something is missing in the town.”