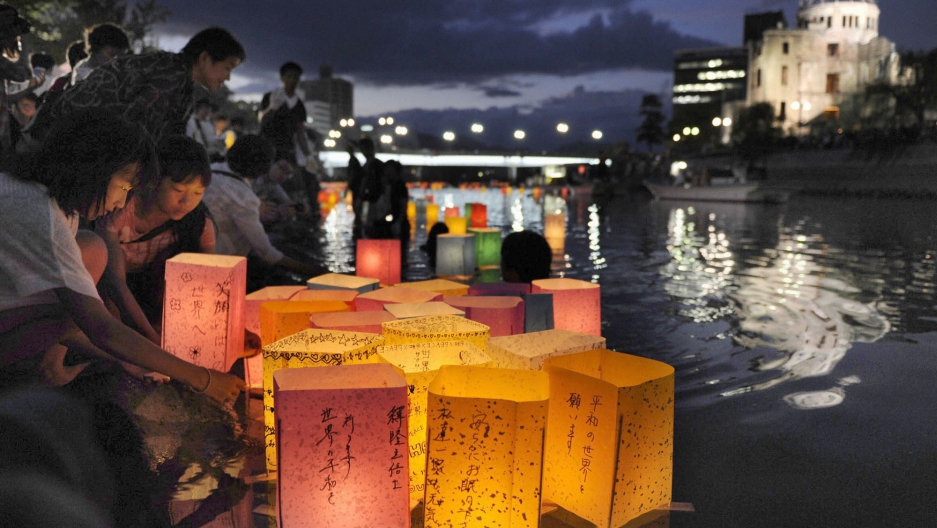 Hiroshima residents release paper lanterns on the Motoyasu river facing the gutted Atomic Bomb Dome in remembrance of atomic bomb victims on the 67th anniversary of the bombing.

When President Obama visits Hiroshima with Japanese Prime Minister Shinzo Abe on Friday, it won't be a time for "repair work" on the narratives told about World War II.

It's no mystery why the US leader won't be apologizing for the atomic bomb the US dropped on Hiroshima in 1945. Retelling the story of how the war ended would leave both politicians vulnerable to political attack.

Obama has offered another explanation of why he won't be offering regrets.

"It's important to recognize that in the midst of war, leaders make all kinds of decisions," Obama told Japanese national broadcaster NHK. "It's a job of historians to ask questions and examine them."

Historians are asking questions, and answering them. Academics like Gluck say Japanese and American narratives about the bombing of Hiroshima differ radically, and that each misses something critical about what actually happened in 1945.

"The story on the Japanese side is that the atomic bomb gave postwar Japan a mission for peace, and so the story of the bomb begins at the end of the war," Gluck says. "In the United States, the story of the bomb is that the bomb ended the war and saved American lives, so the American story ends with the war ... [ignoring] everything after Hiroshima and Nagasaki, and that would be the effects of radiation and the nuclear arms race."

Japan's narrative about WWII looks forward rather than back and tends to ignore Tokyo's 1937 aggression in China, according to Gluck.

Still, she and other historians applaud the Japanese and American leader for at least planning to make a symbolic statement about the hopes and prospects for a future free of nuclear war.

Gluck says neither Obama or Abe will break the silence on key issues surrounding the use of the atomic bomb. But in her imagination, they would each take an important step this week.

"I would image that the Japanese would say that we committed multiple acts of aggressive war and atrocities which we will never again commit. In other words, the Japanese would put 'the war' back into the story," she says. "And what I'd like President Obama to do in my dreaming imagination would be to put the post-nuclear attacks part of the story back in, which is of course ... the victims of the atomic warfare and also the nuclear arms race."

Related: What would be the effect of a Hiroshima-style bomb on your hometown?