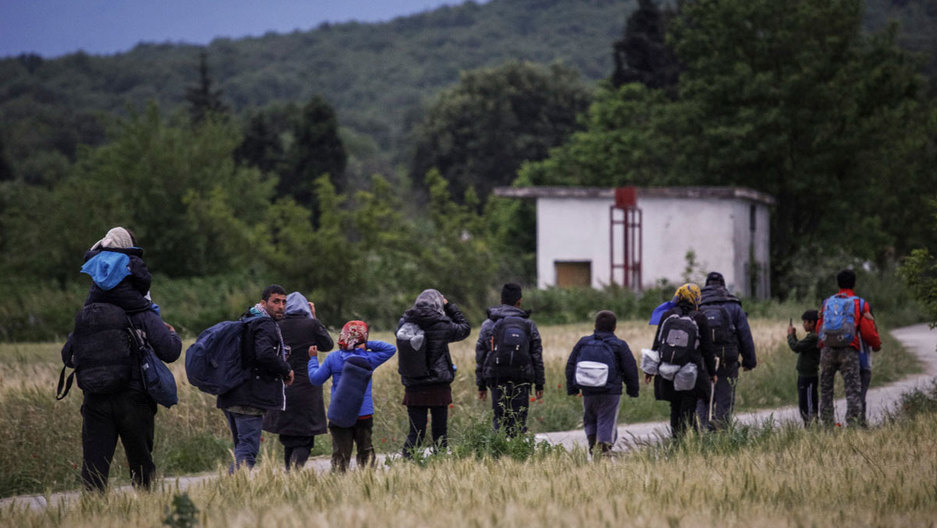 Immigrants leaving Idomeni camp earlier this week in an attempt to cross illegally into Macedonia in order to continue their journey toward Western Europe.

Once, packed. Soon, no more.

Idomeni, the camp in northern Greece that is currently home to about 8,500 refugees from Syria, Afghanistan and elsewhere, is being emptied.

Hundreds of police officers and riot police moved into the area at dawn Tuesday. As the operation was beginning, Greek journalist Liana Spyropoulou tweeted that she had “never seen so many officers from the riot police gathered in one area.” 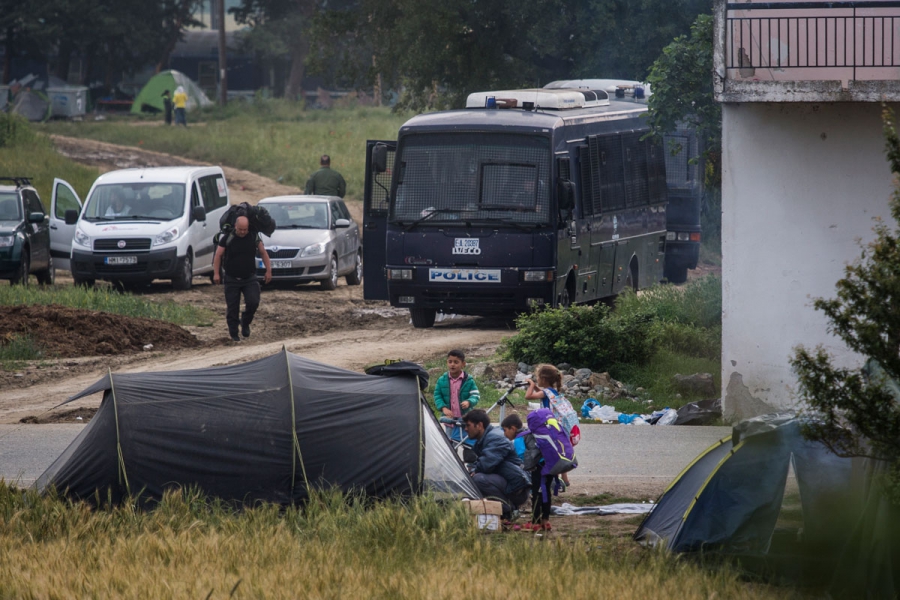 Police surrounded Idomeni Camp in order to begin evacuating the approximately 8,500 immigrants and refugees who have been camping there, many of whom arrived in early March.

That’s saying a lot, given that austerity protesters and riot police clash violently in the streets of Athens with regularity.

Dark blue police buses crowded the square of the tiny village of Idomeni next to the camp. They were an incongruous sight next to the small country houses with tile roofs and gardens bursting with flowers. A helicopter buzzed overhead.

Last Wednesday, a clash between a small group of refugees and the police inside the camp escalated as protesters hurled rocks and the police responded with tear gas. Families and children fled their tents and ran to escape the fumes, which enveloped the entire camp.

With such a heavy show of force today, many feared that the operation could provoke a repeat of Wednesday’s violence. But so far it has been calm. 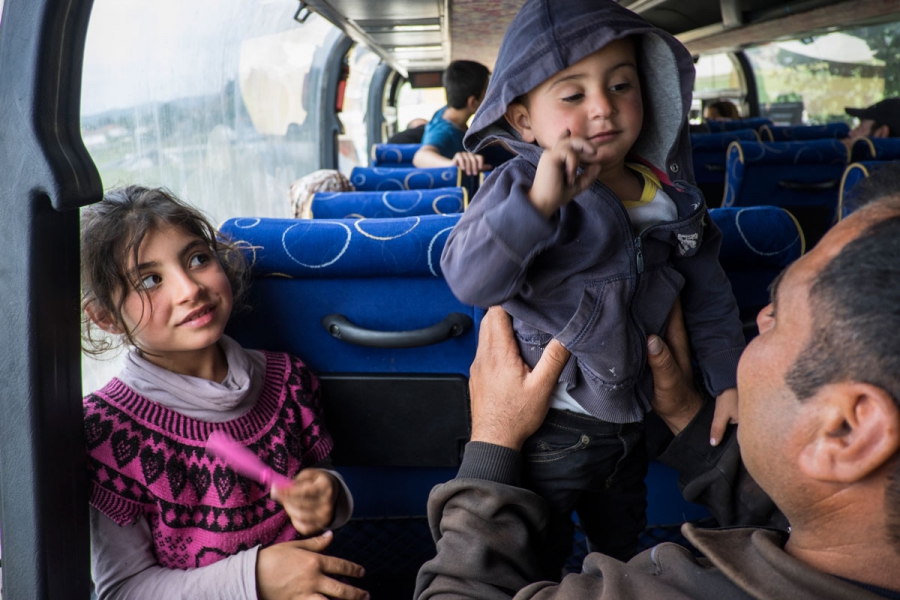 Syrian families aboard a bus bound for Oraikastro Camp after agreeing to leave Idomeni under police pressure.

Like the rest of the press, I observed these events from a distance. All media except the state-run TV network and news service were banned. Plainclothes police dressed as refugees patrolled the camp last night to find photographers and journalists, hiding in tents to try to document the proceedings. Only a few escaped their flashlights.

Many NGOs were also limited or banned from conducting their usual activities in the camp. Ever since thousands of refugees started pouring into Greece last summer, these people have played an immensely important role. They provided healthcare, food, even activities such as facepainting for children or German or English lessons.

Idomeni had a large contingent of NGOs and volunteers and journalists and others have been able to visit easily. Over the last week, many refugees told me that they didn’t want to leave Idomeni and go to an official camp. One of the top reasons is they fear isolation. The chaos in Idomeni was dangerous for some, no doubt. 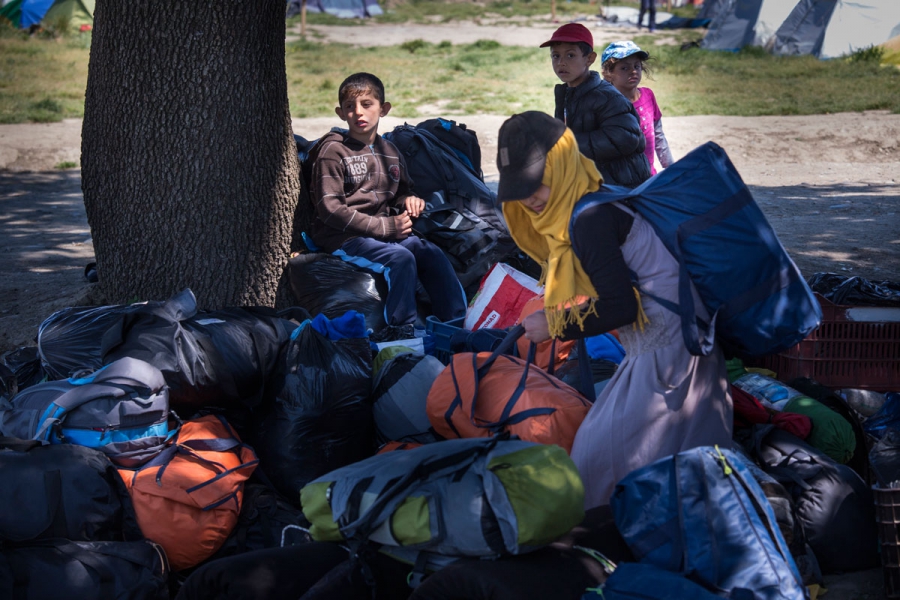 Refugees waiting to board a bus to Oraikastro Camp a few days before Idomeni Camp evacuation began.

The very legitimate need of a beleaguered Greek government to restore order to its transportation system and to a village of 100 mostly elderly residents is at odds with the need of these people for a home. For many, Idomeni became a place where they knew their neighbors and where they kept their dream of getting north alive.

In clearing Idomeni, Greece says it will provide a formal refugee network with applications for asylum, reunification and relocation.

Day one went went surprisingly well. But it’s too soon to say that the trains are going to be running on time. 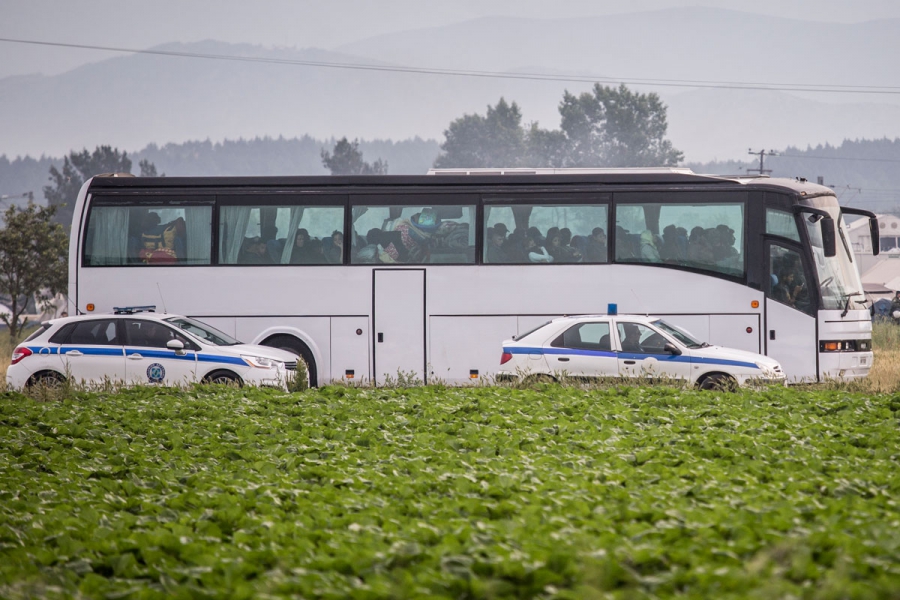 Police escort a bus from Idomeni Camp during operations to evacuate approximately 8,500 immigrants and refugees, many of whom have been there since March.

Over the next days or weeks, the Greek government will close Idomeni.  But the people who were living there, not because they wanted to, but because they found themselves stuck there when policies changed and the safe harbor they were seeking from the European Union seemed to evaporate, will still be inside Greece with the same needs.

On Sunday, I ran into a woman from Kobani, Syria who I met in Idomeni when I visited one of the new camps set up by the Greek military in the industrial outskirts of Thessaloniki. She and her husband had fled ISIS with her husband and baby daughter. They cried with joy when their raft reached a Greek island. But ever since, they have faced closed borders and uncertainty.

After the riots and tear gas on Wednesday, and with rumors of today’s police action circulating,  she and her husband decided to leave with their 9-month-old daughter and take their chances that another camp would be better. 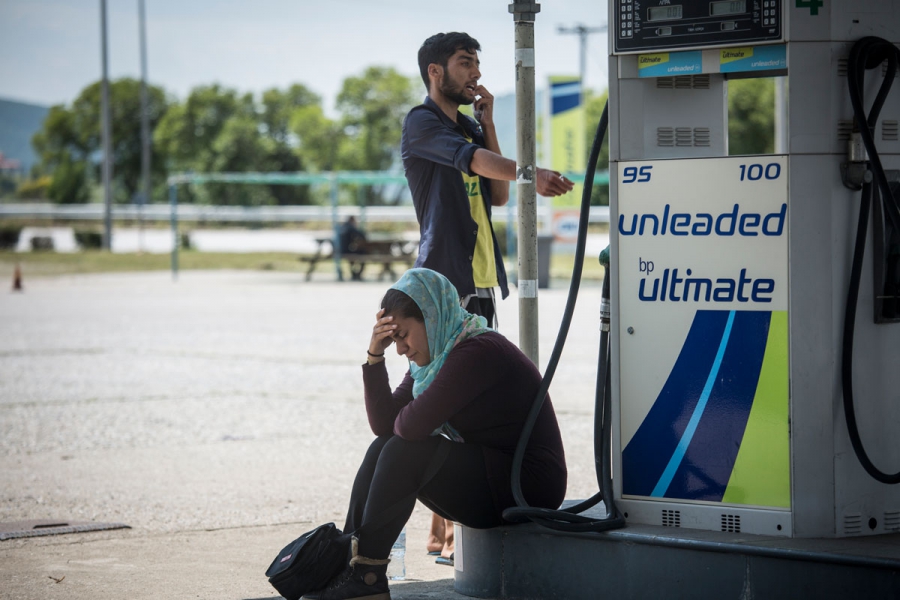 A woman cries at a gas station near Idomeni camp in Greece during Greek police operation to evacuate the camp.

By coincidence I was there when she was just arriving to Oraiokastro camp, a sea of canvas military tents set up inside an immense warehouse. Unlike Idomeni, these residents won’t get wet when it rains. But it was an unnatural, sterile space with minimal outdoor toilet and shower facilities and no presence of NGOs or volunteers.

Over the next few weeks Idomeni camp as it is known now will fade away. It will be emptied. But the trauma of this crisis, both for Greece and the refugees, will not be so easily healed. 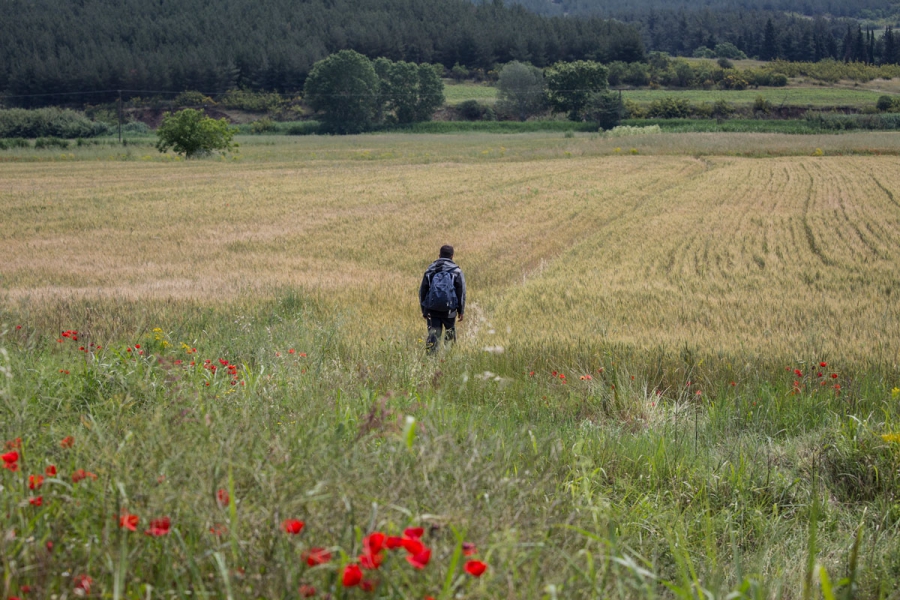 A refugee walks out of Idomeni during the Greek police operation to evacuate the camp. 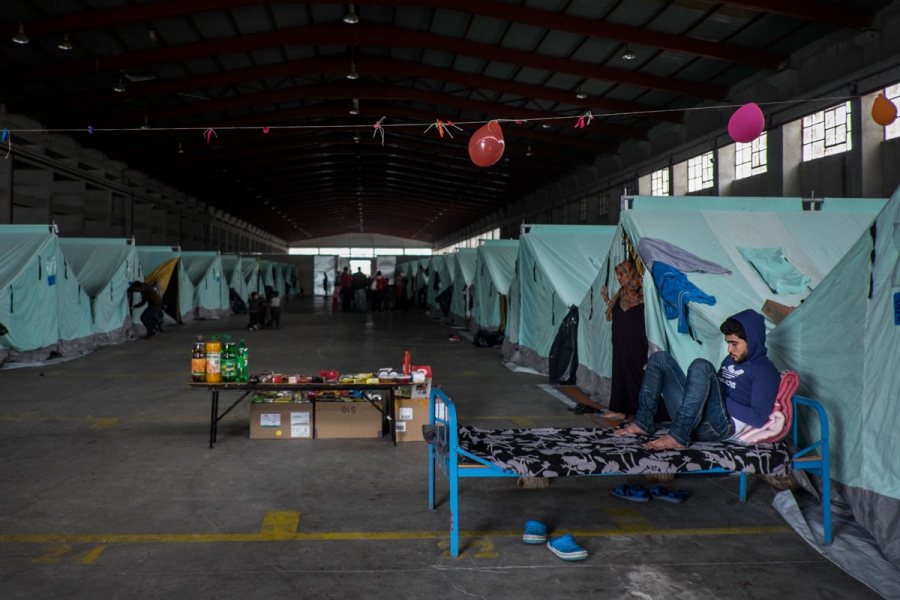 Oraikastro Camp, where many refugees were being moved during the evacuation of Idomeni.