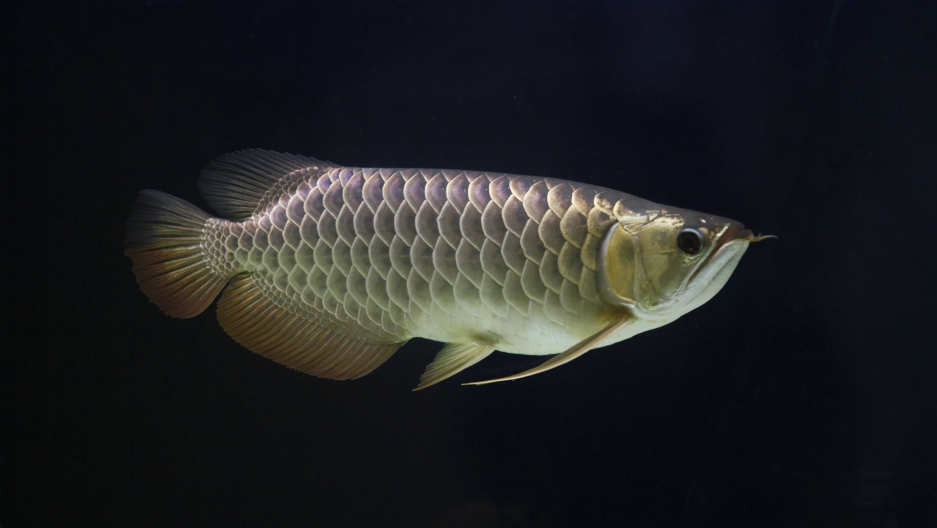 A Sapphire Golden Arowana, named "Long Zai" or "Little Dragon" in Cantonese, swims in its tank at its owner's residence in Kajang outside Kuala Lumpur March 5, 2012. Known for its agile body, sleek shiny scales and the "whiskers" that give it a resemblance to a Chinese dragon, demand for the fish is so high that some fetch up to $150,000.

People love having exotic fish in their aquariums. They'll pay big money for them, even when it's illegal. And it turns out that some people will kill for the right fish.

Author Emily Voigt descended into this crazy underworld for her new book, "The Dragon Behind the Glass: A True Story of Power, Obsession and the World's Most Coveted Fish," which tells the tale of what is perhaps the world's most sought-after aquarium fish: the Asian arowana.

Just how sought-after? One Asian arowana can fetch $150,000 or more. People have committed murder for them. Seriously. Designer-fish-related homicide is a real thing.

As you might guess, you can't find one at your local pet store if you live in the US — or at least you shouldn't be able to.

“If they have one, it’s a problem,” Voigt says. “The fish is banned in the United States. It is an endangered species. It’s protected by the US Endangered Species Act. So you can’t legally bring them into the United States as a pet. So if you find one, it might be a problem.”

The Asian arowana is no ordinary pet fish. It grows to about 3-feet long in the wild — "something the size of a snowshoe," Voigt says.

"It’s a fierce predator," she adds. "It’s also called the dragon fish because of its supposed resemblance to the Chinese dragon. It has large, round, coin-like scales. Two whiskers jut from its chin. And it undulates as it swims."

Collectors believe it brings prosperity and its popularity has nearly fished it out of its habitat. But it’s still being farmed in Southeast Asia — under tight security.

“That’s where the fish is raised, on farms that are likened to high-security prisons," Voigt says. "They have high concrete walls and barbed wire and Rottweilers prowling around the perimeters at night."

Voigt says the reason for all that protection is a spate of fish robberies in the last decade or so.

“There’s been kidnappings and fish-related canings and even murder,” she says.

What’s fascinating is that decades ago, people ate the Asian arowana for dinner. So what changed?

Voigt pegs it down to several factors: overharvesting for the food trade, habitat destruction, and the fish being a slow reproducer. The same thing could be said for a lot of species. But the Asian arowana also became a hot target for fish collectors when it appeared in the UN-administered Convention on the International Trade in Endangered Species of Wild Flora and Fauna in 1975. Its protected status made some people wanted to own it.

“There’s a desire to own a little piece of the wild," Voigt says.