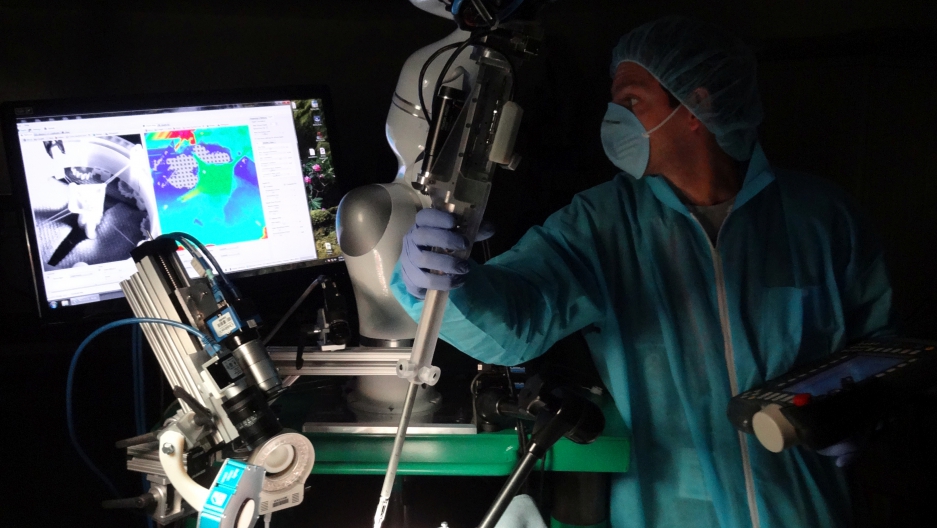 Researchers have now developed a robot that can make sutures and other delicate operations completely autonomously. Physician Peter Kim and his colleagues recently detailed their invention, which they call the Smart Tissue Autonomous Robot, in Science Translational Medicine.

“It is programmed by a surgeon, but it can accomplish a complex surgical task such as ... putting together two tubular structures — whether it be a blood vessel or intestine — autonomously and it will adjust itself, follow, and then provide sort of an optimal functional outcome,” Kim says.

Kim, who is vice president of the Sheikh Zayed Institute for Pediatric Surgical Innovation and associate surgeon-in-chief at the Children’s National Medical Center in Washington, DC, says he and his team have tested the robot surgeons on pigs. They even held a competition between the robots, and some of the world’s best surgeons.

“When we did the tests we compared it essentially by putting together a pig intestine done by this particular machine [while competing] against very experienced internationally known surgeons,” Kim says. “At the end we measured the quality of the anastomisis [surgery] — how are the gaps of stitching, how often they made mistakes. ... Ultimately in the functional outcome, as in whether or not it leaks under pressure and so on, the machine performed better.”

One of the advantages of using a robot to perform surgery is that it may be able to maneuver better in small spaces than human hands. Case in point: hysterectomies, where surgeons have to perform procedures in tiny pelvic cavities.

“At the end, you still have to close that little hole and because it's way down deep in a pelvis, the gynecologists will spend a long time trying to put a handful of sutures in there,” Kim says. “The leakage rate is fairly significant. ... When you have an autonomous machine, an intelligent machine like this, it can help your surgeon to do that when that sort of a task is at hand.”

At the moment, only proof-of-concept robot surgeons have been made, but eventually Kim wants to develop the technology for the machines to learn from the best surgeons in the world.

“My idea is that, if you can program the cumulative experience of all surgeons today and over history, then any time, if you have a smart machine like this, that would [be] the best practice available to you then. Just imagine — anywhere, any place in the world, if you need a particular procedure done, you’ll have the support of a history of surgical kind behind you.”

Kim says his goal is to get the robot into hospitals nationwide by keeping the price well below the cost of surgeon-assisted robots used today.

“The real value proposition here is that, if you can minimize complication — one complication where your risk of dying from it is three to 10 times higher — I mean that is really priceless and so that's the value proposition for society as well as the health care system, in addition to making the capital cost of the machine much lower. Our idea of robotic surgery is not that the whole thing should be done by a robot from beginning to end ... but robots should come in a time and in a place where it does its function best and then put it away and then rest of that can be done by human beings,” Kim says. “If you have a technology, whether it be autonomous or non-autonomous, and they say it improves your chances of having a successful outcome and minimizes complications, why wouldn't you as a patient or a loved one not want to have it?”