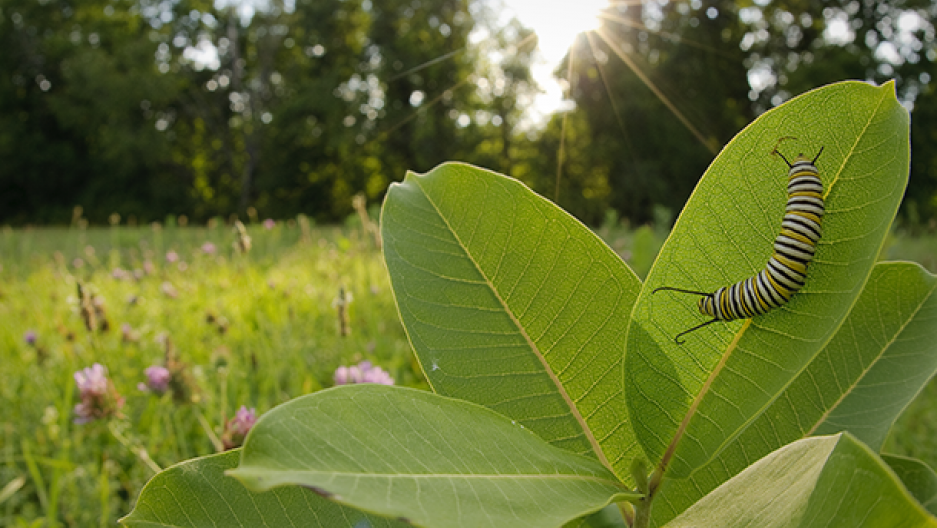 A monarch caterpillar on a milkweed leaf. A new study suggests that the monarch butterfly's population decline is a more complex and thorny problem than just lack of food.
Credit:

A new study questions the conventional wisdom about the roles of pesticides and milkweed in the decline of the monarch butterfly population.

The past decade has seen a steep decline in the monarch butterfly population and to help save it, many people have focused on protecting milkweed, the primary source of food for monarch caterpillars across North America.

But according to a team of researchers led by the Anurag Agrawal, a professor of ecology and evolutionary biology at Cornell University, saving the monarch will require more than just planting milkweed.

While it’s true that milkweed has been declining in the US and it seems logical that its absence could be playing a role in the downward spiral of the monarch butterfly, Agrawal wondered if the butterfly could be encountering problems at other points in its complex annual migratory cycle. So he felt compelled, he says, to take a more rigorous look at the data.

In the fall, monarchs migrate all the way down to Mexico, where they rest for four months before flying back to the US. They lay eggs in Texas and Oklahoma, and from there the offspring fly northward to the US Midwest, the northeastern US and southern Canada, where they breed for two to three more generations.

Fortunately, Agrawal says, citizen scientists and conservation organizations have been tracking the monarch populations along their migratory path and helped provide the researchers with important data.

“People had the foresight 25 years ago to start these monitoring programs,” Agrawal says. “By putting those different data sets together we were able to ask, ‘Where is the weak point in the annual migratory cycle? Where is it that they are doing the worst and can we then take that information and infer what the problem might be?’”

The next leg of their journey gave Agrawal’s team something of a surprise, however.

“When we look at the next several generations of each cycle, in the Midwestern US, in the northeast and as they begin to fly south in the fall, none of those independent data sets show any population decline over the past 22 years,” Agrawal says.

This suggests that the monarch populations are actually building up each summer, during the only time when they rely on milkweed. At the end of this period, when they are done eating milkweed, their populations over the past 22 years seem to be somewhat stable, Agrawal says.

But then they begin their southern flight, and by the time they get to Mexico, the numbers are down again.

“On the one hand, that presents a very important finding: The decline seems to happen after they're done feeding on milkweed,” Agrawal says. “It also presents the conundrum: Why is it that their numbers are down when they get to Mexico, given that they weren't down in the beginning of the fall?”

It would appear, then, that the problem has to do with the monarchs being able to complete their flight successfully and to establish in Mexico, Agrawal says.

Agrawal sees one of three potential problems: First, monarchs need flower nectar to power their flight to Mexico and some research suggests a decline in the amount of flowers available to them during their journey. If that's the case, the monarchs would not have enough energy to make it all the way to Mexico.

Secondly, while flying these tremendous distances, the butterflies need the landscapes to be free of obstructions, insecticides and other hazards. It very well may be that they're not finding clean and healthy landscapes during their migration, Agrawal says.

Lastly, the monarch’s overwintering grounds in Mexico are quite small, limited to about a dozen mountaintops encompassing an area about the size of New York City. Hundreds of millions of monarch butterflies overwinter in the trees of these few, special mountaintops and those forests have been degraded over time by logging and other human activities.

“It's been very difficult to pinpoint the impact of that forest degradation on the monarchs, but it's quite clear that it is substantial, and despite the best efforts to reduce logging and other activities, some of it continues,” Agrawal says. “So I think it's the flower resources available, the lack of uninterrupted and clean landscapes and the [degraded] overwintering forests that may all be contributing to their decline.”

If milkweed loss is contributing, it's doing so in a complex, but limited way, Agrawal concludes.

“If we were to look across the 22 years that we have data and [look for] a signal that reduced host plant alone is important for these butterflies, that signal does not exist. And I'd say its remarkably consistent across several different data sets.”

But don’t stop planting milkweed, Agrawal says. Just be sure it’s the native variety. And don’t expect any miracles. This is a complex problem to which there are no simple solutions.