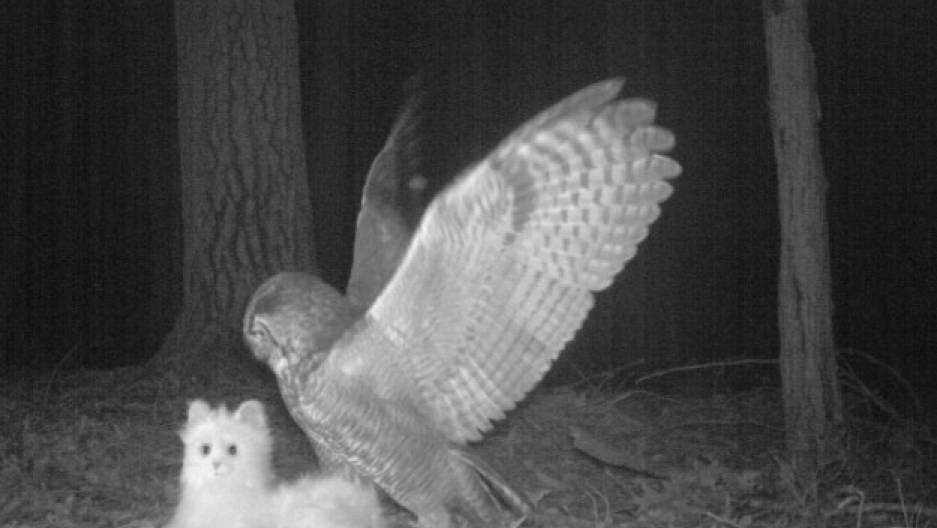 Researchers planted this camera trap (complete with robotic toy cat) in order to study what local species prey on cats. Here, a great horned owl takes the bait. The cat was found not far away, mostly intact, suggesting that the owl probably discovered the ruse after its first bite. Image by Roland Kays, courtesy of "Candid Creatures: How Camera Traps Reveal the Mysteries of Nature, by Roland Kays (May 15, 2016 John Hopkins University Press)

Scientists trying to learn about the lifestyles of elusive critters (tigers and cougars come to mind) have their work cut out for them.

Many animals will smell or hear a researcher long before the researcher sees them. As for observing nocturnal animals? Forget it. But in the last few years, many wildlife researchers studying animals in their natural habitat have had a technological assist from camera traps. These devices lie in wait until a passing animal triggers their motion sensor.

Then, click! — a candid shot of a creature in the wild.

“It's pretty simple really,” says zoologist Roland Kays. “It's a motion sensor and a camera and whenever, usually it's a warm-blooded animal that will trigger the motion sensor, the camera will start taking pictures and these days it can take video. And they typically will have an infrared flash so that, if it's at night which is when, you know, really most animals are out moving around, they usually don't even really notice it's there. That’s why you get the black and white images at night but it doesn't blind them like a white flash might.”

Kays recently compiled a “best of” selection of camera-trap photos from 152 scientists around the world for his book ‘Candid Creatures: How Camera Traps Reveal the Mysteries of Nature.’ The photos reveal unusually compelling, intimate and candid views of animals living in their natural habitat.

Kays, however, says a camera trap is not new.

“It goes back a long way actually — over 100 years,” Kays says. “Back when it was, you know, big old cameras with sort of glass plates on these giant tripods and giant cakes of magnesium powder and you couldn't sneak up on an animal with one of those in your hand. But people would leave them and then just tie a string to a piece of bait to the trigger, and that's how they got the first camera trap pictures.

"People were so struck by these … actually the first wildlife pictures ever printed in National Geographic magazine came from a camera trap.”

The zoologist says there’s more to camera traps than getting good photos of animals, however. The instruments are also used as tools to study wildlife.

“All the animals … all around the world are dealing with increasing human presence,” Kays says. “Some animals like these red foxes actually do pretty well around people, but a lot of other species don't.

"We're talking about, you know, rhinos and tigers and jaguars and some of these big animals that it's almost impossible to see these guys with their own eyes. So if we want to understand where they're surviving, where they're doing well, where they're doing poorly and try to find solutions for how they can, you know, how humans can figure out a way to co-exist on the planet with these animals. We need this type of information and camera traps are great for delivering what animal lives where and then as a bonus you get these beautiful pictures.”

Camera traps have also helped scientists observe never-before-seen behavior from wildlife. In one study in Costa Rica, scientists caught sight of a tayra — a large weasel-like animal — running around with a bitter unripe plantain in its mouth. Since unripe plantains are considered inedible, they wanted to know why a tayra would want one. So they set a camera trap and eventually caught photos of the tayra picking unripe plantains and hiding them under leaves to eat later.

“It was basically taking these so that the monkeys wouldn't get it later and hiding it,” Kays says. “It's an amazing amount of foresight for a wild animal like this to to realize … to make this plan and execute it. And it was caught in the act with a camera trap.”