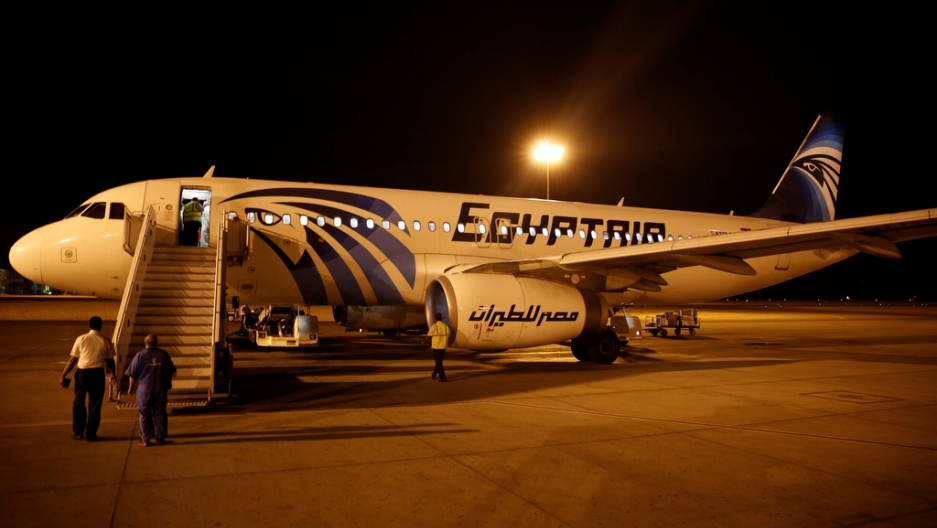 Airport security check an EgyptAir plane after it arrived from Cairo to Luxor International Airport, Egypt, on May 19, 2016.
Credit: Amr Abdallah Dalsh
Share

A European Space Agency satellite has spotted a possible oil slick near the site where a missing EgyptAir plane is believed to have crashed with 66 people on board, ESA said Friday.

"According to the satellite image, the slick ... was about 40 kilometres (25 miles) southeast of the last known location of the aircraft. The slick is about two kilometres long," the Netherlands-based ESA said in a statement.

Search teams are scouring the Mediterranean for the remains of the Airbus A320 that suddenly disappeared from radar on Thursday on a routine flight between Paris and Cairo.

"Since the plane disappeared, ESA and experts have been scrutinising satellite data to see if anything could be found to indicate wreckage of oil floating on the sea," ESA said.

A second image taken Friday showed that the slick drifted by about 5 kilometers (3 miles).

"There is however no guarantee that the slick is from the missing aircraft," ESA stressed.

The news came after Greek officials said that a body part, seats and some items of luggage were found Friday off the coast of Alexandria.

The Sentinel-2A satellite will pass over the area on Sunday after which space experts will continue to study images.

Both satellites were launched as part of Europe's environmental monitoring Copernicus program.

The latest air tragedy raised fears that the plane may have fallen victim to a terror attack, after the bombing of a Russian passenger jet by the Islamic State jihadist group over Egypt in October that killed all 224 people on board.

EgyptAir had prematurely announced on Thursday that wreckage from the plane had been found floating at sea off the island of Karpathos, northeast of Crete, only to backtrack after Greece denied any debris had been found.

The plane disappeared between Karpathos and the Egyptian coast in the early hours of Thursday morning, without its crew sending a distress signal.