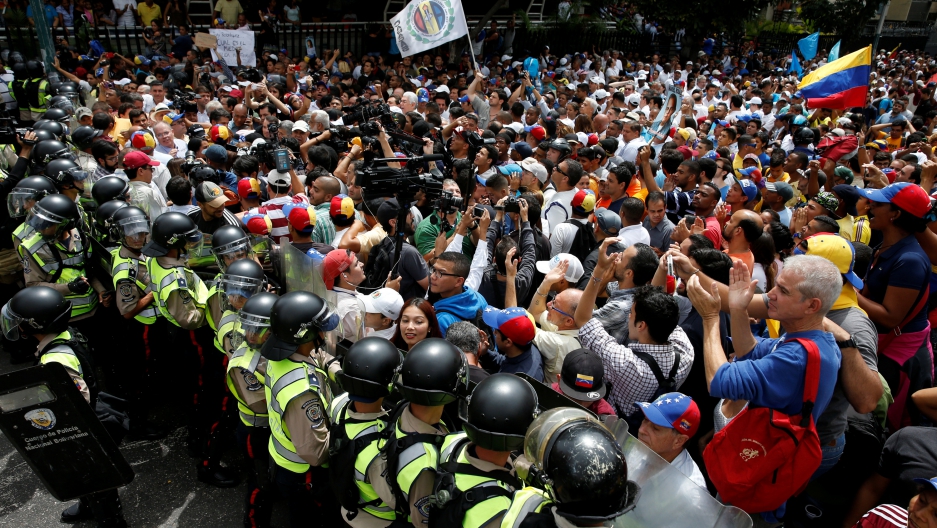 Opposition supporters clash with riot policemen during a rally to demand a referendum to remove President Nicolas Maduro in Caracas, Venezuela, on May 18, 2016.
Credit: Carlos Garcia Rawlins
Share

It was around noon when a food truck rolled up to a Venezuelan state-subsidized supermarket in the town of Guarenas just east of the capital.

But, to the fury of the long line of people waiting out front, the cargo wasn't unloaded. Instead soldiers took it away.

"We want food!" the crowd roared in protest, to no avail. Some tried to run after the truck.

Under the state of emergency imposed by President Nicolas Maduro, the military, along with government-organized civilian committees, ensures that food packets are delivered door-to-door in order to — as officials say — cut out black market operators.

Haydee Teran, a 48-year-old housewife who had been lining up for hours at the supermarket hoping to buy some scarce essentials, said Guarenas officials ordered that half of the food deliveries heading to shops and markets be instead diverted for local distribution.

"This decree isn't solving anything," Teran told AFP, showing a video of the incident she posted on Twitter.

"What the people want is food. There hasn't been looting, but we are closing the streets to protest," she said.

Yanina Diaz, a friend waiting with Teran in front of a bakery, said authorities were especially on guard over events in Guarenas. The town was among the first to see violence in riots that broke out in Venezuela in 1989 over a gasoline price hike.

Many frustrated Venezuelans blame the government for the hardship they are enduring.

The president however says he is fighting an "economic war" being waged by Venezuela's "fascist" right supported by the "imperialist" United States.

Since Maduro decreed the state of emergency, political tensions in the country have ratcheted up.

The opposition, which controls the National Assembly and is aiming to oust the president through a recall referendum, was leading nationwide protests on Wednesday.

But in the ever-longer lines in front of many supermarkets, the mood was of resignation and criticism of Maduro.

"What is he going to do with the emergency decree? What he needs to do is get food in," said Migdalia Lopez, 51.

She had been in the street protesting, but had to take a break to line up and wait to buy bread.

Unlike Teran and Diaz, Lopez described herself as a former partisan of the socialist "revolution" started by late leader Hugo Chavez and continued by Maduro.

"Here in Guarenas there were revolutionary supporters. But now the people no longer want revolution -- what they want is food," she said.

"The people are going hungry. We are tired of lining up, of killing ourselves for just a carton of eggs or some bread," she said.

The path the Venezuelan government has taken promises no respite.

Although blessed with the biggest proven oil reserves in the world, the South American nation is becoming an economic wasteland.

Uncontrolled inflation is decimating the value of local bolivares every day. After climbing to 180 percent in 2015, this year inflation is expected to soar to as much as 700 percent, the highest on the planet.

The government insists on an official exchange rate of 10 bolivares per dollar. But the black market rate — the one companies use to buy and sell goods — is 1,000 per dollar.

Some incidents of looting have been reported around Venezuela, but most people are enduring the spiral into chaos with bitterness.

Protests mostly take the form of blocking roads and spreading videos and photos of discontent online.

The head of the Venezuelan Observatory for Social Conflict, Marco Ponce, told AFP that his non-governmental organization had counted 107 instances of looting and attempted looting in the first three months of the year. There have been hundreds of small street protests, he said.

Seventy percent of Venezuelans want a change of government, according to a poll by the firm Datanalisis.

Lopez is among them, but she doesn't want to see current opposition figures take over, remembering some of them as greedy and arrogant when they held the reins before Chavez's rule.

"It's best that others step in to govern — but not those squalid bastards, not them either," she said.

A man in line yells out sardonically that "the socialist bread is coming," provoking a ripple of comments and grumbles from others in the long bread line.