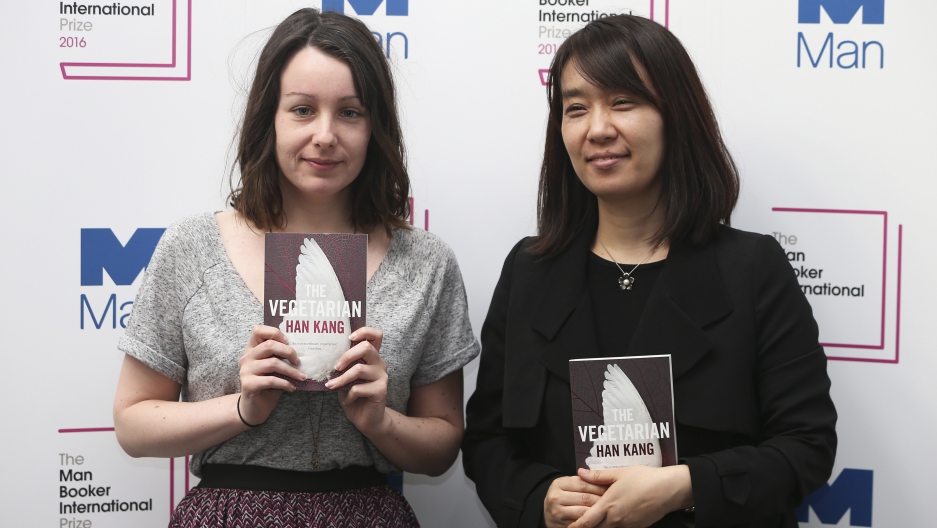 Nominated translator Deborah Smith (L) and author Han Kang pose with their novel "The Vegetarian", during a media event for the Man Booker International Prize 2016, in London, Britain May 15, 2016.

The Man Booker International Prize for Fiction came out this week, and South Korean writer Han Kang got the brass ring for her novel "The Vegetarian."

But the thing many people are talking about isn't the book itself. It's the translator.

Deborah Smith, the 28-year-old Brit behind the novel's masterful translation to English, only started learning Korean six years ago. So how did she manage to interpret the book so well?

"If you're asking for the secret, I'm afraid I'm as ignorant as you are," she says. "Looking back now it feels like I must have looked up almost every other word in the dictionary. That's probably an exaggeration, but that's what it felt like at the time. It was a bit like climbing a mountain."

She says her newness to Korean was actually a boon. "I really knew that I needed to double-check everything and be extra careful," she says. "I also had to question the dictionary translations of certain terms."

Plus, with literature, direct translations don't always work best. "Just because it's the literal equivalent doesn't mean it's the right word to use if you are aiming for some kind of literary effect," she says.

A Korean friend also provided Smith with help. Smith says she imposed many an annoying question upon this friend, a fellow student in a PhD program. (In exchange for help with the translations, Smith would proofread all of her friend's coursework.)

The book's prose holds up in English, but it also passes a much harder test: Smith says that people who speak both fluent Korean and English cannot tell that a non-native speaker did the translation. "Nobody has really commented on that from having read it," she says. "People certainly talk about it from hearing my story from other channels. But the strength of the translation and the skill of a literary translation is how well you know the target language, not really how well you know the source language."

The key, according to Smith, was really knowing English and how to use it to recreate the Korean novel's style and voice. For that skill, she is overqualified. She reads about 200 books a year. "And I have so for as long as I remember," she says. "So on that end, I was pretty confident."

"The Vegetarian" was unlike any other book Smith had read, and she was the one who approached a publisher back in 2013 about doing a translation. "I think it's one of those books where you can really see what is exciting about contemporary Korean literature. It is quite distinctive from a lot of other countries' [literature]," she says.

And that's the big reason she chose to tackle a project in a language she spoke imperfectly. "I think that is kind of the point of translation, to make something available in a language or a culture that is new and that wasn't there before."

Check out an excerpt of "The Vegetarian" here: