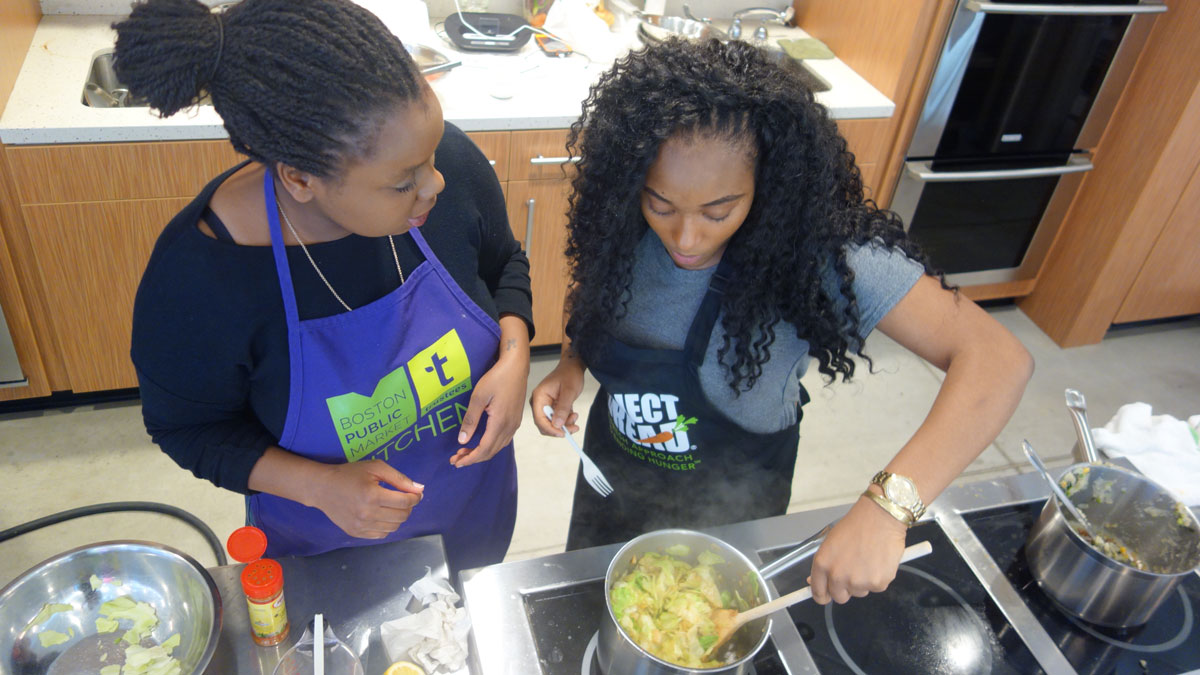 As a kid growing up in the Democratic Republic of Congo, Leonard Tshitenge loved to eat bitekuteku — a Congolese dish based on vegetables and spinach. But now he lives in Brockton, Massachusetts, where his two kids are all about chicken nuggets and fries. Especially his son, who’s a picky eater.

So Leonard got an idea.

He and his wife Felicia, who’s from Nigeria, volunteered to teach African American communities, and anyone else who might be interested, about how to eat like they did back home.

I met him at the Boston Public Market, an upscale venue for local farmers and food entrepreneurs. And it feels a lot like a family has crowded the kitchen at home, to cook a holiday meal. Men and women are poring over cookbooks, squeezing by each other with pots and pans. Felicia oversees a Senegalese sweet potato peanut stew, bubbling on the stove. She adds some diced tomatoes, and shovels chopped carrots and zucchini into some sizzling oil. 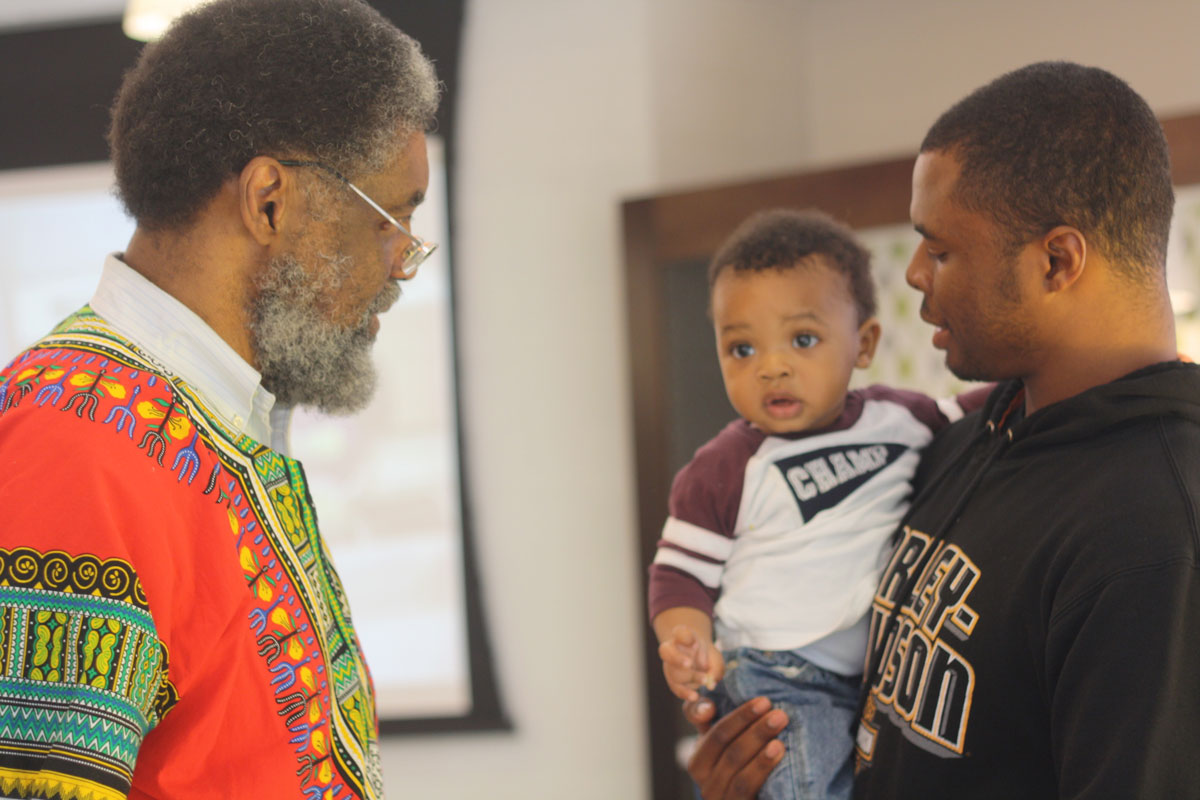 Brandon Ransom and his 10 month old.

Brandon Ransom brought his 10 month old, eager to introduce the little guy to okra. Ransom is a nutritionist who’s African American — and is tired of hearing about the benefits of a Mediterranean diet.

“There are alternative foods that other cultures have historically eaten that could be slightly shifted, for a whole different perspective of what is healthy and what is nutritious," he says.

Like collard greens, for example. Leave out the ham hocks. Or make yucca fries, instead of French fries. And the class is introduced to a different kind of food pyramid — one that’s filled with foods native to Africa — like mustard greens, tubers and peanuts. There’s just a tiny slice of sweet potato pie, at the very top, in the “sometimes only” category.

But for all this talk of getting back to roots, class instructor Chioma Woko notes that some of her family in Nigeria, they’re starting to eat more like Americans, too.

“They definitely are eating more processed food because of globalization,” she says. “There’s a lot of fast food in Nigeria, but it is still a thing of relative wealth. Like not everyone has access to that type of food, because it costs money to eat that way.”

But the opposite is true in America. And those who’ve come to the class — the academics, activists and other leaders in the African American community here — they say that learning a few new recipes isn’t enough.

Food insecurity is a reality for many, who are working multiple jobs and living hurried urban lives. In some neighborhoods, there aren’t even supermarkets, so picking up fast food is easier — and cheaper — than cooking something fresh. Still others are choosing between buying fresh vegetables and paying for things like electricity or prescription medications. 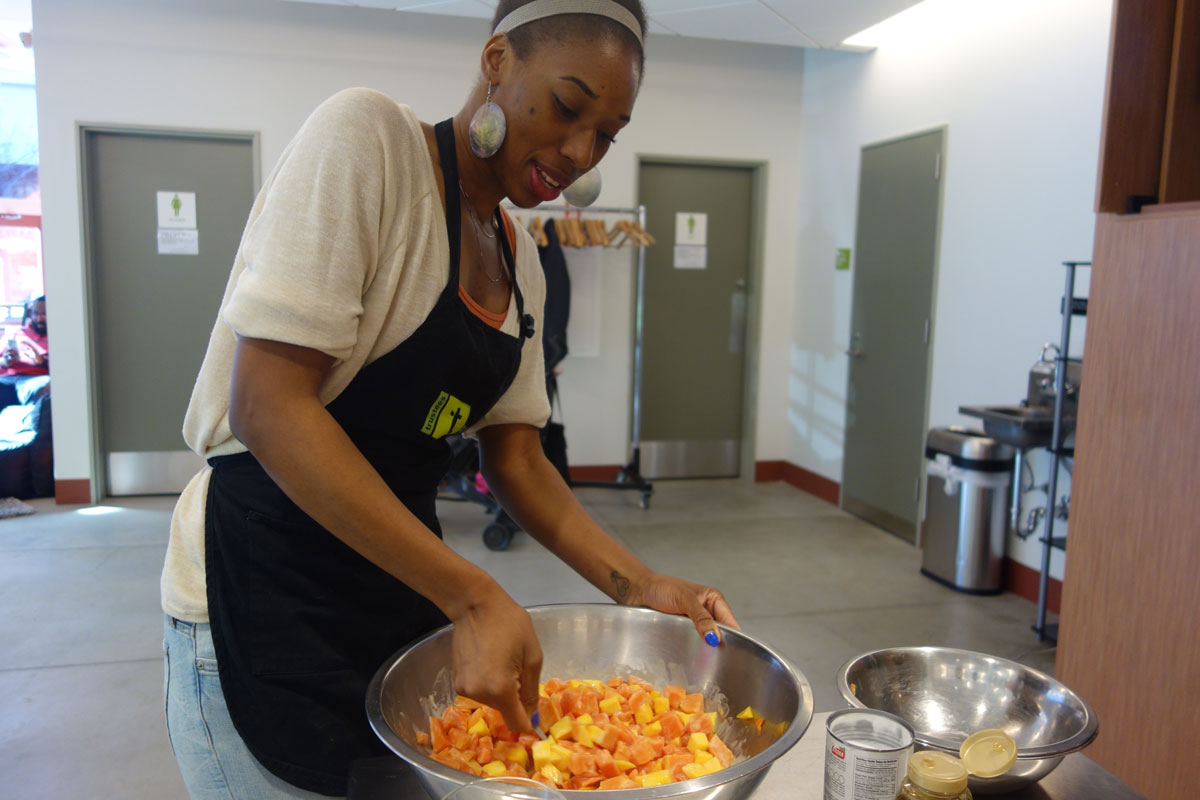 A student stirs up a mango and papaya fruit salad — a West African dessert with bits of coconut, peanuts and honey.

So community leaders brainstorm ideas for where to bring the class — which uses a curriculum by the non-profit called Oldways — next. They suggest places like community centers and churches in their neighborhoods.

And even Leonard admits it isn’t easy. He’s prone to picking up a $4 meal at Wendy’s every now and then, too. He shares, “So I don’t want to make it like, hey I’m perfect. No, I think that it’s a struggle. We are struggling in this together, and motivating each other.”

The final course is a mango and papaya fruit salad — a West African dessert with bits of coconut, peanuts and honey. Tess Browne, who’s 70, says it brings back memories of growing up in Trinidad and Tobago.

“I mean all of this food it’s so much like the things I grew up with, the root vegetables and the rice," she says. "And well, even today’s dessert.”

These days though, she confesses to eating mostly takeout and some microwaveable meals. But she says the class has inspired her to change her ways, “I know I got good genes from my mom. She passed at 93, but she had more discipline than I do though, in how she ate and so … so I’ll try to do that.”