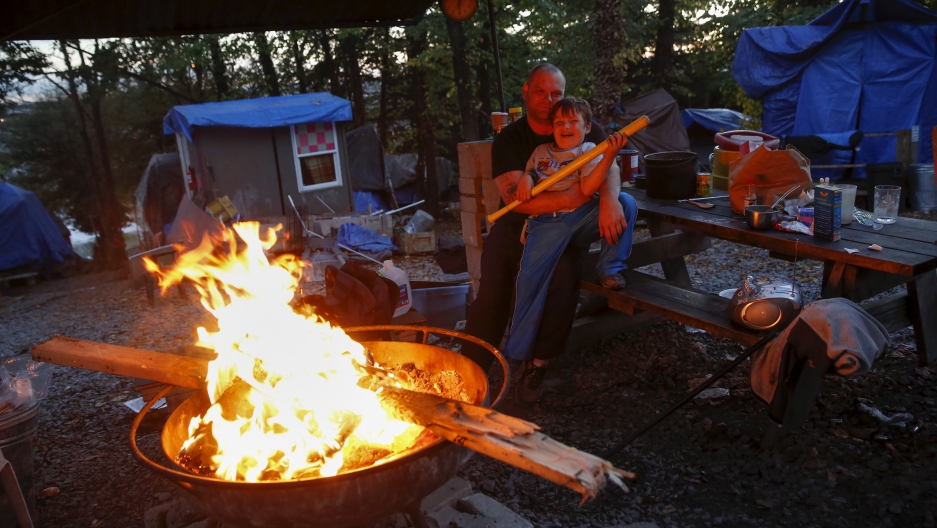 Matt Hannahs, 32, poses with his son Devin outside their tent by a wood fire at Nickelsville homeless tent encampment in Seattle, Washington October 13, 2015. "Devin doesn't view this as a negative thing, I mean being a little boy and resilient he looks at it as an adventure. Just meeting new people and seeing new things its basically like camping," Hannahs said.

Housing affordability and availability in big cities like New York and San Francisco are often viewed as issues of the working, middle and upper classes. But there is an entirely separate portion of urban population that gets left out.

A report from the US Conference of Mayors shows that homelessness is on the rise in America's biggest cities. Demands for emergency food assistance are going unmet, and housing facilities are turning away the needy.

In Seattle, around 400 people are living in a large homeless encampment called "The Jungle" under Interstate 5. Kara Bernstine is one of them.

“I mean this is the kitchen. ... On the other side is where we have the food in all the coolers," she pointed out. "And then you see the fire pit, there's usually always a fire going which provides not only warmth, but it's where we cook. So everything's like a barbecue."

At one point, she called out to a cat she has named "Meow Meow." McNichols asked why she had the animal.

"Keeps the rats away," Berstine said with a laugh. "She's been sleeping in my tent and I swear I haven't had a single rat around my tent, they must smell her or something. 'Cause rats terrify me. I've had the unfortunate [luck] of opening my tent late at night and there being a rat, but not with Meow Meow."

Robert Patterson also lives in "The Jungle" in Seattle. In an audio diary he recorded for KUOW, Patterson recounts the night his daughter aged out of the foster system and had to sleep with him and his wife outside.

“She came to us and she had nowhere to go," he says. "We tried to take her to a teenage shelter, but it was too late. And Carmen and I were living in a doorway in downtown Seattle. And she had to come and stay with us for a night in that doorway."

In Florida, new state rules say childless adults must work to receive monthly assistance like food stamps. That has hurt homeless people like Lucy Perry of Miami, who hasn't worked since she was 21, when panic attacks and anxiety forced her to give up her job as a fast-food cook. She has since been diagnosed with schizophrenia and other disabling conditions.

"Now I'm having to go out here and ask people for help just to eat. And that's embarrassing as hell," she told WLRN. "I hate it. I hate being out here."

Some people are able to get help from the government. In Washington, DC, 60-year-old Miguel Elerson was able to use city money to get an apartment. He'd been on the streets for three years.

“There's no words to describe it. It's like going from nothing to almost something. Now that I'm here I can see actually getting my life back together," he told WAMU.

Others were able to find a home on their own. In December, the Rosenheim family finally found an apartment after spending the last three years living out of hotels in North Texas. Father Dave Rosenheim told KERA that it was tough raising his three children in those hotels.

“Lots of drugs. Lots of stealing and theft and making a living not necessarily in an honest way. And that goes on and on and on,” he said.

Most people are not so lucky. Perry Foster was living on the streets of San Francisco in a tent encampment in the city's SOMA neighborhood when he talked to KALW in March. But he said he was determined not to let that tent be his fate.

“This is not life. No this is not what I want the rest of my life to be. This is just a momentary blip so with that being said I'm not out here for the long run. None of us are. None of us want to be out here."