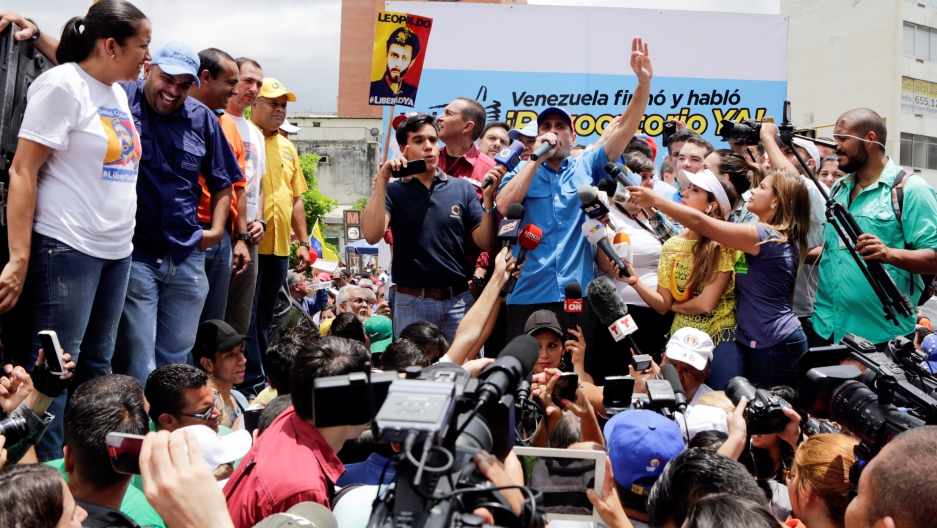 Venezuelan opposition leader and Governor of Miranda state Henrique Capriles (C) speaks during a rally to demand a referendum to remove President Nicolás Maduro in Caracas, Venezuela, May 14, 2016.

For the last three years, Venezuela has been in the throes of an economic crisis, and things have reached a boiling point. Over the weekend, President Nicolás Maduro declared a 60-day state of emergency, claiming there were plots from within Venezuela and from the United States to undermine his authority.

Observers say the president initiated the state of emergency to thwart calls for a recall referendum.

President Maduro says military exercises will begin this week in response to "trouble makers" in the country, and he's also planning to seize closed factories and arrest employees. Venezuela is experiencing product shortages, high inflation and the country has seen an increase in violent crime.

Ricardo Hausmann, a Venezuelan, a professor at the Harvard Kennedy School of Government, and director of the Harvard Center for International Development, says that those inside and out of Caracas claim that the nation is headed for collapse.

“Venezuela's problems are a consequence of the craziest economic policy ever in a country or in the world,” he says. “It’s a country that has gone through its longest and highest oil boom in its history, and ended that period over-indebted, with a destroyed productive capacity, and now it cannot face the reduction in the price of oil.”

The global oil industry is struggling — prices have hit a 10-year low and hover around $45 a barrel, which has disrupted energy markets in the Middle East, the United States, Africa and Latin and South America.  For unstable governments, the results have been disastrous.

“[Venezuela] has no access to international financial markets to borrow, it has no reserves left. It has a crazy system of controls that has led to rationing, and shortages and long lines,” says Hausmann.

The Venezuelan healthcare system is also in a state of extreme turmoil. Infants are dying at an alarming rate, fundamental drugs are not imported and hospitals and doctors are reporting that they have no gloves, water or soap to perform basic procedures.

“The country is now living its worst year from an economic and a social point of view, and [there’s] a humanitarian crisis that is being hidden away by a lack of information,” Hausmann says.

Since Maduro has only been in office for about three years, some argue that Hugo Chávez, who was president from 1999 to 2013, is largely to blame for this crisis.

“Hugo Chávez, in his last year in government, had the price of oil at $104 [per barrel], but he spent as if the price of oil was at $197, and he borrowed the difference," Hausmann says. "When Maduro came in, the markets said, ‘Chávez has borrowed so much money that you’re no longer eligible for loans.’ So that caused him to lose international finance, so he started printing money.”

Taken together, these factors have produced the perfect storm of economic, political and social upheaval. But Hausmann believes things would change if the opposition were able to recall President Maduro.

“I think that it’s very clear the direction in which the country would have to go,” he says. “It would have to re-establish basic market mechanisms and basic balances, but it would need massive international support. The government of Maduro doesn’t want to hear anything of international support, other than from China or maybe Belarus. But we are too big, and they are too small relative to the needs of the crisis.”

Many in Venezuela and South America associate strict austerity policies with economic manipulation from the United States, and from dictatorships of years passed. But Hausmann isn’t so sure.

Hausmann says austerity can work, especially in looking back at the governments of Argentina, Brazil, Mexico, Colombia, and Peru during the 1990s and early 2000s.

“[They] were able not only to stabilize the situation, bring inflation down, but also get re-elected with massive majorities,” he says. “I don’t buy the association of austerity and lack of democracy. Right now we have the worst of all possible things: We have a complete craziness and a lack of balance, mixed with the most authoritarian regime Venezuela has ever had.”