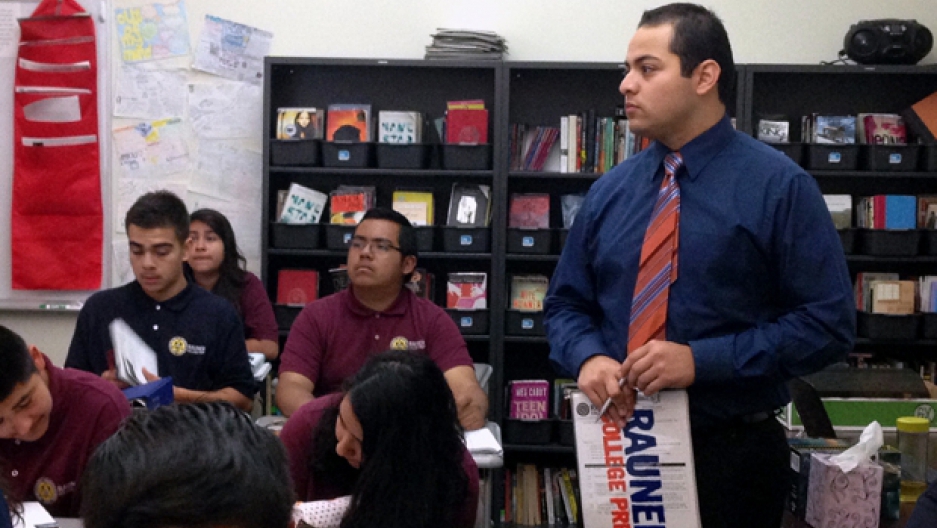 Jose Garcia was in the first graduating class at Chicago's Rauner College Prep. That was in 2010 and he's now back teaching there as part of a graduate program.

By 2024, students who are racial minorities will make up more than half of US classrooms. But minority teachers, if hiring continues at its current pace, will make up only 20.5 percent of the educator workforce. Even 100 years from now, if trends persist, teachers and students in this country will not have comparable levels of diversity.

This gloomy future was estimated based on new data from the US Department of Education report, “The State of Racial Diversity In the Educator Workforce”.

According to the report, the percentage of teachers of color in public elementary and secondary schools only grew five percentage points in 24 years; they were 13 percent of the workforce in 1988 and 18 percent in 2012. This translates into an annual growth rate of 0.2 percent.

If this trend continues, there would be only four teachers of color for every 10 in 2116.

The percentage of students of color in elementary and secondary public schools is growing at a much faster rate. The number of Latino, African American, and Asian students is projected to surpass the number of non-Hispanic whites for the first time in history, reaching 50.3 percent, in 2014. This number is estimated to rise to 54 percent by 2024, according to the National Center for Education Statistics.

More: How Jose Garcia became a teacher in Chicago

Broadly speaking, many studies point to the benefits of diversity to companies' performace. A study by McKinsey in 2012 of 180 publicly traded companies in France, Germany, the UK and the US found that companies with more diverse executive teams consistently achieved better financial performance.

In term of education, studies showed that diversity in the teaching workforce can create significant benefits to students and help to narrow the academic achievement gap between majority and minority students. Research conducted by the University of Arkansas and the University of Colorado examined data from more than 2.9 million Florida students from the 2001-02 school year through 2008-09 school year.

Teachers of the same race or ethnicity as their students can serve as positive role models and may be more inclined to hold high expectations for a student's potential. The study recommends aggressive recruiting of minority teachers to help improve the performance of minority students.

So one way of closing the gap is to rapidly increase the supply of teachers of color, but the Department of Education's report paints another bleak picture: There was a lower percentage of non-white students who pursue education-related undergraduate degrees than those who choose other fields of study. This means that even if higher education becomes more diverse, the pool of teachers won't necessarily follow suit.

Students of color were 38 percent of undergraduate campuses in 2012, but only 27 percent of students majoring in education were non-white. Although diversity has increased over time, the pace has been slow. Furthermore, graduation rates for bachelor’s degree student of colors who major in education are lower than that of white students. The average graduation rate, defined as completion of bachelor’s degree within six years, was 73 percent for all students majoring in education in 2009. For black and Hispanic students, the numbers dropped to 42 and 49 percent.

Alternative teacher preparation programs, mostly offered online for working individuals who already have a bachelor's degree, are found to be more diverse than traditional teacher preparation programs. In 2013, four out of every 10 students enrolled in such alternative programs not based at a higher learning institution were minority students. The Department of Education report also provides several examples of other types of programs that can help ease the gap.

Boston Public School's High School to Teacher Program, for example, identifies future teachers among high school students and provides them with mentors, college preparatory courses and tuition subsidies. Successful participants are also given teaching jobs. Nine out of every 10 participants are black or Latino, which helps Boston Public School to have 37 percent teachers of color in its teaching workforce.