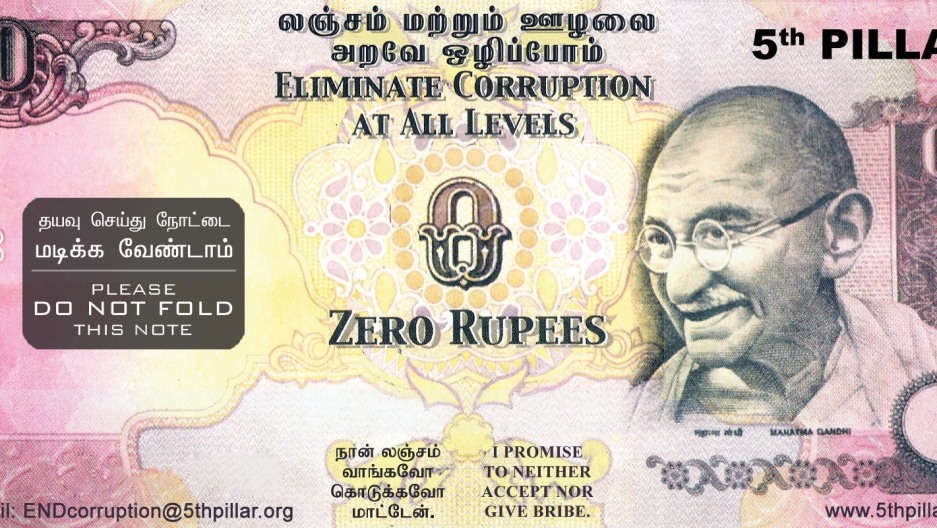 The key to the operation is a tool called the Zero Rupee note. This blatantly false, oversized purple bill, complete with Gandhi's portrait, can be handed to any officials who ask for a bribe in order to shame them into changing their behavior. The note communicates that not only will a person not pay a bribe, but also that they are not alone — they are part of a movement of people who support them in ending corruption.

“The Zero Rupee note is a very good weapon, it instills fear in corrupt officials and it forces them to be ashamed of what they are doing,” says Omesh Naturajan, a retired bus driver from the southern part of Tamil Nadu who decided to volunteer with 5th Pillar after the group helped him settle a land dispute. “I’ve issued around 5,000 notes in my district and used it in several departments." 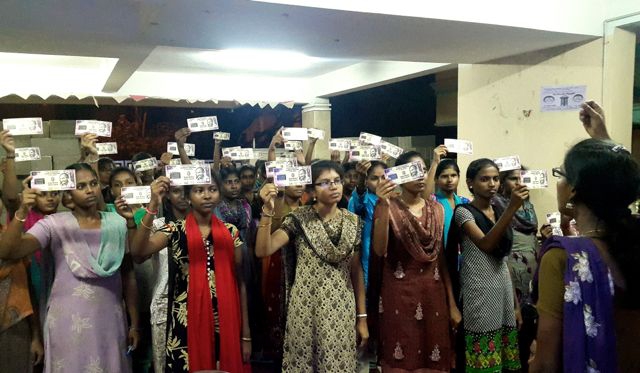 A group of women display Zero Rupee bills, a tool used to call out corrupt officials who ask for bribes.

The organization — whose name invokes the power of the people in a democracy — was founded in 2007 by Vijay Anand, an Indian engineer working in the US. Though 5th Pillar is nearly a decade old, the nonprofit, which is based in the southern city of Chennai, has only two small offices and just handful of full-time employees.

Lakshmi Gunashekar is one of them. She’s only 21, but she’s been running operations for three years at 5th Pillar, and is well versed in the tenets of nonviolent resistance.

“The most important piece of advice we give to anyone that comes to us is to not act violently or be rude or raise your voice at an official,” she says, adding that you have to stay firm about what you want and not leave until you accomplish your task.

Sometimes, this involves the Zero Rupee bill. The Zero Rupee note has grabbed the attention of many Indians as well as the attention of the international media. 5th Pillar estimates that 2.5 million notes have been distributed across the country in the last nine years. While the overall impact is difficult to quantify, Gunasekhar and the volunteers that work with her have countless first-hand anecdotes of its success.

"Since the day we've started distributing the note, we've had people call us saying that they got their job done without paying a bribe,” she says.

Not everyone, however, is convinced that so-called gimmicky campaigns like the Zero Rupee movement are cutting down on corruption in India.

"Of course it affects the general public at large, but it is not the biggest issue in our country right now, or ever for that matter,” says Isha Kandelwal, a young lawyer who fights for the rights of rural Indians. “And it can't be solved by just stopping bribery.”

But 5th Pillar’s Zero Rupee bills are just one strategy in the battle against corruption. The group also helps citizens draft Right To Information requests, designed to hold officials accountable to the people.

The Right To Information Act, a landmark bill that was enacted in 2005, mandates that citizens are entitled to request, and receive within 30 days, crucial information from public bodies, thereby pressuring authorities to conform to the law. Human rights activist Nikhil Dey is one of the reformers who successfully fought for the legislation.

“To me, why RTI is so powerful as a tool and as a movement is because it is not dependent on any organization,” Dey says. “It's people who are frustrated, angry. ... This is where the RTI is a fundamental change because it forces those in power to answer the most ordinary person.”

In India, this new crusade against corruption has been likened by some to a "second freedom struggle." It has become a hot topic, and the movement sparked massive protests in several cities in 2011. It even spawned a new political party, which won a landslide victory in the Delhi regional elections last year.

Like Gandhi, 5th Pillar relies on nonviolent methods, including RTIs and the more media-friendly shock tactics like the Zero Rupee campaign, to affect change. Though the organization is small, Dey says it’s contributing to a larger social movement.

“I think in that sense, people fighting corruption and the strength of an anti-corruption movement is growing,” he says. “And where organizations like 5th Pillar have a role to play is to try to connect and tie up these people to give them the little additional support they need.”