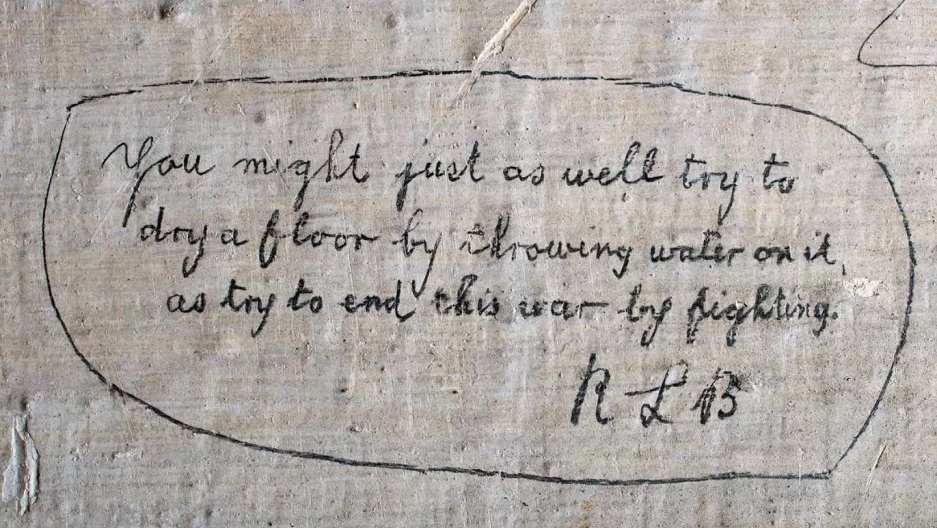 Graffiti on the walls of Richmond Castle in England. This inscription is by a socialist conscientious objector named Richard Lewis Barry. He describes what he saw to be the futility of fighting.

Richmond Castle has been standing since shortly after William the Conqueror invaded England in 1066.

Throughout its long history, the fortress in North Yorkshire has held a lot of prisoners. Surprisingly, it was still being used for this purpose as recently as 100 years ago, during World War I.

Conscientious objectors — people who refused to take part in the war on moral or religious grounds — were held in the castle's tiny cells.

And while they were there, they scratched messages of protest and pictures into its walls. A kind of World War I graffiti.

Since then, the castle walls have been crumbling away, threatening to erase those historical marks.

But now the structure is going to be saved, thanks to a grant of half a million dollars just approved to preserve the site. 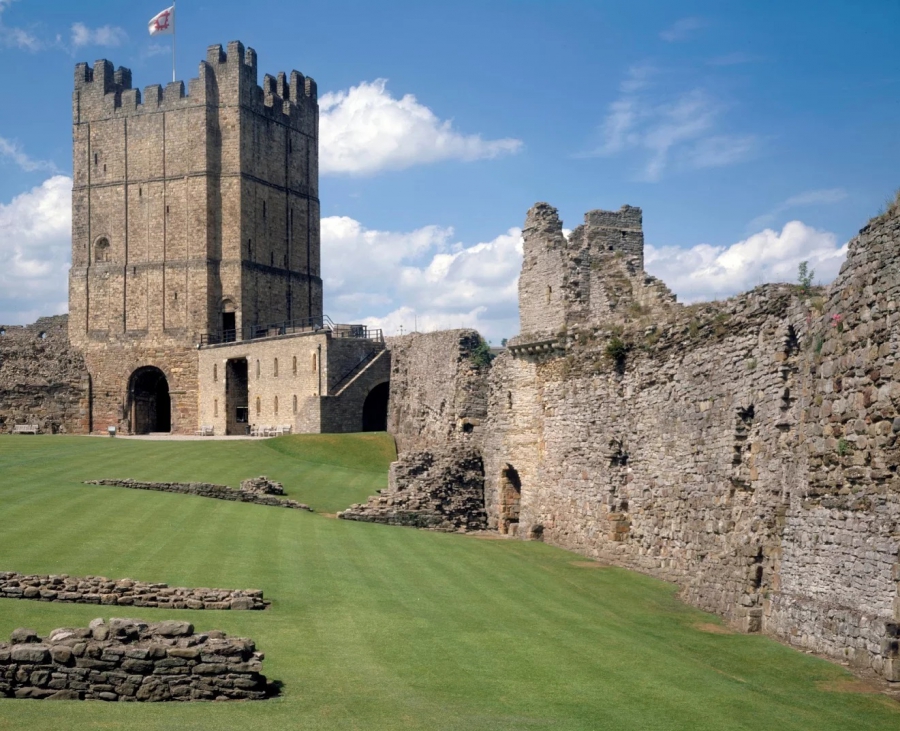 Richmond Castle, North Yorkshire. The cell block where conscientious objectors were imprisoned is at the foot of the tower.
Credit:

“There are literally thousands of pieces of graffiti,” said Megan Leyland from English Heritage, the charity leading the project.

“There’s a real variety of things etched, scratched and drawn with blunt pencils onto the walls,” she said. “The graffiti ranges from beautiful, delicate portraits … to political slogans and religious sentiments.” 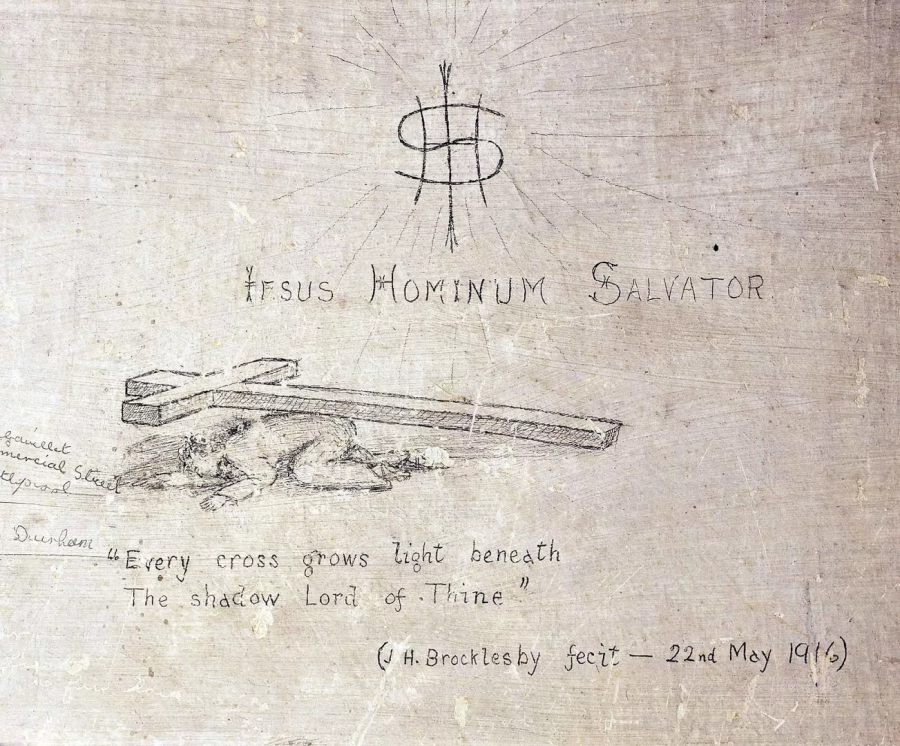 As well as featuring political messages, graffiti in the cell block features words taken from religious texts and hymns.

The identities of many of the graffiti artists remain unknown, but according to Leyland, some of the drawings were made by a group who came to be known as the "Richmond Sixteen."

Imprisoned in the castle for refusing to take part in the war effort, the group was then forcibly sent to France to carry out non-combat roles on the front.

When they continued to resist, they were sentenced to death by firing squad. But “in a dramatic scene, their sentences were reduced to 10 years of hard labor,” said Leyland.

“But they were willing to go all the way and face the ultimate deterrent. They would rather be killed than kill.” 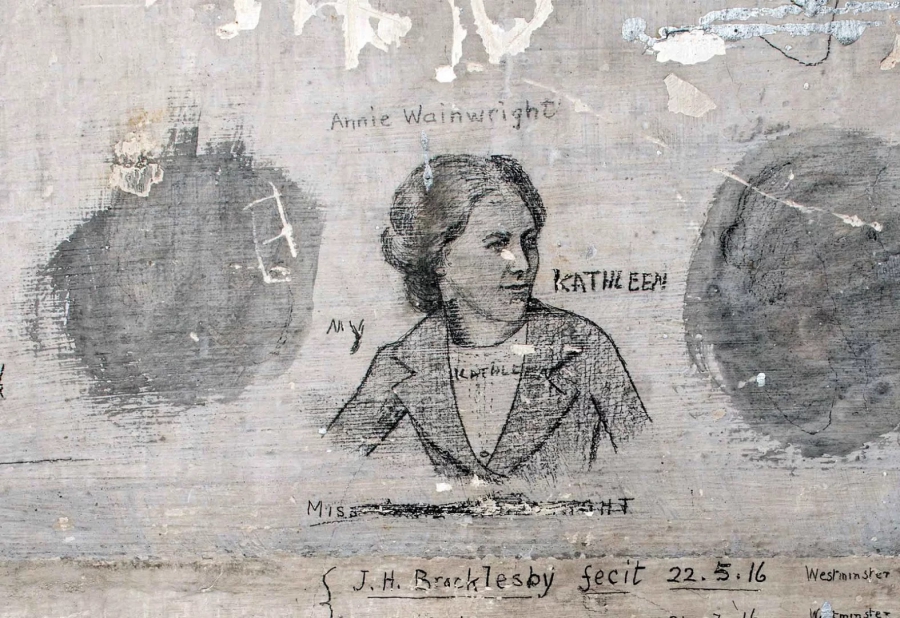 Bert Brocklesby, one of the so-called Richmond Sixteen, drew this delicate sketch of his fiancée, Annie Wainwright.

According to Leyland, the Richmond Sixteen contributed to a changing public attitude toward pacifism.

She says that preserving their stories at the Richmond Castle is “crucial.”

English Heritage will now start work on protecting the site. The main task will be to reduce the levels of dampness in the castle walls, which has led to the lime-wash surfaces flaking.

In the meantime, the charity will be putting up an online catalogue of images.

“This record is so unique,” said Leyland.

“It’s so important to recognize these different stories and voices from the time.” 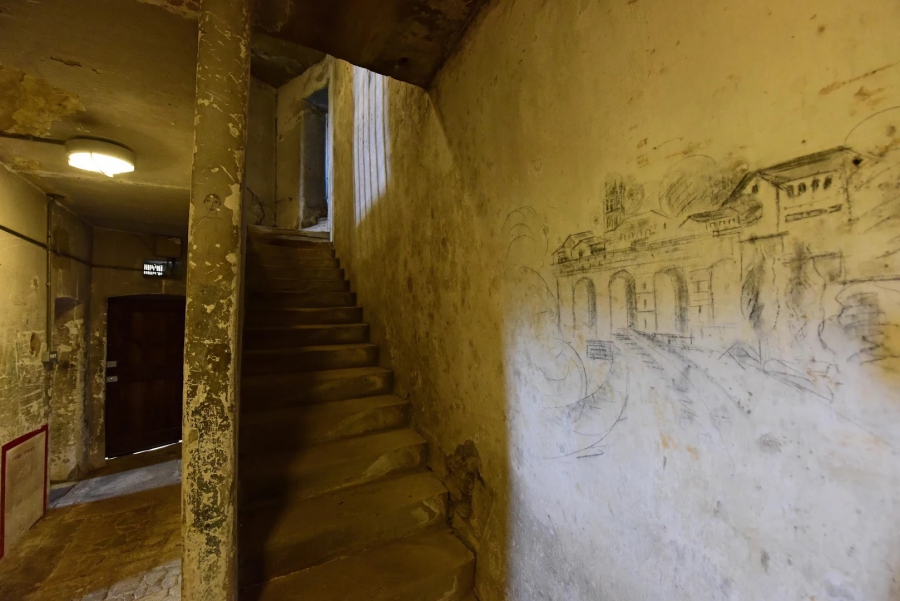 The cells of Richmond Castle, which have over 5,000 drawings on them, will now be preserved by English Heritage.