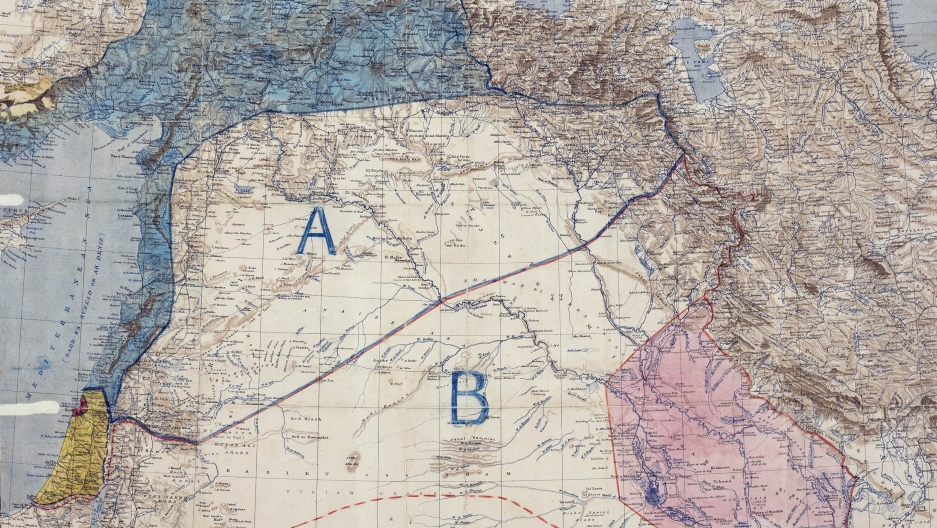 A secret wartime deal drawn up a century ago by two men — one British, one French — continues to reverberate through modern conflicts.

Named after the men who came up with it, the Sykes-Picot agreement divided up the Middle East between France and Britain. Sir Mark Sykes was appointed by the British government and François Georges-Picot by the French.

According to Robin Wright, who has written about this for The New Yorker, Sykes famously explained in 1915 that “I should like to draw a line from the ‘E’ in Acre [in what is now Israel] to the last ‘K’ in Kirkuk [in iraq].”

So the lines were drawn without much consideration for local identities and political preferences. At the time, the world was in the middle of World War I, and it was clear that the Ottoman Empire was about to collapse.

"Both the British and the French wanted to make sure that they created spheres of influence in which they could play a role in the modern Middle East and creating its future," explains Wright.

Wright points out, however, that Sykes' and Picot's map is not the Middle East we see today. Rather, it was the beginning of a process in defining what the region looked like that played out over years.

Eventually, the countries within the region became independent, leading to a tremendous period of instability.

"Between 1949 and 1970 there were 20 coups in Syria," Wright says. "Iraq was in many ways almost as unstable with a series of coups that ultimately brought Saddam Hussein to power."

Sykes and Picot are often blamed for the many tragic events that followed their agreement, but Wright believes that is unfair. She says the problems the region grapples with didn't just come from the arbitrary creation of borders; these countries have also suffered from government repression.

"These were not countries in which civil society was allowed to bloom, [in which] diverse political parties were nurtured," she says.

In other words: The region had problems long before the Sykes-Picot agreement, and will continue to wrestle with problems for years ahead.

Seeking to understand what Middle Easterners would have liked the region to look like, in 2013 Wright spent a year speaking with people there. She asked them what their map of the Middle East would look like today.

"It was fascinating how people in the region, in looking at their future, deciding for themselves, carved out 14 different nations from the five that exist today," she says.

Identity politics, she says, are even more vibrant today than a century ago.